Carbon price no obstacle to deadly expansion of Australian coal (and gas), as new study finds replacing coal with gas will not lower rate of global warming for 100 years

Recently, the Labor member for Blaxland in the Australian Parliament, Jason Clare, fired a salvo at the Liberal opposition for their hypocrisy on carbon pricing: claiming it would cost coal jobs while they were busily…  investing in more coal.
Here’s an extract, courtesy of the Sydney Morning Herald:

In June last year, the Leader of the Opposition said that the carbon price would be 'the death of the coal industry'. [And yet] according to the Bureau of Statistics, in the year to September, spending on coal exploration has jumped 167 per cent. But it gets better than that. One in six members of the opposition have bought shares in coal or resource companies since we announced the carbon price … It gets better than that, [as revealed when] Senator [Arthur] Sinodinos, the new senator for NSW, lodged his statement of registrable interests. Senator Sinodinos is an impressive man. He was John Howard's policy brain, his right-hand man. He came out of Treasury; he understands government; he also understands the private sector. But … a month after the Leader of the Opposition told the country that this would be the death of the coal industry, Senator Sinodinos became the boss of a coal company. While the brawn of the Liberal Party is running around the country saying, 'This is going to kill the coal industry,' you have the brains of the Liberal Party becoming the boss of a coal company. It just goes to show what a bunch of hypocrites the Liberal Party really is. The people of Australia expect their government and their opposition to have plans for the future. They expect more than just a stop sign in a suit.

Clare’s spray was aided by a GeoScience Australia study, reported in The Sydney Morning Herald, which found that
And a study by Ernst & Young's Paul Murphy found that “coal dominated inbound investment in 2011, attracting $US11.3 billion from overseas compared with $US8.2 billion for all other commodities combine The coal exploration boom continued into the 2011 September quarter, when it reached a record $227 million – 167 per cent higher than for the same period in 2010.”  As "The Herald" politely noted:


…the extraordinary continuing growth in demand for coal for electricity and steel production in Asia challenges Prime Minister Julia Gillard's assertion the world is moving to cut greenhouse gas emissions.

It simply isn’t true that global emissions are headed down. The projections are particularly grim in Asia, as The Economist notes:


Asia has been responsible for over two-thirds of the growth in global energy demand over the past two decades…. China leads the world in coal production and consumption. It mines over 3 billion tonnes of coal a year, three times more than the next-biggest producer (America), and yet last year overtook Japan to become the world’s biggest coal importer. Over four-fifths of China’s electricity comes from coal-fired power plants. Burning coal is a big cause of the severe air pollution afflicting parts of China, and, through waste from coal-washing and underground leakage, of contaminated water and degraded soil…According to projections by McKinsey, a consultancy, even taking all this into account, China is still likely to consume 4.4 billion tonnes of coal in 2030, when its carbon emissions are expected to have increased from 6.8 billion tonnes of carbon-dioxide equivalent in 2005 to 15 billion tonnes. Of these nearly 40% will come from power generation. On current trends, as estimated by McKinsey, India’s carbon emissions will increase by about two-and-a-half times by 2030, by which time its power industry alone will account for about one-tenth of the total rise in global emissions. Like China’s government, India’s points out that, per head, its people will still be producing far less carbon dioxide than Americans or Australians (though China is rapidly catching up with some European countries in pollution per person). And, in India’s case, total emissions (at 5 billion–6.5 billion tonnes) will remain well below China’s.

In all of this, Australia is a very willing player. Last year, we wrote at the time of release of the proposed carbon legislation, that it is:


a compromise between players with different, and often opposing interests, and is far from being as ambitious and science-driven as the community climate action movement understands is necessary…. Statements from the prime minister that Australia's coal industry will continue to expand are frightening and suggest that some in the Labor government have chosen not to understand the depth and urgency of the climate change challenge. Real action on climate means winding down coal exports, and ensuring that no new coal mines are opened.”

As we reported in January, analysis from Guy Pearse finds that:


The expansion of Australian coal mining will add about 1.75Gt (gigatonnes) of carbon dioxide annually to the atmosphere – about 11 times what the Australian government estimates will be saved by the carbon tax legislation that recently passed Parliament.

If these trends persist, the world will head to global warming of 4 degrees or more this century, making the planet uninhabitable for most people and most species.
Even if the world adopted “green” forms of energy, it would take 50 years for global temperatures to stabilise, according to a new study by Myhrvold and Caldeira.
They find that even if we "pull out all of the stops" there is little we can do to diminish the impact of climate change during the first half of this century. But choosing to adopt the right technologies now should stabilize the climate by the second half of the century. This study does not consider carbon drawdown or geo-engineering, but it points to the inertia in the climate system: even as the energy imbalance is changed (by sharp emissions reductions), heat stored in the oceans will slow the rate at which global temperature is stabilised.
Myhrvold and Caldeira consider not only the emissions from various energy sources over their lifetime, but also the emissions involved in building the infrastructure for the various "lower" (than coal) emission options. This work is then integrated into a general climate model to provide an overview of the impact on temperature over decades and centuries of the various options. In summary, it is unique in using “a quantitative model … that includes life-cycle emissions and the central physics of greenhouse warming.” As the Carnegie Institute for Science story, where Caldeira works, explains:


In each case, Myhrvold and Caldeira found that to achieve substantial benefit this century, we would need to engage in a rapid transition to the lowest emitting energy technologies such as solar, wind, or nuclear power – as well as conserve energy where possible. The researchers found that it takes much longer to curtail the warming of the Earth than one might expect. And in the case of natural gas—increasingly the power industry’s fuel of choice, because gas reserves have been growing and prices have been falling—the study finds that warming would continue even if over the next 40 years every coal-fired power plant in the world were replaced with a gas-fueled plant.

In Myhrvold and Caldeira's own words (and clear in the accompanying graph, below):


Natural gas plants emit about half the GHGs emitted by coal plants of the same capacity, yet a transition to natural gas would require a century or longer to attain even a 25% reduction in HGE [ higher-GHG-emission, ie. coal  DS] warming. Natural gas substitution thus may not be as beneficial in the near or medium term as extrapolation from ‘raw’ annual GHG emissions might suggest. 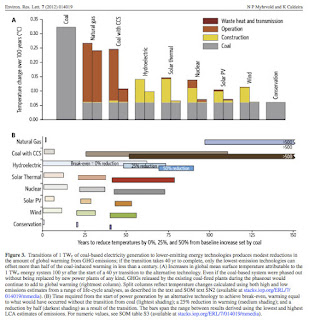 Myhrvold told Climate Central that because CO2 stays in the atmosphere for so long once it’s up there, a switch to natural gas would have zero effect on global temperatures by the year 2100. “If you take 40 years to switch over entirely to natural gas,” he said, “