Elwood: when poor planning and climate change collide at the coastline

If you wanted to see what happens when poor planning and climate change collide, the place to be last night was a floods forum in the Melbourne Bayside suburb of Elwood, which was subject to severe flooding a year ago.
The local mayor and councillors, MPs and neighbouring councillors all fronted up to a packed hall of 300 people, but there were two noticeable absences. Despite promising to come, no-one from Melbourne Water, which is responsible for the drainage system across Melbourne, actually turned up.  And the state government, which is ultimately responsible for planning, did not send a representative despite numerous requests, including on the floor of parliament.
Whilst much of the meeting was about community and local government responses, I was asked to specifically address what was the elephant in the room: the climate change aspects of the issue. Of course there are reasons why residents don't want to know the problem is going to get worse, but planning and actions can only sensibly proceed with an honest assessment of the problem, both now and it the future. In that sense, the ambivalences at the forum about wanting to understand how climate change will affect coastal communities reflect what is happening right around Australia's coast.
Here's the text of my remarks.

Many factors contribute to the Elwood flood problem. Poor planning in the 19th century means part of Elwood is built on a swamp, and natural drainage is now a concrete canal. Over-development in the catchment in Glen Eira has reduced the capacity of the earth to absorb downpours.
But I have been asked to speak about what will become the predominant influence on inundation and liveability in Elwood, and that is climate change. 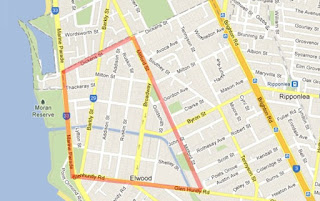 As our climate gets hotter, extreme events will become more common: heat waves, heavier rain, more intense bushfires and severe droughts, extreme melting at the poles.
In the last decade, we have seen an avalanche of extreme events: scientists attribute global warming to making more severe the 2003 summer heatwave which killed 50,000 mainly elderly people in France, the Russian fires in 2010 and the Texas drought, just to name three.
In Australia recently we have witnessed off-the-scale fires in Victoria, the wettest two years on record, record heat waves in Perth this year, extreme flooding events for two summers, and Cyclone Yasi. Last month Mt Buffalo received 525 millimetres of rain in a week. Imagine if that have been 200 kilometres further south, over Elwood!
Extreme events are at the boundary of what is possible with the climate. As the climate changes, those boundaries change. Climate change will be experienced as an escalating series of extreme climate events, until the extreme becomes the new norm.
With global warming, both the atmosphere and the oceans increase in temperature. Warmer air holds more water vapour (7 per cent more for each one-degree Celsius rise), and hence overall more rain and the likelihood of more intense storms, though the patterns will change.
Rising sea temperature drive more intense storms and higher wind speeds. Over the last two years, the Surface Sea Temperature around northern Australia has been at a record high, just as we have record rains and  records floods across north and eastern Australia. Tropical rains are being pushed further south over the summer period.
So how will this affect Elwood?
How much sea levels will rise is fundamental to planning the future of Elwood and the Bay.  The state government’s sea-level planning standard is a rise of less than a metre (0.8 metres) by 2100, and this is what local government and Melbourne Water have based most of their work on.
The federal government standard says a maximum of just over a metre (1.1 metres), but the most up-to-date science says sea levels rises this century could be up to 2 metres.
Up to 2 metres is what the science says, and you can’t plan on the hope that the worst possibilities won’t happen.
So how did 2 metres become 1.1 metres? The federal government’s 2009 report on “Climate Change Risks to Australia’s Coast” says that “Recent research… projected sea-level rise from 0.75 to 1.90 metres relative to 1990, with 1.1–1.2 metres the midrange”. Climate Minister Wong then told ABC Insiders that “1.1-metre ….is about the upper end of the risk”, and in June last year Minister Combet told ABC News that “The sea level rise of up to 1.1 metre…. is at the high end of the scenarios”.
So what should have been a 2-metre standard got whittled down to just 1.1 metre. In places like Singapore and London, planning is now based on sea level rises this century of 2 metres or more.
And in areas like Elwood, there is significantly reduced drainage capacity with even small sea-level rises. Recent modelling for the City of Port Phillip has shown that a 10-15cm sea level rise is equivalent to a 30 per cent reduction in drainage effectiveness in some parts of the city. And the bigger picture is that the City of Port Phillip has over 9000 addresses within three kilometres of the coastline, and below four metres in elevation.
Two issues stand out as important for local residents:
And the Victorian Government makes it worse by refusing to give coastal shires any more funding to manage the risk of future sea level rise, whilst leading the charge to expand the State’s dirty brown coal industry.