The Paris climate agreement goal of limiting global warming to 1.5 to 2 degrees Celsius (ºC) is well above temperatures experienced during the Holocene — period of human settlement over the last 11,700 years — and is far from safe because “if such temperature levels are allowed to long exist they will spur “slow” amplifying feedbacks… which have potential to run out of humanity’s control.” 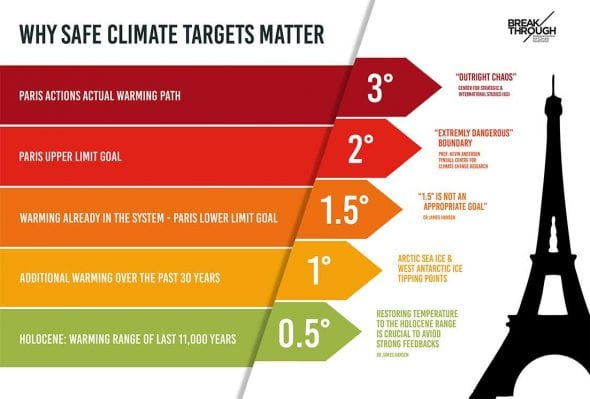 A failure of imagination on climate risks

By Ian Dunlop and David Spratt


This is an extract from Disaster Alley: Climate change, conflict and risk published recently by Breakthrough.

Climate change is an existential risk that could abruptly end human civilisation because of a catastrophic “failure of imagination” by global leaders to understand and act on the science and  evidence before them.

At the London School of Economics in 2008, Queen Elizabeth questioned: “Why did no one foresee the timing, extent and severity of the Global Financial Crisis?” The British Academy answered a year later: “A psychology of denial gripped the financial and corporate world… [it was] the failure of the collective imagination of many bright people… to understand the risks to the system as a whole”.

A “failure of imagination” has also been identified as one of the reasons for the breakdown in US intelligence around the 9/11 attacks in 2001.

A similar failure is occurring with climate change today.