Further, the platform  acknowledges the scale of the threat to be so large that it will require a leadership response from our country on the scale of our national mobilization to confront the threat of fascism during WWII.  The platform language I offered through an amendment entitled, "Global Climate Leadership", explicitly acknowledges that anything short of that will bring catastrophic consequences to civilization:

Emergency action is only sane response to escalating climate impacts

In 2010, Malcolm Turnbull said: "Our efforts to deal with climate change have been betrayed by a lack of leadership, a political cowardice, the like of which I have never seen...". Nothing has changed. Turnbull has betrayed his own words.

Australians understand an emergency: a situation of threat or escalating threat with severe consequences for life and property that requires urgent preventive intervention.
Read more » 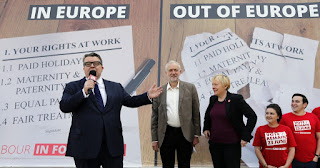