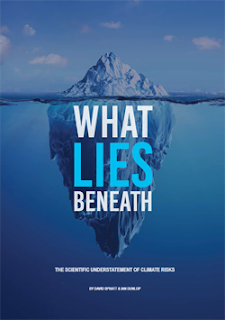 What Lies Beneath: The scientific understatement of climate risks

by David Spratt and Ian Dunlop

Human-induced climate change is an existential risk to human civilisation: an adverse outcome that would either annihilate intelligent life or permanently and drastically curtail its potential.

Special precautions that go well beyond conventional risk management practice are required if the “fat tails” — the increased likelihood of very large impacts — are to be adequately dealt with. The potential consequences of these lower-probability, but higher-impact events would be devastating for human societies.

The bulk of climate research has tended to underplay these risks, and exhibited a preference for conservative projections and scholarly reticence, albeit increasing numbers of scientists have spoken out in recent years on the dangers of such an approach.

Climate policymaking and the public narrative are significantly informed by the important work of the Intergovernmental Panel on Climate Change (IPCC). However, IPCC reports also tend toward reticence and caution, erring on the side of “least drama”, and downplaying more extreme and more damaging outcomes. Whilst this has been understandable historically, given the pressure exerted upon the IPCC by political and vested interests, it is now becoming dangerously misleading, given the acceleration of climate impacts globally. What were lower-probability, higher-impact events are now becoming more likely.

This is a particular concern with potential climatic “tipping points” — passing critical thresholds which result in step changes in the system — such as the polar ice sheets (and hence sea levels), and permafrost and other carbon stores, where the impacts of global warming are non-linear and difficult to model at present. Under-reporting on these issues contributes to the “failure of imagination” that is occurring today in our understanding of, and response to, climate change.

If climate policymaking is to be soundly based, a reframing of scientific research within an existential risk-management framework is now urgently required. This must be taken up not just in the work of the IPCC, but also in the UN Framework Convention on Climate Change negotiations if we are to address the real climate challenge.

Current processes will not deliver either the speed or the extent of change required.

Read Policymakers need to look at the real climate risks

Read What lies beneath? The scientific understatement of climate risks