Policymakers need to look at the real climate risks


This blog is an extract from What Lies Beneath: The scientific understatement of climate risks, just published by Breakthrough, the National Centre for Climate Restoration.

Conferences of the Parties (COPs) under the UNFCCC are political fora, populated by professional representatives of national governments, and subject to the diplomatic processes of negotiation, trade-offs and deals. In this sense, the COPs are similar in process to that of the IPCC by which the Summary for Policymakers is agreed. The decision-making is
inclusive (by consensus), making outcomes hostage to national interests and lowest-common-denominator politics.

The COP 21 Paris Agreement is almost devoid of substantive language on the cause of human-induced climate change and contains no reference to “coal”, “oil”, “fracking”, “shale oil”, “fossil fuel” or “carbon dioxide”, nor to the words “zero”, “ban”, “prohibit” or “stop”. By way of comparison, the term “adaptation” occurs more than eighty times in 31 pages, though responsibility for forcing others to adapt is not mentioned, and both liability and compensation are explicitly excluded. The Agreement has a goal but no firm action plan, and bureaucratic jargon abounds, including the terms “enhance” and “capacity” appearing more than fifty times each.

The proposed emission cuts by individual nations under the Paris Agreement are voluntary (unilateral), without an enforceable compliance mechanism. In this sense, the Agreement cannot be considered “binding” on signatories. The voluntary national emission reduction commitments are not critically analysed in the Agreement , but noted to be inadequate for limiting warming to 2°C.

The Paris voluntary national commitments would result in emissions in 2030 being higher than in 2015 and are consistent with a 3°C warming path, and significantly higher if the warming impacts of carbon-cycle feedbacks are considered. Unless dramatically improved upon, the present commitments exclude the attainment of either the 1.5°C or 2°C targets this century without wholly unrealistic assumptions about negative emissions. 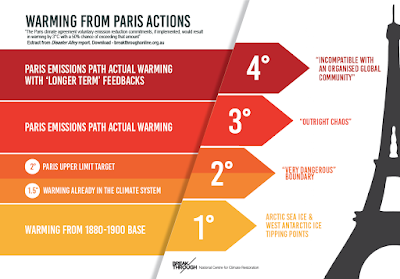