A review of The Coal Curse – Resources, Climate and Australia’s Future by Judith Brett, Quarterly Essay 78.

The first part of Coal Curse is a masterly dissection of Australian economic history since WW2.
It brings into sharp focus the divide between the protectionist – primary producer and manufacturing – forces of the immediate post-war period and the gradual shift to a neoliberal globalist model which favoured the mining sector.  The transition was marked by the Hawke/Keating 1983 decision to float the dollar, and Paul Keating’s “Banana Republic” outburst three years later as commodity prices and the exchange rate fell, illustrating the dangers of an overly rigid economic system being left too late to reinvent itself in a rapidly globalising world.

Luckily, economic expansion in Asia in the 1970s, 80s and 90s provided relief as demand for primary products soared – agriculture as before, but increasingly minerals and fossil fuels, notably coal and most recently gas.

“Fear” versus “hope” in #climate communications. How about brutal honesty? 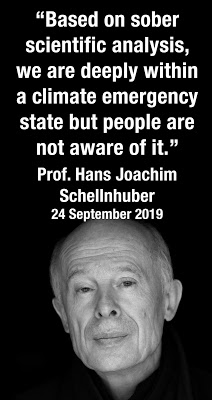 “Fear” versus “hope”. It can be a sterile debate, with straw figures and mischaracterisations, none more frequent than the claim that "fear" messages involve alarmism or an exaggeration of the published literature. But that is not often the case and in my experience cries of "alarmism" generally reflect a lack of knowledge of the brutal truth about the existential risks of climate disruption.

After a year of unprecedented bushfires and a world turned upside down by Covid-19, there is a need for positive news, but that should not involve a collapse into bright-siding, the belief that you can control your outlook with relentless positive thinking and a sunny disposition, and by refusing to consider negative outcomes. It requires deliberate self-deception.  Barbara Ehrenreich says of the US that believing the country impervious to a 9/11-style attack (or Covid-19), and incapable of failure in Iraq or a Wall Street crash, can exist because there was no inclination to imagine the worst, as well as the best. In the end, bright-siding strips away critical analysis. As Ehrenreich says, enforced optimism obstructs the progressive agenda, producing an enforced stupidity. In other words, optimism is conservative, while realism and forthrightness are progressive.

The full thread is:

Canary in the coalmine: A former senior fosil fuel executive speaks out

This post is the introduction, by Ian Dunlop, to the publication this week by Breakthrough of a collection of Ian's media commentary articles.  Ian is is a senior member of the Breakthrough Advisory Board and a Member of the Club of Rome. He was formerly an international oil, gas and coal industry executive, chair of the Australian Coal Association and CEO of the Australian Institute of Company Directors. He is co-author of “What Lies Beneath: the understatement of existential climate risk”, and of the Club of Rome’s “Climate Emergency Plan”.

This publication brings together some of my commentaries over the last three years on the need for real action on climate change. Not the normal variety of political action, but an emergency approach, akin to a wartime level of response, which before long will have to be adopted as impacts escalate around this hot, dry and vulnerable continent, and around the world.

Climate change is now an existential risk to humanity which, unless addressed immediately as a genuine emergency, will likely destroy civilisation as we know it within decades. We are not going to let that happen.