This site was prompted by the publications in 2008 of Climate Code Red: The case for emergency action by Philip Sutton and David Spratt. The aim of the site is to:
It has also incorporated material from the Carbon Equity and Climate Action Centre sites.

David Spratt has been Research Coordinator for the Breakthrough National Centre for Climate Restoration (Melbourne) since 2014. He was co-founder of the Climate Action Centre (2009-2012). His writing have appeared in "The Guardian, “The Age”, “Rolling Stone”, “Energiewende Magazin" and "The Bulletin of Atomic Scientists", amongst others, and online sites including Climate Spectator, Crikey, Renew Economy and New Matilda. He blogs at climatecodered.org on climate science, existential risk, IPCC reticence, the climate emergency and climate movement strategy and communications, and is regular public speaker. He has previously worked managing businesses specialising in research and journalism, book production and graphic design. 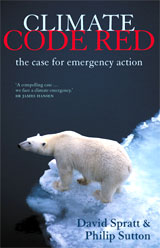 About Climate Code Red the book

The book in a nutshell...

Climate policy is characterised by the habituation of low expectations and a culture of failure. There is an urgent need to understand global warming and the tipping points for dangerous impacts that we have already crossed as a sustainability emergency, that takes us beyond the politics of failure-inducing compromise. We are now in a race between climate tipping points and political tipping points.

What people are saying...

"Having read this book ...there is no doubt in my mind that this is the greatest problem confronting mankind at this time and that it has reached the level of a state of emergency. ... [E]ducation of the public is critical to ensure that they understand the dimensions of the tasks and the consequences of failure. This book helps in that educative process. Please read it. "
Professor David de Kretser, Governor of Victoria
Download Professor David de Kretser speech launching the book

'Perhaps the two most outstanding books on global warming to have been published lately are The Hot Topic .. and Climate Code Red. Were I a philanthropist, I would purchase several hundred copies of both and send them to our politicians and policy-makers.'
Robert Manne, The Monthly, August 2008