This is one of those moments when the pace of climate change and its consequences become simply extraordinary.
In the last two weeks, I’ve spent some time trying to unravel the Arctic’s big melt of 2012 and what is means for future global warming and the world we will live in.
It’s not territory for the faint-heartened, and one of the world’s foremost Arctic experts has stepped up to make a big call, a really big call.

There's half as much sea-ice as there was 30 years ago and the annual summer melt keeps smashing records. David Spratt on why Australian policy-makers should be paying attention.

In the last few days something so dramatic has happened in the Arctic that it demands another look at Australia's climate policies.
On Friday 24 August, annual summer melting of the floating sea-ice in the Arctic Ocean smashed the previous record, with another three weeks of the melt season still to to go. Scientists are calling it "stunning" and "astounding". This breaks the record set in 2007. Back then there were scientific gasps that the sea ice was melting “100 years ahead of schedule”.
Thirty years ago, the summer sea-ice extent was around 7.5 million square kilometres (similar to area of Australia), but this year it will end up at half that figure.  And the ice is becoming thinner, due to melting from below by warmer seas, and the relentless loss of thicker, multi-year ice. So the volume of the summer ice will in 2012 be only around one quarter of what it was three decades ago.  Now it looks like the sea-ice  will be gone in summer within a decade or so, maybe sooner.  That's what many of the cryopshere scientists and models are saying.


UPDATE 27 AUGUST: Sunday's data confirms that the previous sea-ice extent minimum of 24 September 2007 was broken last Friday, 24 August 2012. What is also stunning are sea-ice daily extent figures averaging ice loss of more than 100,000 square kilometres per day for the last four days. This suggest melt is accelerating very late in the melt season in a pattern that has never before been observed. The Arctic this year is heading into new territory and it looks like 2012 may in retrospect be seen as the year when a new melt regime took hold.
The ice extent is about to drop below 4 million square kilometres for the first time in the satellite record, and the Arctic has shed almost half a million square kilometres of sea-ice in last five days! With three weeks of the melt season still to go, it's not hard to see extent dropping another half a million square kilometres (or more!) to 3.5 million square kilometres. (In previous big melt years of 2007 and 2011, around half a million square kilometres was lost after 26 August.)
This is starting to make the second graph (below) looking reasonable, and those scientists and models which have been suggesting an sea-ice-free summer Arctic within a decade to be on the money.
The commentary by Climate Commissioner Prof. Will Steffen in today's newspapers that ''We can expect to see an ice-free Arctic at about the middle of this century'' looks out of touch with the most recent data, and exhibits IMHO a scientific reticence which does a disservice to the urgent public debate we need on implications of the Arctic melt for Australian climate policy (and sea-level rises from Greenland!). Positive feedbacks now have a grip on Arctic sea-ice and the descent appears to be exponential, not linear. Looking at the PIOMASS date on sae ice volume (fifth chart here), its hard to know what Prof. Steffen  has based his assertion upon.
Perhaps the enormity of the present situation is best summed up by sea-ice blogger Neven: "Basically, I'm at a loss for words, and not just because my jaw has dropped and won't go back up as long as I'm looking at the graphs. I'm also at a loss - and I have already said it a couple of times this year - because I just don't know what to expect any longer. I had a very steep learning curve in the past two years. We all did. But it feels as if everything I've learned has become obsolete. "

Climate change impacts are frequently happening more quickly and at lower levels of global warming than scientists expected, even a decade or two ago. And this week the Arctic has provided a dramatic and deeply disturbing example.
According to IARC/JAXA satellite data at Arctic Sea-ice Monitor from the Japan Aerospace Exploration Agency, the sea-ice extent of 24 August 2012 of 4,209,219 square kilometres broke the previous record in the satellite era of 4,254,531 square kilometres set on 24 August 2007. Back then the were scientific gasps that the sea ice was melting “100 years ahead of schedule”.

Arctic sea-ice melt record more than broken, it’s being smashed
http://www.climatecodered.org/2012/08/arctic-sea-ice-melt-record-more-than.html
David Spratt, ClimateCodeRed, 25 August 2012
Climate change impacts are frequently happening more quickly and at lower levels of global warming than scientists expected, even a decade or two ago. And this week the Arctic has provided a dramatic and deeply disturbing example.

Arctic heads for record melt, but do we want to know?

Update to: Dramatic lessons from the Arctic big melt of 2012: It's already too hot, as Greenland melt record is smashed
Related post: US Media Turn A Blind Eye To Record Greenland Ice Melt

Two extraordinary events at the end of last week say a lot about the state of the climate change conversation in Australia.
The first was data from US Arctic researcher Prof. Marco Tedesco showing that melting over the Greenland ice sheet had shattered the seasonal record on 8 August, a full four weeks before the close of the melting season (following image). The melting season lasts until the second week of September each northern summer, so this result is stunning: "With more yet to come in August, this year's overall melting will fall way above the old records. That's a goliath year -- the greatest melt since satellite recording began in 1979," said Tedesco.

Dramatic lessons from the Arctic big melt of 2012: It's already too hot, as Greenland melt record is smashed

Related post: Arctic heads for record melt, but do we want to know?


UPDATE 21 August: RECORD SEA-ICE MELT: The Arctic big melt is charging along and a number of data sets today show that 2012 has broken the 2007/2011 record for minimum sea-ice extent / area. These include data sets from Arctic ROOS and Cryosphere Today. This closeup from Neven of the Cryosphere Today data is very clear:


Cryosphere Today data set shows:
So it looks like the record has been smashed with another 3 weeks to go in the melt season.  This is almost as extraordinary as the Greenland record melt story below.

Beyond Coal and Gas Forum

Over the weekend of 28-29 July, over 80 people from all over Queensland, along with some visitors from NSW and Victoria, gathered just south of Mackay to learn about and discuss the impacts of the Central Queensland coal and CSG boom on our environment, communities and economy at the Beyond Coal and Gas Forum. 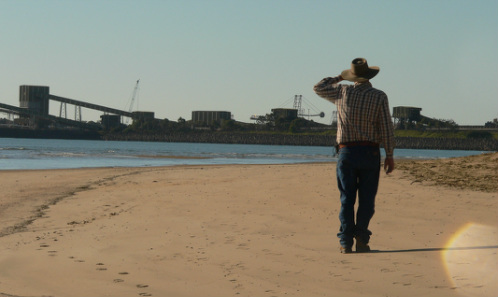 The weekend was an extremely energising event. Participants went home feeling more powerful and optimistic about their chances of protecting their communities and their livelihoods from the impacts of the massive boom in coal and CSG that is planned for Central and North Queensland.

Are we experiencing more extreme hot weather due to climate change? The evidence is in.