New study on climate sensitivity not what poor media headlines, deniers are saying

One swallow doesn't make a spring, and nor does one scientific paper change a whole body of evidence. But you could be mistaken for thinking so after the poor media coverage last week of a new piece of climate research.

A study published last week in Nature ("Emergent constraint on equilibrium climate sensitivity from global temperature variability") claims to tighten the Intergovernmental Panel on Climate Change (IPCC), range for (short-term) Estimated Climate Sensitivity (ECS), the amount of warming to be expected from a doubling of carbon dioxide  (CO2) in the atmosphere.

New research has challenged the view that wood bioenergy is carbon neutral, and shows that wood pellets burned in European and UK power plants actually emit more carbon dioxide (CO2) per kilowatt hour than that generated by coal.

This is because wood is both less efficient at the point of combustion and has larger processing and supply chain emissions than coal. Their research shows that using wood instead of coal in power generation increases the amount of CO2 in the atmosphere, worsening climate change until—and only if—the harvested forests regrow. 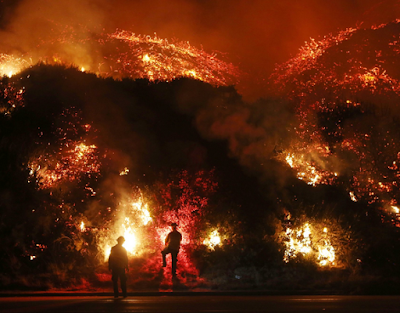 Much of what happened in 2017 was predictable: news of climate extremes became, how can I put it … almost the norm. There was record-breaking heat on several continents, California’s biggest wildfire (extraordinarily in the middle of winter), an ex-tropical cyclone hitting Ireland (yes, Ireland) in October, and the unprecedented Hurricanes Harvey, Irma and Maria that swept through the Atlantic in August. The US government agency, the NOAA, reported that there were 16 catastrophic billion-dollar weather/climate events in the USA during 2017.

And 2017 “marks the first time some of the (scientific) papers concluded that an event could not have occurred — like, at all — in a world where global warming did not exist. The studies suggested that the record-breaking global temperatures in 2016, an extreme heat wave in Asia and a patch of unusually warm water in the Alaskan Gulf were only possible because of human-caused climate change”, Reuters reported.