A detailed statement outlining the savings measures or cuts that would be made by the Coalition has been released by the opposition's finance spokesman Andrew Robb.
Based on the content of the statement it seems the Coalition would cut over $1.5 billion in climate related funding set out in the Budget over the forward estimates (next four years). This includes the $653 million renewable energy and energy efficiency fund announced in the Federal Budget.
In addition they would also reduce funding to the Carbon Capture and Storage Flagships Program by $200 million.
Further evidence that the Coalition like Labor don't have a real plan to tackle climate change. 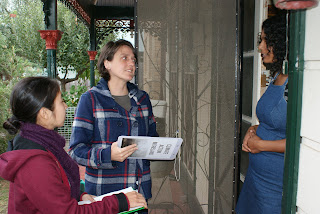 Hundreds of residents of the city of Moreland found out about the campaign to Replace Hazelwood with Clean Energy and signed our petition.

Many commited to asking the local Labor candidate where she stood on the Hazelwood election test.

More door knock days are planned for inner city electorates to find our more sign up for email updates and keep an eye on the Replace Hazelwood page of the Climate Action website.

10 lessons for the climate movement

For the 2009 climate summit, I wrote a short article titled “Looking back - moving forward: ten lessons for the climate movement”. It attempted to articulate some of the challenges and opportunities for the community climate movement after two years of rapid growth in scope and capacity.

A lot has happened since the last summit: the dominance of the debate on the government’s carbon-trading plan, the failed Copenhagen conference, the division over climate in the Liberal Party and the emergence of the climate denier Tony Abbot as leader. In many ways the harsh reality of the terrain in which we are working is even more stark than it was a year ago, and requires us to face up to the enormous challenge we face.