NASA climate science chief James Hansen’s description of the aerosol dilemma as a “Faustian bargain” has been dramatically illustrated in a new scientific paper by Damon Matthews and Kirsten Zickfeld and published in Nature on 4 March 2012. As we previously discussed in Beyond the carbon price, a Faustian bargain:


Human activity modifies the impact of the greenhouse effect by the release of airborne particulate pollutants known as aerosols. These include black-carbon soot, organic carbon, sulphates, nitrates, as well as dust from smoke, manufacturing, wind storms, and other sources. Aerosols have a net cooling effect because they reduce the amount of sunlight that reaches the ground and they increase cloud cover. This is popularly known as "global dimming", because the overall aerosol impact is to mask some of the warming effect of greenhouse gases. Aerosols are washed out of the atmosphere by rain on average every 10 days, so their cooling effect is only maintained because of continuing human pollution, the principal source of which is the burning of fossil fuels, which also cause a rise in carbon dioxide levels and global warming that lasts for many centuries.


Now, in “Climate response to zeroed emissions of greenhouse gases and aerosols”, Matthews and Zickfeld show that when aerosols and other greenhouse-gas emissions, as well as carbon dioxide,  are eliminated from the atmosphere [their modeling assumes all at once, in the year 2010] to "zeroed emissions":


…global temperature increases by a few tenths of a degree over about a decade, as a result of the rapid removal of present-day aerosol forcing. This initial warming is followed by a gradual cooling that returns global temperature to present-day levels after several centuries, owing to the decline in non-carbon dioxide greenhouse-gas concentrations.

And that's the Faustian bargain. We have continued our profligate use of fossils fuels and benefited from the temporary cooling that the associated aerosols production provides,  and now the urgent need to stop burning fossil fuels to avoid catastrophic global warming will push up global warming "a few tenths of a degree over about a decade" as the aerosol effect is lost.
If the reduction to zero emissions occurred over a decade or two or three, I don’t think the result would be much different, because the modelling shows it takes centuries to return to present day temperature.
As Hansen has noted, quantifying the amount of aerosol cooling is not easy, and Matthews and Zickfeld also show that


… that the magnitude of the peak temperature response to zero future emissions depends strongly on the uncertain strength of present-day aerosol forcing. Contingent on the climate and carbon-cycle sensitivities of the model used here, we show that the range of aerosol forcing that produces historical warming that is consistent with observed data, results in a warming of between 0.25 and 0.5C over the decade immediately following zeroed emissions.

But it seems likely, following Hansen et al, that the aerosol magnitude is higher rather than lower, and the effect will be closer to the upper bound of 0.5C.

The bottom line is:
This research is unique in that previous work has concentrated on answering the question: what happens if carbon dioxide emissions (and not all greenhouse forcings) are reduced to zero? As the authors note:


The duo used an earth system climate model developed by the University of Victoria to study the impact of greenhouse gas and aerosol emissions on the world's climate. The study was based on emission levels that are consistent with data from the 2007 report of the Intergovernmental Panel on Climate Change.
The removal of aerosols from the atmosphere would cause additional global warming in the short term, if all of those emissions were removed now.
"The widespread presence of aerosols in the Earth's atmosphere is effectively acting like a solar radiation blocking blanket right now," explains Zickfeld.
"It's preventing the Earth's temperature from responding to the real effects of global warming. But once that aerosol-based blanket is removed the temperature will rise."
Due to the emission of greenhouse gases, the world's temperature has warmed by almost 1C since the beginning of the industrial era. The study finds that elimination of all emissions would lead to an additional short-term warming by 0.25 to 0.5 degrees.
"One to 1.5 degrees of global warming may not seem like a great deal," says Zickfeld. "But we need to realize that the warming would not be distributed equally over the globe, with mid to high latitude regions such as Canada, Alaska, northeastern Europe, Russia and northern China being most strongly affected.
"Our research shows that as a result of past emissions, a warming of at least 2C will be unavoidable in those regions."

The immediate impact of zeroed emissions (first decade) is shown in (a) of illustration below, longer time frame of two centuries in (b). It is clear, as author say, that the warming is not uniform, but concentrated in the northern hemisphere and particularly the Arctic, with the obvious consequences. 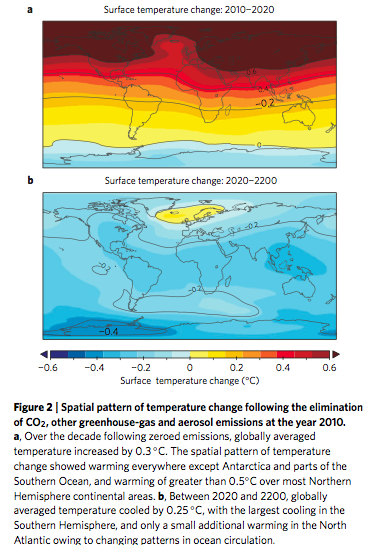 Whatever way you look at these results, the conclusion remains the same: human greenhouse emissions need to be reduce to below zero (zero emissions and carbon drawdown) because the impacts of just the current levels of greenhouse gases (at least 2 degrees of warming and perhaps 3 degrees with positive feedbacks), let alone the future emissions that are structured into the world economy, are more than sufficient to wreck the planet and human habitation, and produce sea level rises in the tens of metres over time. And at present we are heading towards an unimaginable 4 degrees of warming this century. Let me re-emphasise: there is NO alternative to zero emissions and carbon drawdown if we are to return to a safe climate. Because some of the non-CO2 gases, such as methane, are short-lived, there is an argument for giving top priority to their mitigation.
The authors note in their paper that:


there are a range of possible future emissions scenarios that give reasonable odds of maintaining global temperature below the 2C target, such as the low-emissions scenarios included in the new set of representative concentration pathway scenarios.

but in media commentary Zickfield, knowing that emissions are still rising rapidly and zeroed emissions aren't even on the radar of most nations, also says that


Even with aggressive greenhouse gas mitigation, it will be a challenge to keep the projected global rise in temperature under 2 degrees Celsius.

Given the impacts of 2-degrees of global warming, it is possible that incoming solar radiation management (or geo-engineering) to replace the solar radiation management lost with the aerosols, in conjunction with zero emissions, MAY be the least worst option for some time.
Two degrees, for instance, is more than enough to push Greenland past its tipping point, according to new research reported by AFP:


The Greenland ice sheet is more sensitive to global warming than thought, for just a relatively small — but very long term — temperature rise would melt it completely, according to a study published. Previous research has suggested it would need warming of at least 3.1 degrees Celsius above pre-industrial levels, in a range of 1.9-5.1C, to totally melt the ice sheet. But new estimates, published in the journal Nature Climate Change, put the threshold at 1.6C, in a range of 0.8-3.2C, although this would have to be sustained for tens of thousands of years.

That’s right, the tipping point for total loss of Greenland's ice sheet is likely around 1.6C of warming.  I’ll blog separately about this paper soon.
As we have previously reported, Jim Hansen’s work makes it clear that anything above the Holocene maximum (of around 0.5 degrees above the pre-industrial temperature) makes it difficult to preserve a safe climate, and that we have already gone too far with emissions.  The notion that 1.5C or 2C is a safe target is out the window, and even 1 degree looks like an unacceptably high risk. Hansen says that at current temperatures, there is no "cushion" left to avoid dangerous climate change, and "... even small global warming above the level of the Holocene begins to generate a disproportionate warming on the Antarctic and Greenland ice sheets."
On Greenland, this new finding of a 1.6C tipping point makes Hansen's predictions look all too true, as they do for West Antarctica.  The work of Matthews and Zickfeld is a sober reminder of the choices we face.