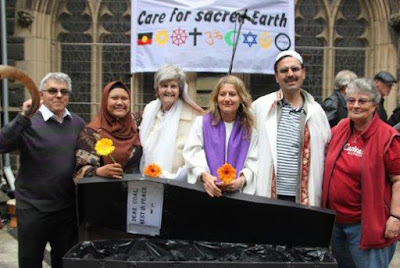 By David Spratt and David McKnight

Mass rallies, marches and protests have been and are a vital feature of social, liberation and democratic movements around the world: campaigning against injustice, exploitation and destruction and for fairness, democracy and conservation. The mass events organised by social movements are a public expression of common purpose and people power, helping to foster alliances, tell the stories of struggle, and demand change at important moments.

They are not just an event in time, but an expression of the political and organisation unity so far achieved, and a vehicle for extending that work. Coalition building is central to building powerful movements. Alliances between unions, religious and community groups, health and other professionals as well as environmental and climate groups are vital.
Organising lessons may fade over time as personnel and organisations churn. Here we reflect on some understandings from participating in the organising of such events over several decades, including peace and anti-war movements, for human rights and social and economic justice, in support of liberation struggles, and in the successful November 2015 People's Climate Marches. Some of these learnings may seem obvious, but that does not stop them from being overlooked.  This list is far from comprehensive!
BUILDING PARTNERSHIPS AND ALLIANCES

Start early. If effective networks are in place, a minimum time for organising a mass public event is at least three months. If networks and relationships need to be built and re-energised from a low base, six months is a minimum because much of this work cannot be rushed if the structures are to be built and sustainable for the longer-term.

Partner relationships takes time.  Partnerships and alliances often take a large amount of face-to-face organising time to deliver in full. Last-minute partners are generally low value, because it takes time for even well-organised partners to develop the internal momentum as well as implement strategies for active engagement of their members/supporters/base.

Organise by sector and build cross-sector cooperation. Newer partners may be more comfortable working with people and organisations they already know from within their sector, at least initially. Take the time to develop trust and common purpose. Differing sectors need differing forms of engagement. There is not one process that fits all sizes.

Partner actions count, not words. Reasonable compromise is necessary from all participants to achieve a common path.  Organisational self-interest is disabling when the needs and claims of individual organisations are placed above the interests of making common purpose. If an organisation demands certain privileges as a condition of their participation, you may be better off without them.

Be clear early about fundamentals.  Having clarity early in proceedings about the events fundamentals (politics, purpose, organising methods and decision-making structure) will save a lot of confusion, time and pain down the track, especially if these understandings are in a (brief rather than ponderous) written form. In the first instance, clarity may be better achieved in one-to-one conversations with the foundation partners, rather that throwing everyone around a table.

Broad-based structures. The key decision-making structure/s should be genuinely representative of the broad constituency.  The diversity of participants needs to be expressed, and branding events to one organisation can be politically self-defeating because it dampens participation and future work.  Keep everybody up-to-date regularly with what's happening, new plans, ideas for local activism, and how the movement is developing.

City-level organising is crucial. Over many decades the experience in Australia has been that if you organise Melbourne and Sydney, the rest follows. National organising is of necessity largely digital and thus has significant limitations as compared to the more intimate city or regional level, which in any case is where most of the implementation activity occurs. Devolve to the city/regional all that can be, within some common national perspectives and tasks.

Build a core of skilled organisers with trust and clear responsibilities, including a lead organiser. Don't be afraid to identify leadership roles. Undifferentiated collective leadership can result in tasks falling between the cracks.  The event outcome is significantly dependent on the number of people with reasonable organising experience who can work together in a cooperative and trusting manner, together with the capacity to attract and empower a diverse volunteer base.

Face-to-face, door-to-door. Quick-hit, forgotten-tomorrow digital marketing has severe limitations. Building valuable long-term relationships and engagement is primarily a face-to-face and labour intensive task, whether at the partner/alliance level or at the community level. Partnerships and participation drawn only from online processes deliver fewer benefits.

Centralise the core (communications, event management) functions, and decentralise everything else you can. Social movements more than ever include large professional NGOs with limited or no internal democratic processes, centralising tendencies, and a significant brand and money-raising focus.  It can be hard to let go, but decentralising everything you reasonably can is a key to building participation, diversity and ownership of the event.

Communications is tricky. Communications is easy to do badly, and often is. It is likely many people will consider themselves to be skilled in the area, when most are not, so large committees developing and implementing communications strategy  are likely to be painful and produce poor outcomes, but leaving it to one non-accountable professional is also dangerous. Find a way for a few who are experienced and respected in the field to do the work, and start early.

Build participation.  Encourage and build a structure of events leading up to the day, and a path afterwards. Provide ideas and resources for local activity. Let a 1000 flowers bloom. On the day, sector and another specific-audience feeder marches before the main event can build attendance.

Get people there any way you can. Hit hard once they are there.  Messaging up to the event is designed to maximise attendance. Messaging on the day of the event is for the story you want to tell, and what's next to do.

Speakers selection should be based on four criteria: capacity to attract attendance (if speakers are part of advertising), newsworthiness, taking participants on the next steps in movement building, and diversity. No sector or organisation has a "right" to speak.  Keep speeches short and limited in number. It's not a picnic. Find some edge. Make news.

Keep it simple on the day. Complicated plans for the event run a significant risk of failure because large events are somewhat uncontrollable, so focus on the basics (stage, sound, security, front of march, media) and don't worry too much for the rest. People will be creative in how they attend, their banners and costumes and stunts. Make sure the audio system is the best you can afford, and that marshals have clear responsibilities.

What's next?  So you have 50,000 people on the street. What's the plan for them for the next week, month, year? The most important outcome of the day is for participants to go away motivated for the next stage of the campaign, and knowing what that means for them.