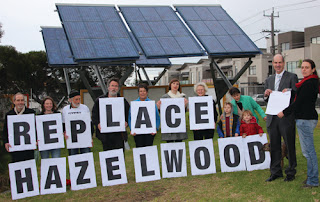 Victorian Premier Dan Andrews says he wants to be a leader on climate change, but he has no plan to retire dirty coal generators.

Coal generation over-supply is squeezing out significant expansion of renewable energy, so a renewable policy without a coal policy won't guarantee a fall in Victoria's emissions.

Alcoa is pushing hard for a new fossil fuel subsidy from the Victorian state government for its Portland aluminium smelter. If it succeeds, it will lock in a highly-polluting scheme at the expense of government support for the renewable energy industry.

On 15 December 2014, "The Age" reported Big polluter to plead for taxpayer cash:


Aluminium giant Alcoa, which has cost Victorian taxpayers billions of dollars over four decades, is expected to press in the new year for a new package of government support. If Labor agrees, it could mean hundreds of millions more in taxpayer money going to a massive global company — this despite Brumby government assurances five years ago that subsidies would end in 2016.

And the lobbying is well under way:

The push comes as a 30-year agreement for Victorian government subsidies to Alcoa's electricity price expires this year, having cost taxpayers an estimated $100 million a year and more than three billion dollars in total.

If taxpayers were to underwrite a new $100 million subsidy, that would represent a state government wage subsidy of around $140,000 per employee for Portland's 700 employees. In essence, Alcoa is asking the Victorian taxpayer to pay its Portland wages bill.

Alcoa is the single largest consumer of the state's brown-coal fired electricity. This new fossil fuel subsidy would help keep open the most-greenhouse-gas-intensive coal-fired power stations in Australia, situated in the Latrobe Valley.

Those power stations include Hazelwood, Australia's dirtiest. As the Alcoa subsidy ends, there is a perfect opportunity for the $100 million a year to be switched to new job and industry-creation initiatives in Portland, and in the Latrobe Valley in funding a just transition as brown-coal generating capacity is reduced.

The question is whether Victoria will encourage new economy jobs and investment or prop up ageing and highly-polluting power stations in the Latrobe Valley at the expense of other industries.  $100 million a year for another 20 years is two billion dollars the state government will not spend on the transition to renewable energy.

The Portland smelter is a joint venture owned 55% by Alcoa World Alumina and Chemicals, and 22.5% each by CITIC and Marubeni; and managed by Alcoa. It has a nameplate capacity of 358,000 metric tonnes per year.

With the 30-year agreement scheduled to end in October 2016, Loy Yang B power station (owned by AGL) signed a contract in 2010 to supply electricity to power the Portland aluminium smelters till 2036. From November 2016, the price would be around $20 per megawatt hour higher that the current, subsidised price.

With the current low aluminium prices, Macquarie Wealth Management (MWM) says in a 13 January 2016 research report that the higher power cost "brings into question the viability of the (Portland) plant" and "Closure is just one option for Alcoa", as would delaying the increased power cost.   However if AGL were to reduce the cost, it would need "some compensation". Which could well come from a new state government subsidy?

In fact, those concerned about "market efficiency" should leave this conundrum to the market to resolve.

One-fifth of Alcoa's global operating capacity, of around 400,000 tonnes, is considered high-cost and is currently unprofitable (negative EBITDA).  MWM estimates Portland made a loss of $30-40 million in 2015. The higher power price from November 2016 would increase Portland's annual costs by an estimated $90 million per year, taking annual losses past $100 million a year.

The maritime union is currently fighting actions by Alcoa to replace Australian crew on the shipping of raw material to Portland with lower-wage crews from Asia.

If there is no state government handout and low aluminium prices continue, the likelihood of Alcoa closing or moth-balling Portland increases.
This would reduce electricity demand in Victoria by 10 per cent, and the increase in generation oversupply in Victoria would likely force a rationalisation in the Latrobe Valley, with either Hazelwood or Yallourn closing.

The consequence would be a decrease in Australia's greenhouse emissions of 3-4 per cent.

Both Origin Energy and AGL have been pushing government for a rationalisation of coal generation in order to improve the profitability of the assets they own. AGL is one of many players making it clear that a major expansion of renewable capacity hinges on closing down coal generators. Renew Economy reports that:


AGL Energy has again insisted that the development of new large scale wind farms and solar farms in Australia will depend on the government’s ability to manage the closure of old, high emitting coal-fired generators… The deadlock over the closure of coal fired generators, the continuing uncertainty over Federal energy policy, the reluctance of banks to fund new projects, and the standstill in the renewable energy target means that things are going nowhere quickly in the Australian renewable energy market.

In short, coal generators are squeezing out significant expansion of renewable energy, so a renewable energy policy without a coal retirement policy won't guarantee a fall in Victoria's emissions.

As an inducement to Alcoa to establish an aluminium smelter at Portland, the Victorian Government in 1984 offered a large subsidy on electricity prices to run for 30 years, from the opening of the smelter in 1986 till 2016.

This superseded an older agreement that had run since 1962. The discount was up to 50 per cent on prices available to other industrial users. The two smelters at Portland and near Geelong were using up to 25 per cent of Victoria’s power production.

The Geelong refinery has been closed, along with the associated Anglesea power station, and the agreement expires in October 2016. (In 2010 the Brumby government announced the agreement would not be extended past 2016. "The Age" reported on 2 March 2010 that Rob Maclellan, who served as a minister under the Hamer and Kennett Liberal governments, as saying the decision to build the smelter 500 km away from the power station was a mistake and the subsidies given to the smelter should not continue.)

The subsidy was pegged to the world price of aluminium: the weaker the price, the greater the subsidy. The value of the deal is secret, but has been estimated to have cost Victorians $4.5 billion.

Since the privatisation of the State Electricity Commission (SECV) in 1998, the deal has been financed by a land tax levy on the electricity distributors’ property under transmission lines. The Age reported in 2009 that:


Coupled with special levies and taxes on electricity consumers, imposed by the Kennett and Bracks governments to cover the subsidies, the public bill for the contracts by 2016 would be closer to $6 billion.


...a useful starting point for the calculation would be the $100 million a year the government levies on the land under power lines to help pay the state’s liability to the global aluminium giant. Treasurer Michael O’Brien confirmed this in a statement, saying the average subsidy in the past three years was $90 million.

After privatisation, the deal was administered by the corporate shell of the SECV. In October 2013, the Australian Financial Review reported that Victorian State Government accounts for 2012-13 showed:


…the government pocketed $350 million from the SECV as a special dividend. The SECV is a corporate shell that largely administers the state’s electricity contracts with Alcoa. This dividend stemmed from the SECV’s trading activities and was quietly banked against the 2012-13 financial year when the 2013-14 budget was announced in May.

Since the SECV’s only significant role is collecting revenue, and paying, for the Alcoa deal, it seems in some years the profit was banked by the government. At the very least, this is a clear precedent for SECV revenues in excess of costs being passed back into the State budget.