International climate solidarity is more than plane fares and conferences 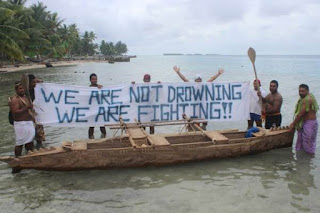 For much of the Australian climate movement, international solidarity has focused on travelling to the UNFCCC Conferences of the Parties (COPs), or financing delegates from indigenous communities and the Asia-Pacific region to participate in global summits.

I want to suggest that there are other practical ways that we can work with our counterparts in the Pacific islands region, without just focusing on the COPs.

With the Paris agreement creating the framework for action for the next decade, there will be increasing focus by Pacific Island Countries (PICs) on implementation, and on forcing OECD countries to meet their pledges. This will see increased pressure on Australia through the Pacific Islands Forum.

The final Paris agreement includes several crucial elements for the Pacific region, including recognition of the aspiration of a long-term temperature goal of 1.5 degrees Celsius above pre-industrial levels, a strengthened mechanism for loss and damage, and the provision for scaled up and simplified access to climate finance for small-island developing states.

There are, however, significant qualifications to all these elements (especially as current voluntary INDC pledges still guarantee temperature increases of 2.7 to 3.4 degrees Celsius!).

1.5 and action on emissions

While “1.5 degrees” will enter popular consciousness as an outcome of Paris (a significant change in the Australian context), Pacific governments have few illusions about the Paris agreement. Most recognise that there is an ongoing challenge to force industrialised nations to address their greenhouse gas emissions.

In Paris, Anote Tong was asked if the Paris agreement would be enough. He replied: “No, I don’t think so. Even with 1.5 degrees, we would still have a problem.”

Post-Paris, Espen Ronnenberg, the key technical climate advisor with the Secretariat of the Pacific Regional Environment Program (SPREP), said: “What is on the table will only get us to 2.7 degrees.”


While this agreement was probably the best we could negotiate among so many countries, we must remain very clear-headed about the fact that our work is just beginning. An agreement is only as good as its implementation, and it will be up to us to make sure that all nations live up to this agreement.

(In February 2016 Fiji became the first country in the world to ratify the Paris agreement).

Australia remains a key part of the problem. During the recent talks in Paris, countries such as Germany, Denmark, Sweden, Britain and the Netherlands all announced plans to cancel emission reduction credits from the Kyoto protocol, which covers the period until 2020. In contrast, Australia is relying on these credits to justify its claims to have achieved Kyoto targets. According to Environment Minister Greg Hunt, Australia’s announcement that it is ratifying the Kyoto 2 protocol “allows us to make use of any additional or surplus outcomes from the first Kyoto period”.

Despite jumping on the “Higher Ambition” bandwagon at the last minute in Paris, Australia's pre-summit target for 2030 (26 to 28 per cent reduction in greenhouse gas emissions below 2005 levels) remains unchanged. Under the new global agreement, countries like Australia and India that have promised emissions reductions by 2030 will be “requested” to do a 2020 review. But speaking in Paris, Prime Minister Turnbull said “the targets that we're committed to for 2030 are there and we're not proposing to review those in two years' time”, when Australia conducts a domestic policy review.

“Loss and Damage” is a core issue for Pacific countries concerned that they can’t adapt to many disasters or slow-onset changes. While Paris agreed on an ongoing Loss and Damage mechanism, the key section of the Paris agreement includes an explicit clause stating that “Article 8 of the Agreement does not involve or provide a basis for any liability or compensation.”

A central pillar of the UNFCCC negotiations has been to guarantee the funds required by developing countries for their transition from fossil-fuel energy systems to renewable energy, and to provide vital resources for adaptation. The global target to assist vulnerable nations, dating from the Copenhagen COP, is US$100 billion of public and private finance each year by 2020. (In a non-binding “decision text”, not the actual Paris agreement, COP21 agreed to review this financing target by 2025. That’s a decade from now!)

For Kiribati President Anote Tong, the key test is to see “how committed wealthy countries are to providing the promised funds.”

Last September, in the lead up to COP 21, the OECD released its progress report on climate financing. The report claimed that developed countries had committed US$64 billion in climate finance in 2014, nearly two-thirds of the way towards the global pledge of US$100 billion by 2020. However this report was sharply critiqued by G77 nations for double counting and misdirection of resources.

For the first year of the Abbot government, Australia abandoned the new Green Climate Fund (GCF). Australia quit its role on the GCF board and refused to contribute funds to the new global mechanism (see “Stopping the cheques”). This folly has now been reversed, and in December 2014 at COP 20 in Lima, Foreign Minister Julie Bishop made a pledge to contribute A$200 million over four years to the GCF.

At COP21 in December 2015, Prime Minister Malcolm Turnbull pledged A$1 billion over the next five years in climate financing, but this includes the funds already pledged in 2014! Before he was moved on from his post in the latest reshuffle, Australia’s Minister for International Development and the Pacific Steven Ciobo confirmed:


The announcement of $1 billion over five years announced by the Prime Minister will be funded from the current aid program budget and includes Australia’s pledge of A$200 million to the Green Climate Fund made in December 2014” (emphasis added).

Under the Abbott government, Australia’s overseas aid fell to 0.26 per cent of gross national income, the lowest level in decades. Last year’s aid budget was cut by nearly a billion dollars, which was an unprecedented 20 per cent reduction in just one year, and meant the abandonment of initiatives across Africa and Asia). So taking all of our public climate funding from the aid budget simply re-badges existing development funds without making any “new and additional” commitments. This also comes at a time, in an election year, when the aid budget is likely to be cut again in the May 2016 Federal budget.

With the GCF now operating from its headquarters in Seoul, Julie Bishop stated in Paris that: “as co-chair of the Green Climate Fund, Australia will ensure vulnerable countries and communities can continue to access support”. However, even as GCF co-chair, Australia can’t guarantee GCF funds will flow for adaptation in the islands. In December, I obtained a statement from then Pacific Minister Steven Ciobo who acknowledged:


While it is not possible to earmark funds in the GCF, Australia clearly outlined its priorities for the GCF as part of our Contributions Arrangement, and requested that our contribution should promote private-sector led economic growth in the Indo-Pacific region (emphasis added).

This is a worrying sign, given that private venture capital will be reluctant to fund the adaptation work that is so crucial in the islands (preferring to invest in “clean coal” technology in China, India and other emerging capitalist economies). Another worrying sign for the Pacific is the September 2015 OECD climate financing report which notes: “Japan and Australia consider that financing for high efficiency coal plants should also be considered as a form of climate finance.”

Addressing the myth that coal will help raise people from poverty

Australia’s role as a major exporter of coal and other fossil fuels creates a structural divide in our relations with neighbouring island states. This gap that will only get wider if the government continues with plans to expand coal exports from Queensland’s Galilee Basin.

In the lead up to COP21, Kiribati President Anote Tong rejected the excuse by Australian politicians that coal is necessary to lift people out of energy poverty:

Before Paris, Tong wrote to world leaders asking them to back a global moratorium on new coal mines and coal mine expansions. The climate movement needs to amplify perspectives like this in the Australian debate, at a time that Indian corporation Adani is struggling to get finance for new mines in the Galilee basin.

There are a number of practical things that Australian climate activists can do, in collaboration with our counterparts in the Pacific: information sharing, joint campaigns, funding, networking etc

1. A preliminary challenge is to change our mindset about the Pacific, to present islanders as actors, not victims. There is simply too much do-gooder propaganda from the Australian climate movement about “saving” the Pacific and how the Pacific is “drowning.” We should bring perspectives from islanders into the Australian debate, this article I wrote for The Guardian in 2014 being just one example: “Young Pacific islanders are not climate change victims – they're fighting”. Beyond this, constant statements about “drowning” islanders ignore basic climate science. By the time the Pacific drowns, so will most coastal and riverine environments in the world. It is important to debate migration policy and climate displacement with a sense of perspective: the fate of 10,000 Tuvaluans will mean little as we face climate displacement on a global scale. Just think about European – and Australian – reactions to the current Syrian refugee crisis.

2. Any climate justice movement must acknowledge that for decades, Pacific governments and communities has been advancing much stronger policies (on targets, loss and damage, and so on) than ever adopted by mainstream Australian climate networks like the Southern Cross Coalition, let alone Australian governments. Australian climate action groups should inform themselves about Pacific perspectives, data and policies. For those who can afford to travel and meet our counterparts in the islands, that’s great. But groups can also invite Pacific delegates to their meetings and summits. Anyone with a computer can download detailed news, reports and data from websites like the Pacific Climate Change Portal.

3. The climate justice network needs to have a strategic debate about how to mobilise groups involved in aid and development, to address the question of Australia’s climate financing. This will involve discussion with aid agencies, churches, the Australian Council for International Development (ACFID) and Pacific diaspora communities. A crucial question, in the current climate of debates about tax reform, GST, negative gearing etc, is how do we raise the issue of climate financing in an election year? By 2020, how can Australia move from an annual contribution of $200 million of public funding to our fair share of the global target: at least $2 billion per annum (a tenfold increase!)

4. We can and should support Pacific civil society groups that are engaged in lobbying their own governments, to hold firm in the face of the inevitable diplomatic and financial pressures that come from OECD nations and the carbon lobby.There are also activist groups like the Pacific Climate Warriors who were involved in the October 2014 blockade of Newcastle coal port. And there is a regional umbrella body of climate groups, the Pacific Islands Climate Action Network (PICAN), which is active in raising awareness and lobbying Pacific governments and regional organisations. Through faith networks, we can support the Pacific Conference of Churches, which is playing a key role in debates on climate displacement (Following the Pope’s Laudato Si Papal Encyclical in May, a group of Pacific climate activists delivered their plea for climate action to Pope Francis during the Papal Audience in Rome).


This article is based on a presentation to a meeting of Climate Action Moreland.