The why and how of radical emissions reductions (2): Corinne Le Quere

Second in a series | Part 1

Le Quere framed "radical emission reductions" as reductions consistent with a two-in-three chance of keeping global warming to less than 2 degrees Celsius (°C), saying that there is no surety that 2°C is a safe threshold, but according to the geological record, there have been periods of up to 2°C warming during the past 800,000 years that did not trigger any "nasty or unexpected" feedbacks, though sea-levels were 5–10 metres higher than today.

[Note by CCR: Readers of this blog will know well that with less than 1°C of warming so far, there is a good deal of evidence that climate change is already dangerous ,and of the view of leading scientists that 2°C hotter is not an acceptable climate target but a disaster.  In addition, the record is not clear that the warming reached 2°C, with the chart (below), for example, showing sea-surface temperatures in the West Equatorial Warm Pool reached no more than 1.5°C over pre-industrial, around 400,000 years ago.]

Le Quere told the conference there were no analogues for 4-to-5°C warming in geological record, though there have been coolings of that magnitude, during the last glaciation 20,000 years ago, when environments were transformed. The UK, for example, was covered by ice a mile thick, which may gives an idea of the change that may occur in a world of 9 billion people.

Thresholds and effects in climate system, such as methane from permafrost and sediments, and Amazon dieback, are poorly known and we don't really know at what level of warming these occur.

Warming that has occurred is committed for up to 1000 years. Le Quere said if emissions cease now we get no further warming. Future warming is from future emissions, and near-term emissions cuts decrease the rate of warming immediately.

[Note by CCR: It is true that if just the present level of atmospheric carbon dioxide is maintained, warming would not exceed 1.4C. However there are other warming gases such as nitrous oxide which have a lifetime of a century and, as well, warming is at present being temporarily reduced by the large amounts of cooling sulphates produced by burning fossil fuels that would cease if emissions were zeroed. See Faustian bargain revisited: study finds zeroed emissions will add 0.25-0.5C of warming as aerosol cooling is lost. ]

Le Quere said that since 1880, global warming has been 0.85C, with warming in the past 15 years slower than 15 years prior. The factors are listed here: 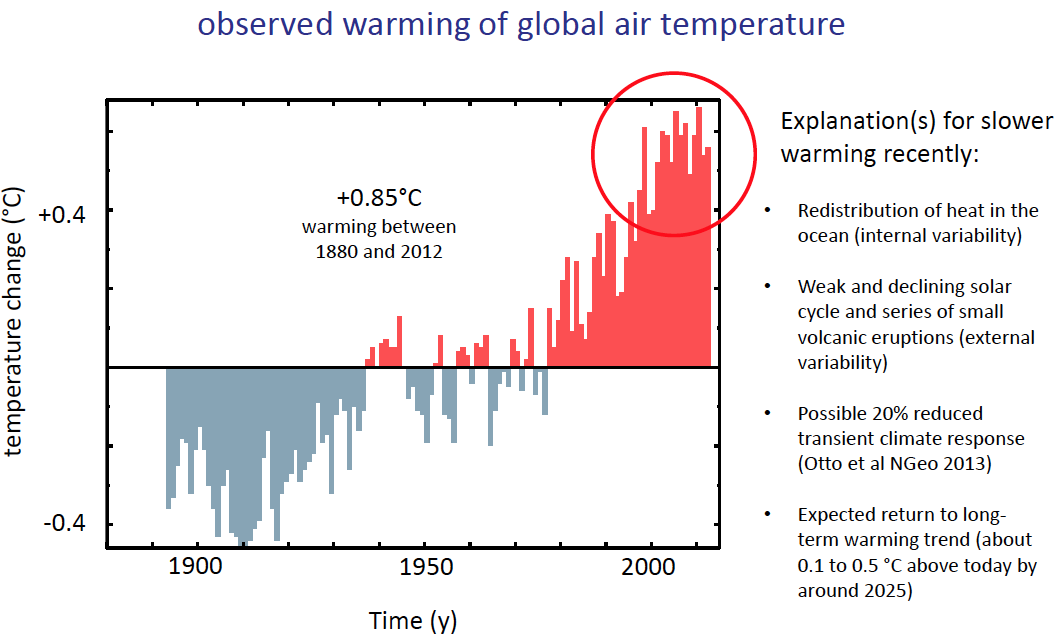 However there is an expectation of return to the longer-term warming trend, with additional warming of 0.1–0.5°C by 2025 compared to today.

Looking at emissions so far, against four IPCC scenarios, we are now following the highest and most carbon-intensive scenario (RCP8.5) which leads to 3.2–5.4°C of warming.

Our emissions could change rapidly because there are tipping points in society, such as reaction to extreme events, and the likelihood they will recur and increase in severity. The people who are directly affected and pay during these extreme events will do their own sums and determine what it means for their own budgets not to mitigate climate change.

There have been many such large-scale events, including the 2005 European heatwave, the 2010 crop failure in Russia, the 2012 crop failure in the USA, the Australian 2013 heatwave, and Hurricane Sandy. Although Sandy itself cannot be attributed to climate change, 20 cm of the 1metre storm surge that invaded the subway of New York is directly attributed to climate change. This was the most expensive damage caused by the hurricane, which cost $60 billion in damage in total.

Academic community must be ready to step in to offer solutions and examples at time when mentality changes, as a result of realisations of the costs caused by damage from continuing emissions.

So the purposes of the Radical Emissions Conference:

1. Explore answers to some important questions, including:
2. Identify key triggers, barriers and/or opportunities, and develop an agenda to progress beyond the Conference.

3. Generate momentum for radical change thinking, and share ideas and experience between academics and practitioners.


Thanks to Shane White for transcribing the presentations.