Prof. Kevin Anderson and Dr. Alice Bows-Larkin, both from the Tyndall Centre, were instrumental in in framing the challenge for the conference. In 2010, they noted in a research paper that:

And in 2012 in “A new paradigm for climate change”, Anderson and Bows call for academic rigour in elaborating the scientific and economic choices:


… academics may again have contributed to a misguided belief that commitments to avoid warming of 2°C can still be realized with incremental adjustments to economic incentives… as the remaining cumulative budget is consumed, so any contextual interpretation of the science demonstrates that the threshold of 2°C is no longer viable, at least within orthodox political and economic constraints…
At the same time as climate change analyses are being subverted to reconcile them with the orthodoxy of economic growth, neoclassical economics has evidently failed to keep even its own house in order. This failure is not peripheral. It is prolonged, deep-rooted and disregards national boundaries, raising profound issues about the structures, values and framing of contemporary society… This catastrophic and ongoing failure of market economics and the laissez-faire rhetoric accompanying it (unfettered choice, deregulation and so on) could provide an opportunity to think differently about climate change…
It is in this rapidly evolving context that the science underpinning climate change is being conducted and its findings communicated. This is an opportunity that should and must be grasped. Liberate the science from the economics, finance and astrology, stand by the conclusions however uncomfortable. But this is still not enough. In an increasingly interconnected world where the whole — the system — is often far removed from the sum of its parts, we need to be less afraid of making academic judgements. Not unsubstantiated opinions and prejudice, but applying a mix of academic rigour, courage and humility to bring new and interdisciplinary insights into the emerging era. Leave the market economists to fight among themselves over the right price of carbon — let them relive their groundhog day if they wish. The world is moving on and we need to have the audacity to think differently and conceive of alternative futures.

Their writings which underpin the conference's rationale, include: A new paradigm for climate change, Beyond ‘dangerous’ climate change: emission scenarios for a new world, and Reframing the climate change challenge in light of post-2000 emission trends. More recently, Anderson's Avoiding dangerous climate change demands de-growth strategies from wealthier nations more explicitly lays out some of the key assumptions.

So to the conference itself, and many thanks to Shane White for wading through the conference videos and taking extensive notes which form the basis of these blogs.

Anderson's presentation was entitled "'Avoiding dangerous climate change’: Why we need radical reductions in emissions", and it kicked off the conference. The video is here plus slides.

Anderson starts with the proposition that stabilisation at 2°C remains a feasible goal of the international community, just. [Readers of this blog will know well that at less than 1 degree of warming, there is a good deal of evidence that climate change is already dangerous and of the view of leading scientists that 2°C hotter is not an acceptable climate target but a disaster.]

Anderson makes the point that radical mitigation has economic benefits, not financial. He says it is time to wrestle economics away form the financiers. The word economics originates from the Greek oikonimia, meaning stewardship of the household; no mention of money. The word financial comes from the Greek chrematistic meaning the making of money. If making money is our priority then 2°C is not viable. If we’re interested in the wellbeing of our lives and the planet, then 2°C is viable with a successful economy.

The science message contained within latest IPCC report hasn’t changed in the last 20 years. This science is mature. But what has changed, says Anderson, is that:
The world says it is still committed to make a fair contribution “To hold the increase in global temperature below 2°C, and take action to meet this objective consistent with science and on the basis of equity”. (Copenhagen Accord 2009). 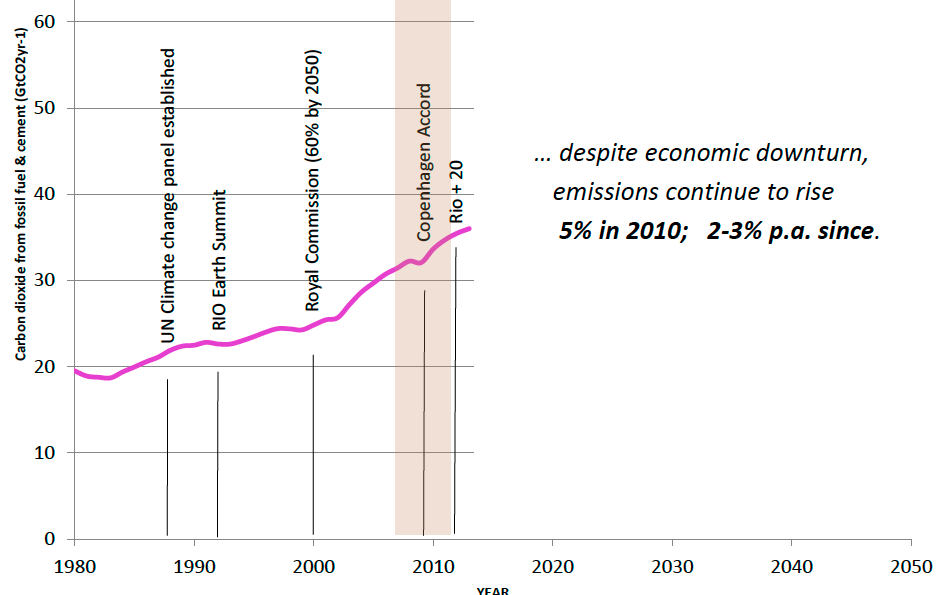 So why do we need to concentrate on energy demand rather than supply? Because, says Anderson,  in 2013 it’s too late to only rely solely on the supply side. We need to focus on the demand side now too.

So what of future emissions? Everything built today based on fossil fuels is locking ourselves into a high carbon future: power stations, large scale infrastructures, built environment, aircraft and ships. All this infrastructure will be in place for 30 to 100 years. 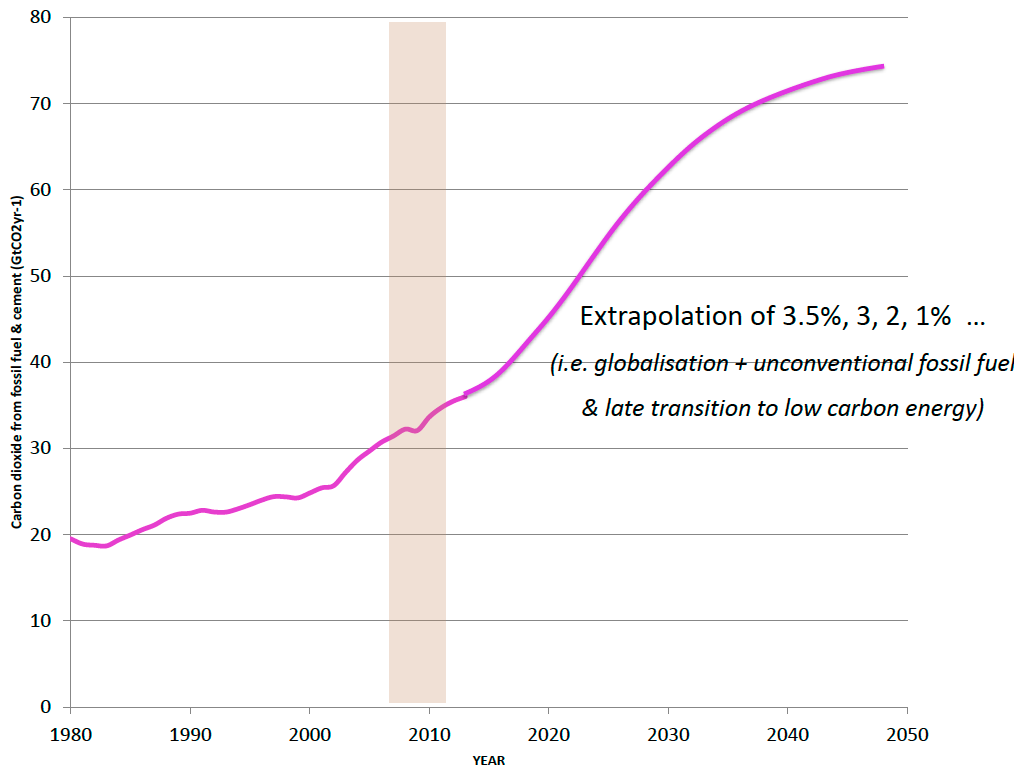 Emissions in the above chart are higher than emissions in IPCC’s highest emission pathway (RCP8.5), with 2% a year growth from 2020.  Are such rising emissions scenarios realistic? They are certainly viable, says Anderson,  since UK is considered a leading country on climate change and the UK has made extensive fossil fuel investments. 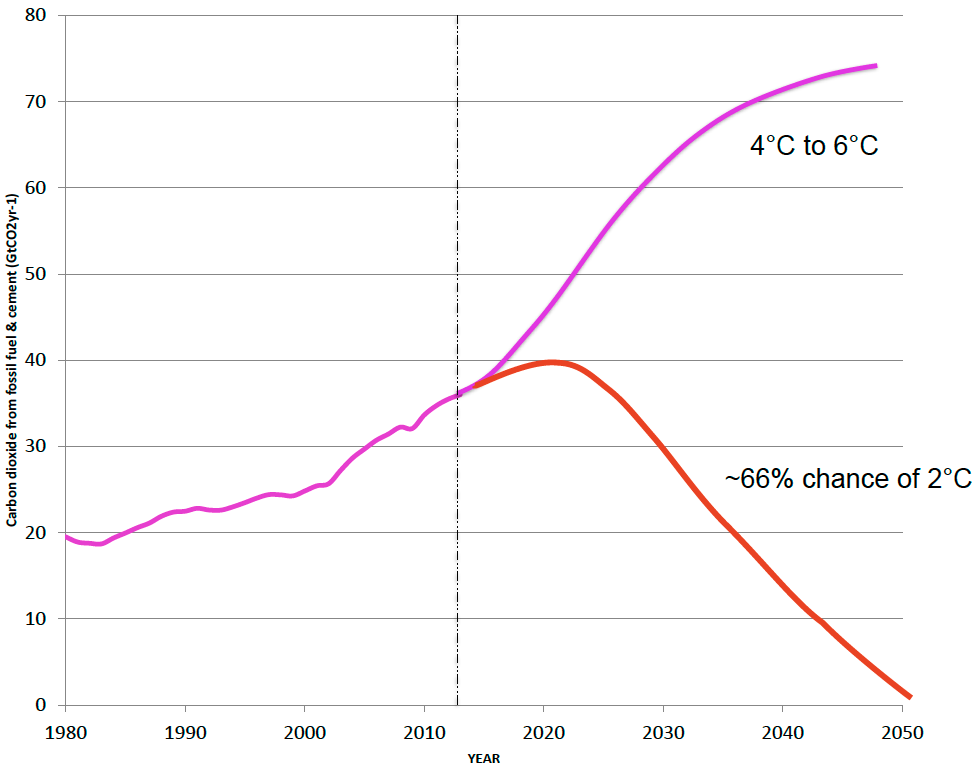 The carbon dioxide trend, says Anderson,  is “perfectly in line with a temperature increase of 6°C, which would have devastating consequences for the planet” as IEA chief economist Faith Birol has noted. Whether it is 4, 5 or 6°C doesn’t mean too much; they’re all devastating.

There is nothing we can do significantly in the wealthy parts of the world to get emissions down with just low carbon supply in the short term. The only thing we can do now is reduce our demand. The supply side is a pre-requisite in the long term to holding temperature below 2°C. 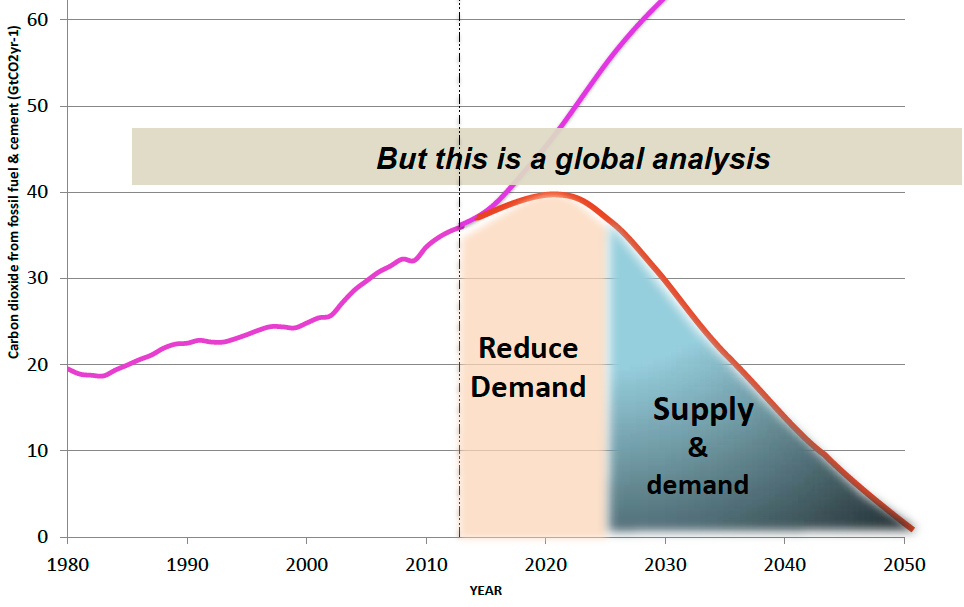 This analysis is global. But premised on the basis of equity, poor countries shouldn’t be forced to suffer by reducing their emissions demand by the same rate as us in the short term.

So let’s assume non-Annex 1 nations (developing nations) collectively peak their emissions by 2025 (which a a big ask) and reduce emissions thereafter by 6 to 8% per year. Then what emissions budget is left for the rich, developed Annex 1 nations? The answer is that Annex 1 nations require at least a 10% reduction in emissions year on year (this is based on analysis a few years old so 10% is a bit low now). That means a 40% reduction by 2018 (c.f 1990), 70% reduction by 2024, and 90% by 2030 (remembering that these these are radical emission reductions but provide a 66% chance of less than 2°C.

Radical emission reductions on the basis of equity are viable by:
So in summary, a radical plan looks something like this:
Anderson concluded by quoting Robert Unger that“at every level the greatest obstacle to transforming the world is that we lack the clarity and imagination to conceive that it could be different.” He said the paradigm he had outlined will be dismissed as not being practical, but 4, 5 or 6°C is impractical and certainly not equitable.