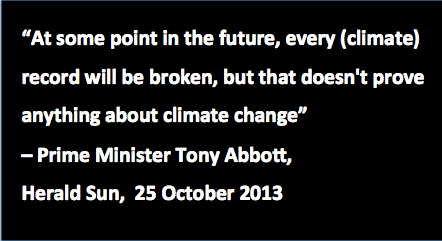 The Abbot Point media announcement had the gall to claim the Government will protect the Great Barrier Reef through dredging restrictions; never mind that global warming is killing coral reefs, as well as endangering humans. The approval process ignored the climate-change implications, under the lame excuse that emissions from burning the coal are not relevant because they will occur overseas. But denying responsibility for those emissions is like believing we won’t be harmed by cigarettes we sell to a chain-smoker in our own lounge-room.

The government also released an energy issues paper which promoted the interests of the fossil-fuel-fired power generators and reinforced the myth that renewable energy cannot provide 100% of Australia’s energy needs. The paper says network costs, the major contributor to electricity prices, will continue to rise, revealing the Government’s hypocrisy in complaining about the relatively small price impacts of climate policies. The rational and cost-efficient options of investing in energy efficiency and renewables – where prices are falling rapidly as technologies and scale improve – were given short shift.

In its budget update, the government cut funding to the national network of Environmental Defenders Offices (which provide expert legal advice on environmental issues and are disliked by the mining sector) and the Energy Efficiencies Opportunities Program (which raises public income, but is opposed by generators because reducing energy demand lowers profits).

Prime Minister Abbott indicated the Renewable Energy Target (RET) may be scrapped or weakened, claiming it causes “pretty significant price pressures”. In fact the RET and the "merit effect" of renewable energy have reduced wholesale electricity prices, and the major factor in rising retail electricity prices is over-investment in poles and wires. The Abbott government’s real concern is that the RET reduces profits for coal-fired generators. It is expected to be reviewed by the anti-renewables Productivity Commission.

The government is also pushing an environmental deregulation agenda. They have refused to reveal the details of free trade agreements under negotiation (the Trans-Pacific Partnership and Korea-Australia FTA) which would allow multinational corporations to sue governments for policies that threaten their profits, including climate policies. At COAG, the federal government has delegated environment impact assessment powers to State governments, all of whom are notoriously pro-development, and legislation will prevent Australians from legally challenging environmental approvals granted before 2014. Tim Wilson from the denialist Institute of Public Affairs has been appointed “freedom commissioner”, and the government has announced an inquiry into supposed infringement of corporate rights by environmental regulations. Destroying the environment we depend on apparently isn’t an infringement of our freedom.

The government's Emissions Reduction Fund Green Paper is in essentially the ineffective voluntary climate policy they took to the 2013 election. An Expert Reference Group to advise on the Fund’s design is largely comprised of corporate lobbyists who oppose strong climate action. And, of course, the Abbott government continues to push legislation to repeal the carbon price, the Clean Energy Finance Corporation, and the Climate Change Authority.

This government is only four months old, and already its level of secrecy, deception, misdirection, and irresponsibility on climate policy is staggering. Tony Abbott says "happy is the country which is more interested in sport than in politics.” But the game our future depends on is being playing out in Canberra, as far from a public audience as Tony Abbott can get.

A longer version of this post is available at Precarious Climate.