NASA climate chief James Hansen has three great attributes: his research is impeccable and pertinent, he is politically courageous, and he communicates with great clarity to lay audiences.
Reading his presentation on 5 September — when he stepped in the deniers’ lion’s den at a meeting organised by the climate-denialist lobbyist Grover Norquist to rebut arguments previously presented by Pat Michaels — all three features of Hansen’s work were on display.
Hansen shows how Michaels uses the denials’ favourite method – cherry-picking data over a particular range – to prove that black is white.
Last week in Deniers cherry-pick in vain effort to prove up is down, we looked at how that technique had been used to falsely claim that “Global warming stopped 16 years ago”.
In his 5 September presentation, Hansen focuses on the assertion that sea-level rises have slowed/stopped. The real issue here, as with short-term temperature movements, is the influence of the El Nino–La Nina cycle. During the La Nina phase, there is more atmospheric water vapour, there is more precipitation and hence more water stored on land. All of which means that there is a bit less water stored in the oceans. So during a strong La Nina, sea levels will temporarily flatten or drop a little, and then rise strongly with the advent of the next El Nino phase.
But behind all this short-term fluctuation, the longer-term trend is rising sea levels.  This can be seen clearly in this first chart, from Jim Hansen. The bottom half shows the ENSO index, with El Nino phases in orange and La Nina phases in blue. From 2010 to early 2012, we can see a strong La Nina which brought some record heavy downpours to Australia. 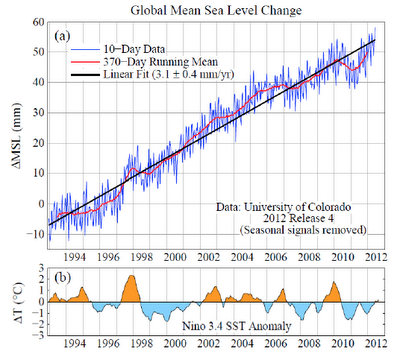 In the top part of the chart, actual data (in blue) is smoothed to a 1-year running curve (red) which shows a drop in sea levels in 2010 associated with the strong La Nina, and then rising strongly to be above the long-time linear fit (black line) by mid-2012 as the La Nina ended and conditions returned to neutral.
Hansen notes that this latest data was available to Michaels when he gave his presentation, but he chose not to include it for the obvious reason that it contradicted his denialist, cherry-picking  interpretation. Hansen concludes:

Hansen also presented a chart on the longer-term sea-level-rise data, showing that:


The average in the 20th century rise was about 2 mm/year. In the last two decades the average rate of rise has been 3.1 mm/year. The recent rate of sea level rise corresponds to 3.1 meters per millennium, which is at least an order of magnitude faster than sea level rise during the past 5000 years of the Holocene, when sea level rose by only 1-2 m. 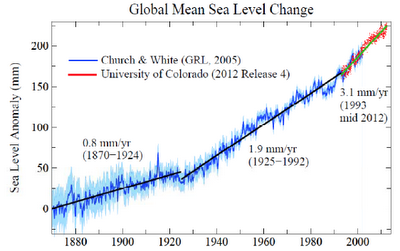 The sea-level rise discussion concludes with a reiteration of observations and predictions that Hansen has been making for many years:
In the remainder of his presentation, Hansen present evidence on surface temperatures, the performance of climate models, and key issues for today. The whole presentation is only 9 pages, and it’s well worth the read.