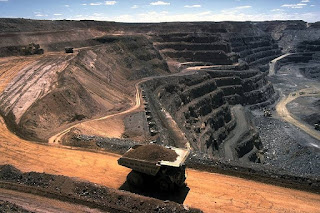 But leaving that aside, how true is it? Would slowing or halting Australia’s coal exports really deprive Australians? What would it mean for Australian jobs?
Research by The Australia Institute suggests that slowing down the pace of coal exports would actually result in enormous benefits to the Australian economy. It would allow our other key export industries – including manufacturing, tourism, education and agriculture – to expand, employing more people and paying more tax.
Because these industries are all far more labour intensive than mining, less subsidised and mostly better taxpayers than mining, it would lead to more jobs and increasing state and federal revenue in the long run.
It’s no accident that the unprecedented expansion of mining in Australia has been accompanied by a sharp decline in many of our most important long-term export industries.
The relentless stream of manufacturing job losses, decline in tourist arrivals and overseas students, and declining agricultural exports are the collateral damage of allowing a breakneck mining expansion without regard to its impact on the rest of the economy.
The problem is that the more mining you have, the less you have of everything else.
For two decades from the early 1980s, exports from Australia’s non-mining industries were steadily increasing as a percentage of our GDP. This was a sign of an increasingly healthy diversified economy, better able to pay its way in the world. Then in the early 2000s, with the onset of the mining boom, something changed, and these industries have been heading south ever since.


The reason is that mining “crowds out” other exporting industries, which flows onto the rest of the economy, creating what we call the “two-speed economy”.
It has done this primarily through driving up the exchange rate, and creating an acute skills shortage.
The unprecedented rise in the Australian dollar is primarily driven by increasing commodity prices, and the massive $260 billion influx of foreign capital to fund the construction of mines and gas fields.
A further cause is that Australia has high interest rates relative to other developed countries, which means it attracts more overseas investment and further drives up the dollar. The Reserve Bank has cited the mining boom as a reason for every interest rate rise since 2005.
This has had a devastating impact on our non-mining exporters. Manufacturers who were receiving $100 for a product sold into the American market a few years ago now receive less than $70 for the equivalent item. The dollar has also appreciated by a similar amount relative to most of our other markets. Hotel rooms, meals and tours and university courses are similarly more expensive for those thinking of visiting Australia.
Australian tourism visitors have dropped by around 250,000 over the last decade, as more Australians holiday overseas, and overseas tourists go elsewhere. This is during a 20% boom in global tourism over the last decade.
Since the beginning of the mining boom, Australia’s rural sector has lost $43.5 billion in export income. This includes $14.9 billion in 2010-11 alone. These losses have occurred because the mining boom has forced the Australian dollar to historic highs. The beef industry took a $2 billion dollar hit last year alone.
Manufacturing job losses are announced with depressing regularity, with well over 120,000 manufacturing jobs disappearing since the GFC.
Adding fuel to the fire, the mining boom has created an acute skills shortage. This is simple supply and demand. If you plan to build $260 billion dollars’ worth of mining projects at once, it will create enormous demand for a narrow set of skills that are also important to other industries. This makes it much harder for other businesses to recruit and retain employees.
These businesses will also have to compete with the inflated wages being offered by the miners. The economic consultants for Clive Palmer’s China First mine acknowledged this impact alone would cost around 3000 jobs in manufacturing and tourism, and that’s just one mine!
Hooke’s concern about Australian jobs is especially interesting when you consider that the coal mining industry is highly capital intensive, and a very small employer. It employs around 38,000 people nationally, less than a third of one percent of the workforce, compared to around one million in manufacturing, half a million in tourism and 327,000 in agriculture.
With a capital-intensive industry crowding out labour-intensive industries, it seems likely that the net effect of the expansion of the coal industry will be job losses for Australia as a whole.

Crowding out of these industries also means a loss of tax that these industries would have been paying. The mining industry pays an effective corporate tax rate of around 13.9%, compared to the industry average of 21%.
To take the latest year available, 2009-10, mining companies paid $6.8 billion in company tax, amounting to just 2.2% of government receipts.
The coal industry also pays around $4 billion dollars a year in royalties to the states. Although royalties are technically considered taxes, the minerals are the raw materials of mining in the same way that wheat is for a baker, or bricks to a builder. Bakers and builders pay market prices for their raw materials, and the costs are not considered as a tax.
The difference is that the Australian people own those minerals, and the state government sells the minerals to mining companies on our behalf. It is hard to imagine that if the minerals were owned by a private company, like bricks or wheat, they would be sold for around 7% of their market value. This special treatment of the mining industry could be seen as a huge subsidy in itself.
As it stands mining is highly subsidised, to the tune of at least $5 billion dollars a year, which makes subsidies to manufacturing look modest.
Mitch Hooke’s claim that “the proposal to stop Australian coal exports won’t stop global coal use” is true, as far as it goes. But no one would seriously suggest that it would. Other countries will continue to export coal.
What it will do is drive up the coal price considerably, because Australia is the world’s largest coal exporter. In fact, Australia has a larger share of the world’s coal exports than Saudi Arabia does of oil, and no one would doubt the effect on global oil prices of Saudi Arabia reducing its oil exports.
This will have the effect of our customer countries – primarily Japan, Taiwan and India – reconsidering investing in coal for their energy infrastructure.
Luckily they already are. India has had to scrap huge coal power plants due to coal price fluctuations and difficulties in securing enough coal that have led to massive blackouts. This has led to rapid ramping up of solar targets to 10GW by 2017.
This shift to renewable energy is gaining pace around the globe with renewable energy investment exceeding fossil fuel in 2011. This is an unstoppable trend, and is great for the developing nations who will be able to avoid dependence on volatile and ever increasing fossil fuel prices, and the myriad of health and pollution problems associated with burning coal.


This article was co-authored by Mark Ogge. Mark is the Public Engagement Officer at Canberra-based think tank, The Australia Institute. His work involves communication of key research findings about the impacts of the mining industry on other crucial sectors of the Australian economy, especially manufacturing, tourism, education and agriculture.
Richard Denniss is Executive Director of the Australia Institute. The Australia Institute is funded by memberships and donations from philanthropic trusts and individuals to our Research Fund. Where particular pieces of research are commissioned, this information is disclosed as part of the research.