This is one of those moments when the pace of climate change and its consequences become simply extraordinary.
In the last two weeks, I’ve spent some time trying to unravel the Arctic’s big melt of 2012 and what is means for future global warming and the world we will live in.
It’s not territory for the faint-heartened, and one of the world’s foremost Arctic experts has stepped up to make a big call, a really big call.
The Scotsman of 29 August, under the title “Arctic sea ice will vanish within three years, says expert”, reports:


Peter Wadhams, professor of ocean physics at Cambridge University, who was branded “alarmist” after he first detected “substantial thinning” of sea ice in 1990, said: “The entire ice cover is now on the point of collapse."
“The extra open water already created by the retreating ice allows bigger waves to be generated by storms, which are sweeping away the surviving ice. It is truly the case that it will be all gone by 2015. The consequences are enormous and represent a huge boost to global warming.”
He said that while reducing carbon emissions was the only solution, geo-engineering techniques – including one proposed by a Scottish professor – should be “urgently” explored.”

This is in sharp contradiction to the projections of many generalised climate models (GCMs) which do not have a great track record in projecting ice-mass loss. As an example, the IPCC 2007 report noted that: “in some projections, Arctic late-summer sea ice disappears almost entirely by the latter part of the 21st century.”
But Wadhams is basing his prediction in part on a new range of more specialised regional climate models, and in particular a model (acronym NAME) developed by Dr Wieslaw Maslowski and colleagues.  Maslowski is highly regarded, in part because his position at the American Naval Postgraduate School has given him unique access to half a century of Arctic sea-ice thickness scans from sub-polar US military submarines.
Maslowski told BBC News last year:


In the past... we were just extrapolating into the future assuming that trends might persist as we've seen in recent times. Now we're trying to be more systematic, and we've developed a regional Arctic climate model that's very similar to the global climate models participating in IPCC assessments. We can run a fully coupled model for the past and present and see what our model will predict for the future in terms of the sea ice and the Arctic climate.

Maslowski’s recent, peer-reviewed work (Maslowski W.,Clement Kinney J., Higgins M., Roberts A. (2012) "The Future of Arctic Sea Ice", The Annual Review of Earth and Planetary Sciences, 40: 625-654) emphasizes "the need for detailed analyses of changes in sea ice thickness and volume to determine the actual rate of melt of Arctic sea ice".  It finds that:


The modeled evolution of Arctic sea ice volume appears to be much stronger correlated with changes in ice thickness than with ice extent as it shows a similar negative trend beginning around the mid-1990s. When considering this part of the sea ice–volume time series, one can estimate a negative trend of −1,120 km3 year−1 with a standard deviation of +/-2,353 km3 year−1 from combined model and observational estimates for October–November 1996–2007. Given the estimated trend and the volume estimate for October–November of 2007 at less than 9,000 km3, one can project that at this rate it would take only 9 more years or until 2016 +/-3 years to reach a nearly ice-free Arctic Ocean in summer. Regardless of high uncertainty associated with such an estimate, it does provide a lower bound of the time range for projections of seasonal sea ice cover.”

Here is Figure 9 from the paper by Masowski et al. The full paper is available here (top item). 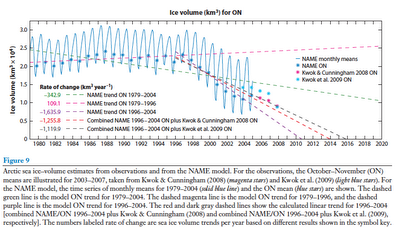 Last November Prof. Wadhams, a world-leading authority on the polar regions who has just returned from a field trip to the Arctic, told the UK Telegraph that Maslowski’s calculations had him "pretty much persuaded." Prof Wadhams said: "His [model] is the most extreme but he is also the best modeller around... It is really showing the fall-off in ice volume is so fast that it is going to bring us to zero very quickly. 2015 is a very serious prediction and I think I am pretty much persuaded that that's when it will happen."
So his big call is not new, but it should be a call to arms. Perhaps Wadhams is out by a year of two, but not by any large amount. As an interested, amateur observer who has followed and avidly read the Arctic literature over the last five years, it rings true. Three-quarters of the summer sea ice by volume has gone in 30 years, and the rate is increasing, as the following chart shows.
The Arctic sea-ice has long passed its tipping point, and so also have the other critical features in the polar north. We will soon have a very different, warmer Arctic climate with mind-boggling implications for the rate of Greenland melt, sea levels, the stability of permafrost and methane clathrates, and more extreme weather in the northern hemisphere.
Welcome to the Arctic end times.