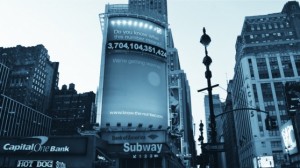 Over the last few months I’ve had the privilege of listening to a range of leading climate change policy advocates in Australia, the US, Canada and Europe reflect on priority actions for reducing the risk of runaway climate change.
This has included interviews with many of the lead authors of the strategies reviewed in the Post Carbon Pathways report. In this Post Carbon Postcard #2, written from New York City, I’d like to highlight a few of their responses to two of the most common questions in the minds of people who have been working on climate change and environmental issues for many years: Is it too late? And...So what should we do now?

There are, of course, important differences in perspectives, reflecting significant differences in political and cultural contexts. In the United States, as in Australia, much of the debate is still focused on winning the argument that urgent action to reduce carbon emissions and prevent runaway climate change is in fact necessary. Importantly for an Australian audience, in the US there are signs of a shift back in public attitudes towards increased acceptance of the climate science evidence. This shift has no doubt been influenced by the extent to which many US citizens are joining the dots between the alarming increase in extreme weather events and the likelihood that climate change is ‘loading the dice’ towards longer droughts, more frequent floods and more destructive storms.
In Europe the climate science debate is generally over with most of the population – and most mainstream political leaders and parties – largely convinced by the evidence that rising greenhouse gas emissions are warming the atmosphere and driving potentially catastrophic climate change. The debate in Europe is far more focused on the fastest and fairest strategies for accelerating the transition to a post carbon economy.
The common themes from these interviews and conversations are, however, largely consistent with the key messages highlighted in the initial Post Carbon Pathways report, which include the following.
I’d like to highlight a few additional reflections from the climate change policy-makers and advocates I’ve been listening to on two of the most common questions in the minds of people who have been working on climate change and environmental issues for many years:
As Bill McKibben noted in his recent speech to the New EconomicsInstitute conference at Bard College New York, the continuing rise in greenhouse gas concentrations, the rapid melting of the Arctic ice pack and the escalating frequency of extreme weather events all provide compelling evidence that it is indeed too late to prevent global warming from having significant long term consequences for human beings and other species.
But, McKibben argued passionately, that does not mean that it is time to give up. It means it’s time to sharpen our focus and redouble our efforts to reduce carbon emissions to zero as fast as possible. ‘The central problem’, he argued, ‘is the incredible grip of the fossil fuel industry on the reins of power around the world. Their business model is the problem. It’s either wreck their business model or wreck the planet.’
Lester Brown, CEO of the Earth Policy Institute and author of World on the Edge responds to the ‘too late’ question in the following way:


When we use the term “Is it too late,” we have to say, “Is it too late for what?” ...The question is can we get carbon emissions coming down soon enough to avert the worst consequences of climate change? We’re not going to avert all of them. We’re already experiencing them. I guess the question is, can we keep climate change from spiralling out of control? I don’t know the answer to that question but we certainly have to try.

Brown’s analysis is reminiscent of similar reflections from Australian author and activist, Paul Gilding, author of The Great Disruption:


The most consistent emails I get are from people who say, “Like your work. I'm glad you're optimistic. I'm not. We're screwed. We're stupid and we're done and we'll fall over.”... You get to the point of saying, “Well, if you genuinely believe there's a 100 per cent chance that we're fried and society is going to collapse, then there's nothing for me to discuss with you...If you believe that, you’re going to go and grow vegetables in the middle of nowhere. Your choice. But it's not an actionable kind of analysis.”’
Then I say to them, “And by the way, the reason you're wrong is you can't be sure. You can't be a 100 per cent sure that that is going to happen.” Then you argue, “OK, given that there is some potential, which actually I think is very high...even if you think there's a 10 per cent chance that we can avoid catastrophic collapse and go somewhere else, then why wouldn't you do that?”

Reflections on the gap between climate science and ‘realpolitik’ have been brought into even sharper focus by the disappointing outcomes from the United Nations’ Rio+20 conference. As Professor John Schellnhuber of the Potsdam Institute for Climate Impact Research notes, Rio+20 provides further confirmation that the international community currently appears incapable of promoting the urgently needed transformation towards a sustainable society with the requisite speed and commitment.


We might well be moving towards the end of such mammoth meetings as these. Although they make a lot of noise, the very fact that so many problems are covered means that no single problem is tackled resolutely. The future of humanity is too precious to be left to this ongoing game of nation-state Mikado.
What we now need are pioneers from all spheres of the world community... What are now becoming increasingly important are alliances between pioneering countries, alliances between cities, engagement from citizens, companies and scientists, a trailblazing spirit from pioneers of change, and examples of successful projects that promote change towards sustainability. (media release)

The climate change political priority for Bill McKibben and 350.org is also sharp and clear. End the massive subsidies being paid to the fossil fuel industry. ‘No other industry’, he argues, is allowed to dump its garbage in the streets. Why should it not only be allowed, but subsidized, for the industry that is responsible for the most dangerous product of all, the CO2 that could totally destabilize our planet?’
McKibben also highlights the resurgence across the US of local, community-based enterprises, financial institutions, food and energy systems. Importantly, he noted this is the first year since World War II that there are more – not less – new farms in America. Many of these new farms and food projects are small holdings, focused on supplying local markets – and many are located in cities as well as in rural communities.
The reference to the importance of action at sub-national, local and city levels also provides a useful reminder that one of the more positive announcements from Rio+20 was the commitment by the Mayors of the C40 Cities Climate Leadership Group to reduce greenhouse gas emissions by 248 million tonnes a year by 2020. This could provide a platform from GHG reductions of more than one billion tonnes by 2030. Not sufficient of course – but certainly heading in a better direction than many nation states.
For Lester Brown...


‘The question I get most often as I travel around the world is, people ask me, “What can I do, what can I do?” and I think they expect me to say, “Recycle your newspapers, change your light bulbs”, and so on. Those lifestyle changes are important but we now have to change the system and that means becoming politically active, not for one party or another but to support the Beyond Coal campaign, for example. Be prepared to write letters to your Congressman to lobby, to demonstrate, in front of a coal- fired power plant if necessary or in front of a utilities office.
My bottom line feeling is things are going to change much faster than we realise and I think that change is probably more evident here in the United States right now where carbon emissions are dropping very fast as coal-fired power plants are closed and as gasoline use drops.’

For Professor Mark Jacobson, co-author of A Plan to Power 100 per centof the Planet with Renewables...


‘One priority would be eliminating subsidies to fossil fuels and shifting some of those subsidies to renewables, clean energy, technologies...You really need to take away the subsidies of the fossil fuels, that’s the key part, because that’s what keeps them in business. We can add new energy infrastructure that’s clean, but that doesn’t get rid of the old stuff. The old stuff still relies on subsidies. The only way to get rid of them is through passing a law to make them go out of business.
Another thing you could do is through tougher emission control regulations, which California is doing in terms of vehicles and particularly power plants. Definitely in vehicles they’re gradually ramping down, making it so it will be almost impossible within a few years for a combustion vehicle to meet the standards. So that only electric cars will be able to meet those standards.
The other is on the positive side to increase [renewable energy] transmissions...it really requires an organised plan of where you want to put the [transmission] lines. First, an organised plan of where you want to put the solar, the wind and the geothermal, and then plan the transmissions. So everything is organised ahead of time and that would make it more efficient as opposed to piecemeal, adding things here and there.’

Across all of these conversations I have constantly been struck by the extent to which the World in Transition report of the German Advisory Council on Social Change provides a particularly valuable, integrated overview of the policy, research and advocacy priorities needed to drive the transition to a post carbon economy at the required speed and scale.
Among many valuable insights the report identifies the following factors as crucial drivers of large scale social and economic transformations.
The aim of the Post Carbon Pathways project continues to be to contribute to the constantly evolving Australian and international conversation about the most just and effective responses to the rapidly escalating risks and challenges of climate change.
We therefore hope that these interviews and links can provide useful food for thought as we enter a new era in which strategic and co- operative action by communities, businesses, cities, nations and regions will increasingly be a key focus of the actions needed to drive a swift transition to a just and resilient post carbon economic future. ﻿