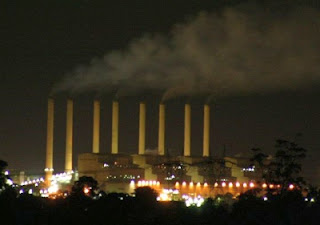 Under its Clean Energy Future, the Federal government will negotiate to close 2000 MW of the dirtiest fossil fuel power generating capacity in Australia by 2020.
With the price on carbon now in operation, there will be pressure on some highly carbon intensive station to remain viable – this policy pre-empts the failure of the most vulnerable businesses and provides some certainty as to which stations will close, as well as compensating the companies affected, including the workers who will lose their jobs.
The plants under consideration are Hazelwood, Yallourn and Energy Brix in Victoria, Playford B in South Australia and Collinsville in Queensland.

The most likely combination of these stations is Hazelwood and the much smaller Energy Brix which both rely on the same open cut coal mine in the La Trobe Valley. So assuming these are the stations that close, what will be the impact on Victoria and Australia’s carbon emissions and electrical energy system?
Hazelwood power station is a 1600 MW brown coal generator made up of eight 200 MW units which were constructed between 1964 and 1971. It is the oldest coal-fired generator currently operating in Victoria, and not surprisingly has the highest carbon intensity of any power station in Australia at 1.52 tonnes of CO2 for each mega-watt hour* (MWh) of electricity produced (as reported by the Australian Energy Market Operator.
It is just ahead of Playford B in South Australia, but Playford only has a capacity of 240 MW. Loy Yang B produces more carbon (20 mega tonnes versus 18 for Hazelwood), but also produces almost 40% more electricity. Hazelwood is a clearly a prime candidate for the Clean Energy Future program to purchase and shut down 2 GW of the most carbon intensive generating capacity.
In 2011, homes, business and industry connected to the National Energy Market (the NEM, made up of Tas, SA, Vic, NSW and Qld) consumed 200 TWh of electricity. The power stations combined produced 186 Mt CO2. Hazelwood supplied 6% of the NEM’s power and 10% of the emissions.


So what happens if 6% of the generation is removed? Will we have rolling blackouts? Who will take up the slack?
A few years ago when demand was continuing to increase, this might have been a serious question. But, since 2008 total demand in Australia has been decreasing at between 1% and 2% per year, a decrease of almost a gigawatt.
The effect has been that generators are operating at lower capacity factors – with wholesale electricity prices not seen in a decade – and claims that no new fossil generating capacity will be required in Australia for a decade. That means no new state-of-the-art generators that would have much lower emissions than Hazelwood.
Hazelwood runs at an average of around 85% capacity, or 1.4 GW. So the 1 GW decrease in demand is close to the total contribution of Hazelwood. Turning it off would more or less take us back to the supply and demand balance of 2008.
This would have the effect of increasing wholesale electricity prices by around 2 c/kWh – returning prices to the levels seen before 2008, and restoring some investor confidence to build new and cleaner capacity.
Even without new capacity, the effect of shutting down Hazelwood and the slack being taken up by existing generators that have on average 30% lower emissions, would reduce CO2 emissions by 5 Mt per year, or 3% of Australia’s electricity sector emissions.
In the national energy market, there is around 50 GW of capacity listed. On average we use 22 GW – so there is plenty of capacity sitting idle much of the time, waiting for the extreme demand days when the temperature reaches into the 40s.
With 2 GW removed from the system, there is a concern that the system may struggle to meet peak demand. But those hot days tend to be sunny, when rooftop photovoltaic (PV) will be producing at its maximum. In the last two years almost 2 GW of solar PV capacity has been installed nationally. Just as long as we use our air-conditioners when the sun is shining.

This article was first published in The Conversation, reproduced with permission.