Sea-level rise projections are being ignored in a foolish bet by Australian governments that the more severe outcomes won't occur. Tens of millions of dollars are being wasted on risk assessments and adaptation reports that may soon be superceded.

How much sea levels will rise with climate change is fundamental to planning the future of our coasts, with more government money being spent on coastal adaptation studies than any other global warming impact in Australia. Hoping the worst won't happen is a risky approach, because the worst possibilities have the greatest impact on people, property and infrastructure, with possibly incalculable damage. Ignoring the science also opens the way to litigation for a failure to exercise duty of care by planning authorities. 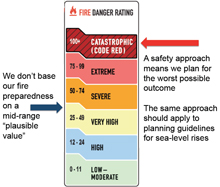 But that is precisely what governments – at national, state and local levels – are doing. They are simply ignoring what the science tells us about the range of projected sea-level rises this century, and hoping that some middle-of-the-road outcome is as bad as it gets.
This is equivalent to fire authorities – knowing the fire danger could run from moderate (green) to extreme (red) – planning on the assumption we will never have a day worse than the orange zone.

The Victorian State government has a sea-level rise planning standard of 0.8 metres by 2100, which Victorian local government and water management authorities based most of their work. [The government's March 2012 climate review, which saw both the 2020 emissions reduction target and minimum efficiency standards for generators scrapped, acknowledged forecasts of up to 1.1 metre, but the 0.8 metre planning standard remains unchanged.]

The federal government uses a maximum standard of 1.1 metres.
But the most up-to-date scientific projections says sea levels rises this century could be up to 2 metres.  This research is summarised in Sea-level rise projections: the case for a 2-metre standard, published on this site today.
How did this happen? The federal government’s 2009 report on “Climate Change Risks to Australia’s Coast” says that:

But then:
Clearly what was the "midrange" of the projections morphed into the “worst case”, without explanation. What should have been a 2-metre standard got whittled down to just 1.1 metre. This is illustrated in the chart which compares Victorian and federal planning standards with the scientific projections of sea-level rises this century.
The politics behind this is not clear. It may be another expression of the orthodoxy in climate policy-making that one can negotiate with the laws of physics and chemistry; or it may be a calculated attempt to reduce the political backlash.      In places like Singapore and the UK, planning is now based on sea level rises this century of 2 metres or more. In 2010, the UK Government Thames Estuary 2100 Project adopted a projection of 2.5 metres by 2100.
Planning and risk assessments must be based on the most up-to-date knowledge, including on sea levels.
Yet there is already history of this not being done.
Here is but one example. In 2008 I was invited to present to a community forum in the southern Melbourne bayside surburb of Frankston.  The first speaker was the director of a just-completed project, using half a million dollars of federal government money (as I remember), to study the consequences for the Westernport region of a maximum sea-level rise of half-a-metre (based on IPCC 2007) . I opened with words to the effect that: "At half a metre, it won't take too long to realise that half a million dollars has just been wasted by understating the problem...". And so it was. And it is still happening.
It won't be long before the current range has to revised upwards, again, as new observations conclude that dramatic climate change is happening sooner than expected. It is now acknowledged that the Arctic has passed the tipping point for sea-ice-free summers. That will increase Arctic warming (already double the global average) as heat-reflecting ice is replaced by dark, heat-absorbing open seas. Those circumstances will increase the rate of melting of the Greenland ice sheet, which is already accelerating. And now the tipping point for Greenland's ice sheet (eventual sea level rise of 7 metres) has been revised down from around 3 degrees C to just 1.6C (uncertainty range of 0.8C-3.2C). At the current temperature rise of 0.8C we may have already reached Greenland's tipping point, and with a temperature rise of more than 1.6C already in the climate system, we are very likely to within a decade or three.
And that is without considering why the Antarctic's Pine Island glacier loss must force another look at sea-level forecasts.
I just don't get why tens of millions continue to be wasted on adaptation planning that is not scientifically credible.