QUOTE OF THE WEEK

From Giles Parkinson on the race to the bottom by three State Liberal Premiers:
“There is a saying going around that the world did not leave the Stone Age because it ran out of stones. But what is the chance of it returning there if it runs out of brains?”
http://reneweconomy.com.au/2012/five-things-we-learned-this-week-74612

National US Record Events For March 2012
http://wx.hamweather.com/maps/climate/records/2012/03/us.html
An amazing map! 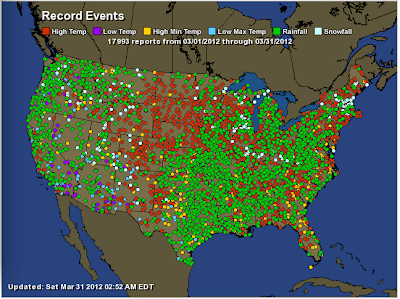 Connecting the dots: climate impacts day 5 May 2012
http://www.climatedots.org/
It’s time to Connect the Dots between climate change and extreme weather. Protest, educate, document and volunteer along with thousands of people around the world to support the communities on the front lines of the climate crisis
SEE MORE NEXT SECTION

6 Things You Should Know About The Value Of Renewable Energy
http://www.climatecodered.org/2012/03/6-things-you-should-know-about-value-of.html
Adam James, 29 March 2012

VICTORIA'S SHAME...
Baillieu’s anti-climate strategy doesn’t add up
http://reneweconomy.com.au/2012/baillieus-anti-climate-strategy-doesnt-add-up-99771
Victoria McKenzie-McHarg, Climate Spectator, 29 March 2012
My father once explained to me a theory that a Premier or Prime Minister was either a Leader, or a Smart Economic Manager. In his opinion, Whitlam was a Leader while Howard was a Smart Economic Manager.
BAILLIEU'S WEEK...
Vic govt abandons high emission target
http://news.theage.com.au/breaking-news-national/vic-govt-abandons-high-emission-target-20120327-1vv2f.html
The Baillieu government drops an election commitment to bring in limits on greenhouse gas emissions from new coal-fired power plants.
http://www.theage.com.au/victoria/no-emission-limit-on-new-coal-plants-20120327-1vwmu.html

WHILST IN QUEENSLAND....
Newman takes aim at climate and renewables
http://reneweconomy.com.au/2012/newman-takes-aim-at-climate-and-renewables-95574
Giles Parkinson, REnewEconomy, 27 March 2012
Newly elected Queensland Premier Campbell Newman is expected to move quickly to disband the state’s climate change and renewable energy programs, raising questions about whether the state’s $75 million contribution to the Solar Dawn project will remain intact.
AND
The dawn of a Queensland solar nightmare?
http://www.climatespectator.com.au/commentary/dawn-queensland-solar-nightmare

State of the planet and permafrost
http://www.physorg.com/wire-news/94217852/state-of-the-planet.html
PhysOrg.com, March 26, 2012
Time is running out to minimize the risk of setting in motion irreversible and long-term climate change and other dramatic changes to Earth's life support system, according to scientists speaking at the Planet Under Pressure conference, which began in London today.

Framing the way to relate climate extremes to climate change
http://www.springerlink.com/content/0008xl84w0743102/fulltext.html
Kevin E. Trenberth, Climatic Change, 21 March 2012
The answer to the oft-asked question of whether an event is caused by climate change is that it is the wrong question. All weather events are affected by climate change because the environment in which they occur is warmer and moister than it used to be.

How Global Warming Sharply Increases The Likelihood Of ‘Outlandish’ Heat Waves
http://thinkprogress.org/romm/2012/03/28/454281/global-warming-sharply-increases-likelihood-of-outlandish-heat-waves
Joe Romm, Climate Progress, 28 March 2012
The full 592-page (!) IPCC extreme weather report is out. Like most Intergovernmental Panel on Climate Change reports it has some value for people who don’t follow the science closely, which is to say the overwhelming majority of the media and policymakers.

A decade of weather extremes
http://www.nature.com/nclimate/journal/vaop/ncurrent/full/nclimate1452.html
Dim Coumou & Stefan Rahmstorf, Nature Climate Change, 25 March 2012
The ostensibly large number of recent extreme weather events has triggered intensive discussions, both in- and outside the scientific community, on whether they are related to global warming. Here, we review the evidence and argue that for some types of extreme — notably heatwaves, but also precipitation extremes — there is now strong evidence linking specific events or an increase in their numbers to the human influence on climate.
MEDIA RELEASE
Extreme Weather of Last Decade Part of Larger Pattern Linked to Global Warming
http://www.sciencedaily.com/releases/2012/03/120325173206.htm

“Strong” Links of Manmade Heat, Rainfall Extremes: Study
http://www.climatecentral.org/blogs/study-finds-strong-evidence-of-manmade-heat-and-rainfall-extremes/
Andrew Freedman, Climate Central, March 27, 2012
Following on the heels of the March heat wave, which was one of the most remarkable extreme weather events on record in the U.S., are two new scientific papers that discuss the relationship between extreme weather events and global climate change.

Why generators are terrified of solar
http://reneweconomy.com.au/2012/why-generators-are-terrified-of-solar-44279
Giles Parkinson, REnewEconomy, 26 March 2012
Here is a pair of graphs that demonstrate most vividly the merit order effect and the impact that solar is having on electricity prices in Germany; and why utilities there and elsewhere are desperate to try to reign in the growth of solar PV in Europe.

Plastics put solar on the verge, again
http://wwwp.dailyclimate.org/tdc-newsroom/2012/03/plastic-solar
Doug Struck, Daily Climate, March 21, 2012
Recent gains in the efficiency, lifespan and manufacturing of thin-film plastic solar panels have advocates convinced that, this time, solar really is on the verge of a revolution – even as the market crashes around them.

Top 5 nations that use renewable energy.
http://www.csmonitor.com/Environment/2012/0320/Top-5-nations-that-use-renewable-energy/Brazil-5-percent-of-world-total
Christian Science Monitor , 20 March 2012
Solar, wind, tidal and geothermal energy made up only 1.3 percent of total global energy use in 2011, but that's up 15.5 percent from the previous year.

Denmark aims to get 50% of all electricity from wind power
http://www.guardian.co.uk/environment/2012/mar/26/wind-energy-denmark
BusinessGreen/Guardian Environment Network, 26 March 2012
The country aims to supply 35% of its total energy from renewables by 2020 and 100% by 2050

US EPA to impose first greenhouse gas limits on power plants
http://www.washingtonpost.com/national/health-science/epa-to-impose-first-greenhouse-gas-limits-on-power-plants/2012/03/26/gIQAiJTscS_story.html
Juliet Eilperin, Washington Post, March 27, 2012
The Environmental Protection Agency will issue the first limits on greenhouse gas emissions from new power plants as early as Tuesday, according to several people briefed on the proposal. The move could end the construction of conventional coal-fired facilities in the United States.

Saving the Arctic with geoengineering only costs 24 million euros
http://www.bitsofscience.org/saving-the-arctic-geoengineering-5397/
Rolf Schuttenhelm, BoS, March 26, 2012
But not to linger, waiting till tomorrow will cost much, much more

Greg Hunt’s carbon illusion
http://www.climatespectator.com.au/commentary/greg-hunt-s-carbon-illusion
Ben Rose, Climate Spectator, 27 March 2012
Like Labor, the Coalition has committed to reduce carbon emissions 5 per cent by 2020. But the Libs’ ‘Direct Action’ plan has been dubbed ‘soil magic’ because over 60 per cent of reductions – 85 million tonnes of CO2 per year – are to be taken up by soil.

Fighting on the beaches as council orders retreat from climate change 'threat
http://www.theaustralian.com.au/news/nation/fighting-on-the-beaches-as-council-orders-retreat-from-climate-change-threat/story-e6frg6nf-1226308725029
Ean Higgins, The Australian, March 24, 2012
Like many working couples, Anne and Russell Secombe decided to find a place by the sea where they would eventually retire to live out the rest of their lives pursuing simple pleasures.

A flawed carbon pricing scheme lets states dump climate action
http://theconversation.edu.au/a-flawed-carbon-pricing-scheme-lets-states-dump-climate-action-6077
Alan Pears, The Conversation, 27 March 2012
In the past few days we have seen two states, Victoria and Queensland, announce cut-backs on action to reduce greenhouse gas emissions. They have been able to justify this by pointing out, correctly, that their actions would not cut Australia’s overall greenhouse gas emissions beyond the national target.

Lion's share for coal plants before the carbon tax bites
http://www.theage.com.au/victoria/lions-share-for-coal-plants-before-the-carbon-tax-bites-20120330-1w3tn.html
The Age, 30 March 2012
Victoria's dirtiest coal-fired power plants have snared the lion's share of $1 billion in energy industry carbon tax compensation - a concession that will protect jobs but slow the shift to renewable energy.

Arctic sea ice may have passed crucial tipping point
http://www.newscientist.com/article/dn21626-arctic-sea-ice-may-have-passed-crucial-tipping-point.html
Fred Pearce, New Scientist, 27 March 2012
The disappearance of Arctic sea ice has crossed a "tipping point" that could soon make ice-free summers a  regular feature across most of the Arctic Ocean, says a British climate scientist who is setting up an early warning system for dangerous climate tipping points.

Global warming: Tracking permafrost meltdown
http://summitcountyvoice.com/2012/03/28/global-warming-tracking-permafrost-meltdown/
Bob Berwyn, SCSV, March 28, 2012
One of the biggest concerns related to global warming is that rapid permafrost melting in northern latitudes could release a massive surge of additional carbon dioxide into the atmosphere.

On Solar Cycle Length and Global Warming
http://www.skepticalscience.com/Stauning_Friis_Christensen_Solar_cycle_length_Global_temperatur.html
Klaus Flemløse, Skeptical Science, 22 March 2012 by
In the scientific debate on global warming and the sun/cosmic rays relations, Friis-Christensen et al. have produced several fascinating and inspiring ideas. New and alternative ideas are always welcome and they deserve recognition for their contribution. Not all ideas have passed the test by the scientific community. However, it is clear that they have started a scientific debate and as well as a blog debate on solar influence and cosmic rays.

West Antarctic Ice Shelves Tearing Apart at the Seams
http://www.sciencedaily.com/releases/2012/03/120327134356.htm
ScienceDaily, Mar. 27, 2012
A new study examining nearly 40 years of satellite imagery has revealed that the floating ice shelves of a critical portion of West Antarctica are steadily losing their grip on adjacent bay walls, potentially amplifying an already accelerating loss of ice to the sea.

Rapid warming in SE Australia challenges plans to adapt gradually
http://theconversation.edu.au/rapid-warming-in-se-australia-challenges-plans-to-adapt-gradually-6076
Roger Jones, The Conversation, 30 March 2012
Step changes in warming of a few tenths to 1°C can produce rapid changes in risks such as extreme heat and fire danger.