BBC New reports that, as anticipated for two years (story below), "Pine Island Glacier (PIG), the longest and fastest flowing glacier in the Antarctic, has spawned a huge iceberg... The block measures about 720 square kilometres in area, roughly eight times the size of Manhattan Island in New York."
Confirmation that a fissure had spread across the full width of the glacier was confirmed on 8 July with images obtained from the German TerraSAR-X satellite (pictured at right).  The fissure was first observed in October 2011 (image below).
Of all the Antarctic glaciers, Pine Island is contributing most to sea-level rises. Ted Scambos of the National Snow and Ice Data Center (NSIDC) in Boulder, Colorado told National Geographic in early 2012 that iceberg calving is a normal cycle in which the floating section grows, stresses mount, and an iceberg breaks off, but when the pattern deviates, glaciologists take notice:


In this case, the crack is forming significantly farther "upstream" than has previously been the case. That "signifies that there are changes in the ice," Scambos said.
When "that point of rifting starts to climb upstream, generally you see some acceleration of the glacier." That means that the ice will flow into the ocean at a faster rate, contributing even more to sea level rise.
Such an acceleration is of particular concern at the Pine Island Glacier, because, among Antarctic glaciers, it's "the one that's contributing the most to sea level rise."
In fact, he said, ice flows from that glacier alone account for a quarter to a third of Antarctica's total contribution to sea level rise.

National Geographic reports that Antarctica's fastest-melting glacier is about to lose a chunk of ice larger than all of New York City, with implications for the rate of rise for sea levels. The crevasse (pictured) is 30 kilometres long and up to 80 metres wide, cutting across the floating tongue of the Pine Island Glacier in West Antarctica, and expected to create an iceberg of about 900 square kilometres.
That is larger than the area of Manhattan, Brooklyn, Queens, Staten Island and the Bronx combined, according to NASA. In Australian terms, it is larger than the Adelaide Metropolitan Region.
Eric Rignot of NASA's Jet Propulsion Laboratory says the monster iceberg will be created  "in the coming months for sure." 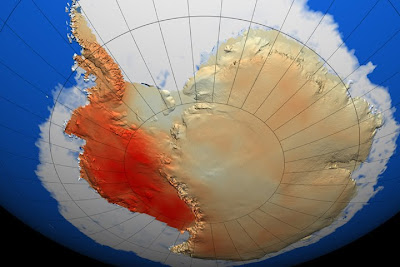 Update 28 June 2011: Columbia University researchers have just reported that "Ocean Currents Speed Melting of Antarctic Ice". They find that "Stronger ocean currents beneath West Antarctica’s Pine Island Glacier Ice Shelf are eroding the ice from below, speeding the melting of the glacier as a whole, according to a new study in Nature Geoscience. A growing cavity beneath the ice shelf has allowed more warm water to melt the ice, the researchers say—a process that feeds back into the ongoing rise in global sea levels. The glacier is currently sliding into the sea at a clip of four kilometers (2.5 miles) a year, while its ice shelf is melting at about 80 cubic kilometers a year - 50 percent faster than it was in the early 1990s - the paper estimates."
For discussion of map/image, see here.

The Victorian and Queensland governments decisions to stick to an "upper boundary" sea-level rise estimate of 0.8 metres by 2100 (and NSW at 0.9 metre) for planning purposes needs urgent revision, with new modelling showing two West Antarctic glaciers are past their tipping points.
The 0.8 metre estimate for sea-level rises to 2100 is already obsolete: 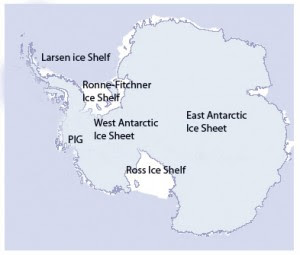 So how far could we reasonably expect sea levels to rise by 2100? As the world's oceans warm, they expand and sea-levels rise, but how quickly the loss of polar ice sheets will add to the rise is difficult to estimate, principally because ice-sheet and sea-ice dynamics are not sufficiently well understood, and they are subject to non-linear (rapid and unexpected) changes, such as is occurring with sea-ice in the Arctic. The question is no longer whether the Greenland and West Antarctic ice sheets (WAIS) are losing mass (they are!) but if and when they pass tipping points for large, irreversible ice mass loss, and how fast that will occur.
Recent research by Blancon et. al published in Nature in 2009 examining the paleoclimate record shows sea level rises of 3 metres in 50 years due to the rapid melting of ice sheets 120,000 years ago. Mike Kearney, of the University of Maryland, said it's "within the realm of possibility" that global warming will trigger a sudden collapse of the West Antarctic ice sheet, which could lead to a rapid increase in sea levels like that predicted by the study.
Given the catastrophic failure to date of global climate policy-making (Copenhagen outcome =4-degree rise by 2100), big sea level rises are on the way for the sort of temperature increases now on the table. NASA climate science chief James Hansen wrote in New Scientist that:


Oxygen isotopes in the deep-ocean fossil plankton known as foraminifera reveal that the Earth was last 2°C to 3°C warmer around 3 million years ago, with carbon dioxide levels of perhaps 350 to 450 parts per million. It was a dramatically different planet then, with no Arctic sea-ice in the warm seasons and sea level about 25 meters higher, give or take 10 meters.


Even if we would curb all CO2 emissions today, and stabilise at the modern level (387 parts per million by volume), then our natural relationship suggests that sea level would continue to rise to about 25 metres above the present.

Then on 13 January this year, New Scientist published this story showing calculations that the Pine Island glacier in the West Antarctic has likely passed its tipping point, with researchers estimating that this one glacier alone could add a quarter of a metre to sea levels by 2100:

Major Antarctic glacier is 'past its tipping point'

A major Antarctic glacier has passed its tipping point, according to a new modelling study. After losing increasing amounts of ice over the past decades, it is poised to collapse in a catastrophe that could raise global sea levels by 24 centimetres.
Pine Island glacier (PIG) is one of many at the fringes of the West Antarctic ice sheet. In 2004, satellite observations showed that it had started to thin, and that ice was flowing into the Amundsen Sea 25 per cent faster than it had 30 years before.
Now, the first study to model changes in an ice sheet in three dimensions shows that PIG has probably passed a critical "tipping point" and is irreversibly on track to lose 50 per cent of its ice in as little as 100 years, significantly raising global sea levels.
The team that carried out the study admits their model can represent only a simplified version of the physics that govern changes in glaciers, but say that if anything, the model is optimistic and PIG will disappear faster than it projects.
Richard Katz of the University of Oxford and colleagues developed the model to explore whether the retreat of the "grounding line" – the undersea junction at which a floating ice shelf becomes an ice sheet grounded on the sea bed – could cause ice sheets to collapse.
....
The model suggests that within 100 years, PIG's grounding line could have retreated over 200 kilometres. "Before the retreating grounding line comes to a rest at some unknown point on the inner slope, PIG will have lost 50 per cent of its ice, contributing 24 centimetres to global sea levels," says Richard Hindmarsh of the British Antarctic Survey, who did not participate in the study.
This assumes that the grounding line does eventually stabilise, after much of PIG is gone. In reality, PIG could disappear entirely, says Hindmarsh. "If Thwaite's glacier, which sits alongside PIG, also retreats, PIG's grounding line could retreat even further back to a second crest, causing sea levels to rise by 52 centimetres." The model suggests Thwaite's glacier has also passed its tipping point.

.... and now comes a new report in Science that an undersea ridge that may have once helped slow the loss of the Pine Island glacier is no longer doing so...


Antarctic Glacier Off Its Leash

... which makes Fred Pearce's prediction (which we quoted in Climate Code Red two years ago, page 47) look spot on....


Another vulnerable place on the West Antarctic ice sheet is Pine Island Bay, where two large glaciers, Pine Island and Thwaites, drain about 40 per cent of the ice sheet into the sea. The glaciers are responding to rapid melting of their ice shelves and their rate of ﬂ ow has doubled, whilst the rate of mass loss of ice from their catchment has now tripled. NASA glaciologist Eric Rignot has studied the Pine Island glacier, and his work has led climate writer Fred Pearce to conclude that ‘the glacier is primed for runaway destruction’. Pearce also notes the work of Terry Hughes of the University of Maine, who says that the collapse of the Pine Island and Thwaites glaciers — already the biggest causes of global sea-level rises — could destabilise the whole of the West Antarctic ice sheet. Pearce is also swayed by geologist Richard Alley, who says there is ‘a possibility that the West Antarctic ice sheet could collapse and raise sea levels by 6 yards [5.5 metres]’, this century.

So much for 0.8 metres being a risk-averse foundation for sea-level rise planning and policy-making.
And for a fuller discussion on the current research on PIG and recent observations, there is a great overview, "Is Pine Island Glacier the Weak Underbelly of the West Antarctic Ice Sheet?" at RealClimate, from November 2009.