Thick smoke blew down into Vancouver, Seattle and Portland. Then it blew back right across the continent, thousands of miles across the Prairies, as far as Ontario and New York State. Then the smoke was rained out in the East, where a series of strange storms stoked up alternating high heat with hard-to-bear humidity, followed by unseasonable cold. Nobody in North America got a free pass to enjoy the summer.

And that's the thing. During my life, summer was the time of good weather you could count on, except for the occasional thunder storm. Now in the age of climate change, summer is the season to survive.  When I was growing up, old people feared the winter. More old people and babies used to die during cold weather. Now in these new climate times, the story has changed. Everyone should fear the summer.

There were surprising heat deaths in Quebec Canada in 2018.  Up to 70,000 people were killed by heat in Europe 2003.  There were likely 60,000 excess deaths in the Russian heat wave of 2010. In Australia heat deaths have over taken car deaths and all other natural hazards for mortality.  Year after year California and the West burn down in the heat.  The American North is beginning to feel like the South used to feel. In the new age of global warming, around the world we will dread the coming of summer. Think about that.

Like wildfire, heat spread around the northern half of the world in 2018. The roof of the Science Centre in Glasgow Scotland melted and flowed down the walls. Roads melted all over. Ireland found itís highest-ever recorded temperature on June 28.

The UK, normally not a home for heat waves, was baking too ñ as hot as 37°C. (98°F). Our UK listeners are not used to that at all. The Mirror's headline blared "UK weather: Killer heatwaves to become the new normal and will treble number of heat-related deaths". Stores in London ran out of fans. Scientists from the University of Oxford said the summer of 2018 is the future, with the UK heatwave made "twice as likely by climate change".

No doubt you heard Portugal and Spain also suffered through record-breaking temperatures. For a day, Lisbon Portugal was the hottest city on the planet. Greece burned with heat and then burned with deadly fires.

In Armenia, the Capital city Yerevan hit a new record of 107.6°F in 2018. Night-time temperatures remained high, which is very dangerous for human health. Several places in the south of Russia beat their all time heat records. According the Capitol Weather Gang at the Washington Post, Tbilisi, Georgia also set their all time high on July 4, 2018 with 104.9°F, or 40.5°C.


The Arctic and Scandinavia

The Arctic is supposed to be the world's refrigerator. But on July 18, 2018 far northern Finland, at 70 degrees North latitude, hit 33°C, 91°F. All of Scandinavia was rocking hot.  The European weather site, meteoalarm.eu, reported: "Norway's July temperature deviation was 5.3°C, which resulted in the hottest summer since measurements began in 1900."

Or take northern Siberia where it's supposed to be cold. On July 5, temperatures were 40°F above normal, well over 90°F or 32°C — above the Arctic Circle! That is nuts. Smoke from Siberian wildfires crossed Alaska, into Canada, and as far away as New England!

Canada was roasting. Toronto had 18 days over 30°C, in the high 80's Fahrenheit  — double what used to be "normal". The morgue in Montreal Canada went over capacity with 84 killed by high heat. Both Montreal and the Canadian capital of Ottawa set all-time record extreme combinations of heat and humidity at midnight. Hot humid nights don't just cost sleep, they kill.

The hottest temperature ever recorded in Africa  — and that's saying something! —  was recorded July 5th in Algeriaís Sahara Desert. It was 51°C, 123.8°F. That sounds like another planet, one closer to the sun, but now it's our planet.

In 2019 more new all-time high heat records were set from Alaska to France.  The American East and South baked multiple times with life-threatening heat.  Europe too.  The Arctic was hardly the Arctic.  Alaska set new heat records again.  Nunavut Canada was the hottest ever recorded north of 80 degrees latitude. 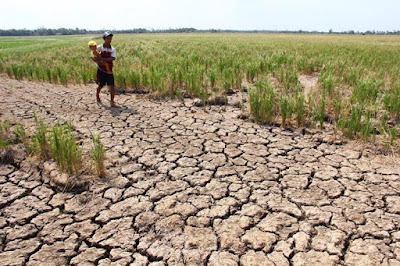 India was again seared with life-threatening heat for a couple of weeks before the Monsoon.  While waiting for this year's big rains, the major city of Chennai, formerly known as Madras, went dry. The government had to truck in water non-stop for over six million residents. Millions of villagers in many parts of India had to leave their dry wells for help elsewhere. 35 major dams were bone dry. They left without food in deadly heat, hovering in the mid-40°C, over 110°F. At least 100 people died in the Eastern state of Bihar alone.

A few days before the great 2019 heat wave in Europe, the whole of North Africa was over 40°C (104°F), building to 50°C in places (122°F). The same for the Middle East. There was a band of high heat from the Caspian to Northern China, with high temperatures in Siberia.

In one 2019 heat wave, fifteen hundred people died in the record heat in France alone.  Our medical guests tell you how heat kills.

In fact there were three heat waves in Europe during the summer of 2018.  The first two roasted northern European countries from France through Germany and beyond.  The last one in August landed more on Scandinavia where temperatures were 20°F above normal.  These are the large-scale repetitive heat waves our scientific guests will warn you about.

June 2019 was the hottest June ever recorded on the planet, with July following in those foot-steps.  We are entering a new heat state never experienced by modern mammals, certainly not during the last three million years.  As you will hear in our interviews, about half of American cities are expected to experience heat and humidity right off the current measurement charts.  We have to way to express or warn about these "no analog" heat events.

No human being has ever seen heat like this.  Heat waves are coming one right after another.  In multiple waves there is with no chance for people, crops, and animals to recover.  Nature's seasonal timing is being disrupted by early and late heat - one reason why insects and birds are disappearing.

The heat is spreading wider, spanning continents and sometimes covering a whole hemisphere.  Extreme heat is now a key player in the unfolding global climate emergency.  Rising seas may displace you, but heat can kill you.  Extreme heat is a personal threat to all of us.  We need to understand it a lot better.