Canberra unprepared for climate upheavals that will rock the nation

Covid-19 should teach us the value of being fully prepared for catastrophic risks, but on climate disruption risks the Australian Government is walking blindfolded off a cliff. 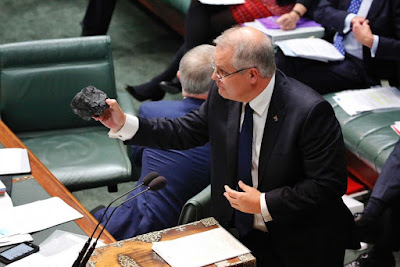 Unprecedented bushfires, Covid-19 and climate warming all raise the question of the preparedness of governments to deal with catastrophic risks, and what allows nations to successfully respond to big crises.

Those lauding the Australian Government for its pandemic response overlook the fact that, early on, this nation may have been on the disastrous "herd immunity" policy path. On 15 March, the Chief Medical Officer defended keeping schools open because “if they (school children) are getting infected and they’re perfectly well, whilst they might spread it, it also creates a herd immunity”. Australia appears to have changed course due to the stronger advocacy by State premiers, and the alarming early evidence from Italy and Spain about the consequences when the virus takes hold of a population.

In his recent book, Upheaval: How nations cope with crisis and change, geographer and anthropologist Jarod Diamond concludes that the key predictors of success in facing crises are “acknowledgment rather than denial of a crisis’s reality; acceptance of responsibility to take action; and honest self-appraisal”, plus the “presence or absence of a shared national identity” which can help a nation’s people recognise shared self-interest and unite in overcoming a crisis.

The first step to success is to recognise the reality of a potential crisis. Pandemics and climate change, along with nuclear, biological and chemical weapons of mass destruction, ecological collapse, asteroid impact, supervolcanic eruption and artificial intelligence are catastrophic, and potentially existential, risks.

Existential threats require a particular approach to risk management. This includes:
But that is precisely what the Australian government is not doing. It is not assessing the real threats of climate change, and appears to have no explicit laws, regulations or policies that require departments to regularly undertake specific assessments of catastrophic or existential threats to Australian society and the global community, even though the World Economic Forum recognises that the world's "top risks are environmental".

The Australia Government's approach is a fundamental dereliction of its duty of care when there is growing global understanding that climate disruption now manifests as an emergency in which the climate system is close to tipping points that could drive it to a “point of no return”, where further warming would become self-sustaining.

In one troubling revelation last year, contrary to sound risk management practices, Australia’s then intelligence chief, Nick Warner, said that the government’s intelligence services do not look at worst-case scenarios: “That is exactly what we don’t do, what we do is tell the government how we see the situation now and how we think it will develop, not the worst case... what we think actually is happening now, what actually will happen in the future.  If you go around putting forth worst-case scenarios all the time you will alarm, and probably alarm needlessly, so that is exactly what we don’t do."

Since the Howard Government, the senior levels of the Australian Public Service (APS) have become politicised and are generally unwilling to carry out preparatory work that is contrary to the government’s desires. Consequently, thinking that would have once been done about high-risk eventualities is not being done well, or at all, especially in regard to climate change. Initiating work on climate change within the APS that is not specifically mandated by ministers is, in general, not occurring.

Thus the government was ill-prepared for the drought and the APS scrambled to catch up as the drought worsened and the government came under pressure from its rural base. Likewise, when Australia bought into the China-US contest in the Pacific just as Prime Minister Morrison was parading his coal credentials and alienating Pacific leaders, there was a scramble within the government to produce up-to-date assessments of climate impacts in the region, and policy options.

Senior Australian Government emergency management officials wrote a plan on how to prepare for the increasingly dire effects of fires and other natural disasters, which warned of disasters on “unimagined scales, in unprecedented combinations, and in unexpected locations,” with effects “likely (to) exceed the capacity of the nation. The consequential damage, loss, and suffering would be immense and enduring.” And the warnings from state-based fire chiefs who have the primary responsibility for disaster response were unambiguous. The government’s response was to refuse to even meet former fire chiefs; funding for more water-bombing aircraft was turned down; and the natural disaster plan gathered dust for 18 months.

At present, if APS personnel wish to initiate broader thinking on climate issues, there is political incentive to ensure that the work is not overtly identified as climate-focused because it could lead to the project being closed down. This is a particularly stark expression of how the current government’s ongoing denial of the real climate risks has neutered public policy advice. In reality, there is an almost total absence of sound analysis and risk assessment of climate impacts within the Australian government, and the climate risks to human and global security are poorly understood.

Likewise, the security think-tank sector, which depends in part on federal government spending, has not given priority to high-end climate risks and security issues by way of publications, advocacy or public events. And large businesses and business umbrella organisations have also failed to demonstrate any significant awareness of how the climate-security nexus and the high-end risks are projected to affect their operations or how they will respond.

In the award winning Australian documentary Home Front, some of Australia's most senior former security, defence and political leaders warned that climate change is “a catalyst for conflict” and a “threat multiplier,” as it fuels instability in the world’s most vulnerable regions. Whilst climate change may first present as changes in temperature, precipitation and escalating extreme climate events, these will increasingly manifest as drought, desertification, severe food and water insecurity, unbearable heat, and threats to buildings, infrastructure and coastal regions.

There is an unacceptable risk that these processes will have large-scale socio-political consequences that include mass forced migration, state failure, regional conflict and the breakdown of relations between nations, as illustrated by the Syrian war. If warming continues along its present path, the world will likely reach 3°C of warming around 2050-2060, leading to widespread social breakdown and a threat to human civilisation and contemporary societies, described by US national security analysts as “outright chaos”.

These risks may be characterised as threats to national security, but equally as threats to human security understood as the protection, safety and well-being of the population. Hence the urgent need for climate and security analysis to become an integral part of the public climate conversation and incorporated into a whole-of-government approach to existential risks.

In Jarod Diamond’s terms, the nation’s future requires acknowledgment rather than denial of a crisis’s reality, and acceptance of responsibility to take action.