by David Spratt. Second in a series 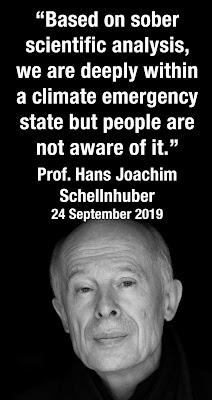 Our climate is already too hot, with dangerous heatwaves and bushfires, droughts and crop failures, and coastal flooding becoming more intense and destructive.

But Australia’s government, held back by vested interests, is failing to protect us and the things we care about.

Like other emergencies, together we need to take every possible effort to restore a safe, healthy climate. We have the resources and knowledge to succeed.

If the government makes climate its primary focus and strives to make big changes within a decade, and the community makes a wholehearted effort, we can succeed.

Is climate an emergency?

An emergency situation is a threat to people, property and/or society that has the potential to overwhelm them. So why has climate warming now reached this emergency condition?

With the present level of warming — 1.1°C higher than the late-nineteenth century — the Earth is already too hot and unsafe: we are in danger now, not just in the future. Catastrophic heatwaves and bushfires, droughts and crop failures, and cyclones and coastal flooding are reaching around the globe: from the Mediterranean to Mozambique, from south Asia to the Philippines, in the Pacific and across the United States.

The Great Barrier Reef and other coral systems are dying, and the world is now facing the sixth mass extinction in history. The world’s insects are hurtling down a path to extinction, threatening a “catastrophic collapse of nature’s ecosystems”, according to a recent global scientific review which found that the total mass of insects is falling by a precipitous 2.5% a year.

As well, we are greatly exceeding Earth’s limits. The growth in physical resource use is unsustainable, and will lead to resource and economic overshoot and collapse unless we change path.

Climate change is contributing to food and water shortages and declining crop yields. Rising food prices driven by drought, wildfire and harvest failures have already become catalysts for social breakdown and conflict across the Middle East, the Maghreb and the Sahel. Climate change has become an accelerant to social instability.

Drought, desertification and high food prices were drivers of the terrible civil war in Syria and the displacement of 11 million people, which led to the European refugee crisis. This in turn created political difficulties within the European Union and many of its members with the rise of far-right parties. National security analysts say that if warming reaches 3°C — which the world will exceed in three to four decades on current policies — the international order between nations will break down and the world might move into a state of “outright chaos”.

Of particular concern are climate tipping points, the passing of critical thresholds which result in step changes in the climate system that are irreversible on human timescales without herculean human interventions. We have already passed some of these, including for a multi-metre sea-level rise from the melt of West Antarctic glaciers, the loss of the world’s coral ecosystems, and conditions in summer where there will be no sea (floating) ice in the Arctic. Some other potential tipping points and big changes in important climate system elements— such as the loss of the Greenland Ice Sheet and the Amazon rainforest — are not that far away.

Recently, attention has been given to a “hothouse Earth” scenario, in which system feedbacks and their mutual interaction could drive the Earth System climate to a “point of no return”, whereby further warming would become self-sustaining. This “hothouse Earth” planetary threshold could exist at a temperature rise as low as 2°C, possibly even lower.

Yet the failure so far of nations collectively to face the climate crisis means that these are precisely the sorts of events we are heading towards.

If the current commitments by nations under the Paris Agreement to reduce their greenhouse pollution are not greatly improved, we face catastrophic warming of at least  3°C within a lifetime and possibly 5°C by century’s end, threatening to make large parts of the world and food-growing lands uninhabitable. This includes regions ruined by drought and desertification (for example, Australia’s Murray-Darling Basin, sub-Saharan Africa, southern Mediterranean, south-western USA), areas too hot to live in year-round (parts of South Asia and the Middle East) or rising seas (for example, the food-growing river deltas in India, Vietnam, Bangladesh and Egypt).

We have learned from studies of past climates that the current level of greenhouse gases produced conditions that would be catastrophic for today’s human society. In the mid-Pliocene around three million years ago, greenhouse gas levels were similar to today and temperatures were around 3°C warmer and sea levels at least 25 metres higher.

Climate warming is an existential risk to human civilisation. Scientists warn that warming of 4°C is incompatible with an organised global community, is devastating to the majority of ecosystems, and has a high probability of not being stable. The World Bank says it may be “beyond adaptation”. But an existential threat may also exist for many peoples and regions at a significantly lower level of warming.

The Emeritus Director of the Potsdam Institute, Prof. Hans Joachim Schellnhuber, warns that “climate change is now reaching the end-game, where very soon humanity must choose between taking unprecedented action, or accepting that it has been left too late and bear the consequences”.  He says that if we continue down the present path “there is a very big risk that we will just end our civilisation. The human species will survive somehow but we will destroy almost everything we have built up over the last two thousand years”.*

Our responsibility is to match actions to the size and urgency of the problem, in order to protect who and what we care about. We have four levers at our disposal and deployment of the first three is essential:

BOX: What is a safe climate?

Our climate is already too hot, and already dangerous. Significant tipping points have already been crossed.

Our goal can only be the maximum  protection of peoples, societies and nature.

History shows that, in the long run, sea levels on average change by 10–20 metres for every 1°C change in the global average temperature, so even a rise of 1.5°C in the global temperature compared to the late-nineteenth century would eventually drown cities and nations.

The period of human civilisation (fixed settlement) over the last 10,000 years, known as the Holocene, has coincided with or been made possible by the fact that temperatures and sea levels have been relatively stable over that time.

During the Holocene, temperatures have varied by about 0.5°C, with conditions a little warmer in the early Holocene than in the more recent centuries.  That was before large-scale burning of fossil fuels started to drive the temperature up.

When human-caused warming passed 0.5°C in the 1980s, we departed Holocene conditions and started on a foolish adventure: to see if human societies could exist and flourish in climate conditions modern humans have never before experienced.

So warming of up to 0.5°C compared to the late nineteenth century is within the Holocene range, and this range of 0–0.5°C helps us define what is a safe climate for contemporary human society.


Note: For background and references to the science studies discussed here, see the Breakthrough reports and papers at breakthroughonline.org.au.