Here is a question we need to ask: are climate policy makers actually pursuing the goals they set themselves more than 20 years ago, or have the goals been abandoned, and are we falling fast through an "adaptation gap"?

Like the United Nations, the United Nations Framework Convention on Climate Change (UNFCCC) and the Conference of the Parties (COP) are diplomatic fora, populated by professional representatives of national ruling elites, and subject to the diplomatic processes of negotiation, trade-offs and deals. Civil society sectors are excluded from formal decision-making.

As one example, the COP 21 Paris Agreement is almost devoid of substantive language on the cause of human-induced climate change and contains no reference to “coal”, “oil”, “fracking”, “shale oil”, “fossil fuel” or “carbon dioxide”, nor to the words “zero”, “ban”, “prohibit” or “stop”. By way of comparison, the term “adaptation” occurs 85 times in 31 pages, though responsibility for forcing others to adapt is not mentioned, and both liability and compensation are explicitly excluded.

The Agreement has a goal but no firm action plan, and bureaucratic jargon abounds, including the terms “enhance” (58 times) and “capacity” (59 times).

At COP 21, the proposed emission cuts by individual nations were voluntary (unilateral) and without an enforceable compliance mechanism. In a practical sense, the Agreement cannot be considered “binding” on signatories. The voluntary national emission reduction commitments are not critically analysed in the Agreement, but noted to be inadequate for limiting warming to 2 degrees Celsius (°C).

In fact, the Paris voluntary national commitments would result in emissions in 2030 being substantially higher that in 2015 and are consistent with a 3°C warming path, and significantly higher if the warming impacts of carbon cycle feedbacks are considered. Unless dramatically improved upon, the present commitments exclude the attainment of either the 1.5°C or 2°C targets this century without fantastic assumptions about negative emissions.

So what’s the goal in all this diplomacy?

The UNFCCC’s stated primary goal is to prevent "dangerous anthropogenic influence with the climate system". But what is “dangerous”?

Traditionally, policy makers have focused on the 2°C target, but the Paris Agreement emphasises “holding the increase in the global average temperature to well below 2°C above pre-industrial levels and pursuing efforts to limit the temperature increase to 1.5°C”.

As warming has advanced, scientists are distinguishing between "dangerous" (1-2°C band) and "very dangerous" (above 2°C) climate warming.

But we now have clear evidence that significant tipping points –– for example, summer sea-ice free Arctic conditions, the loss of West Antarctic glaciers and a multi-metre sea level rise –– have already been passed at less than 1°C of warming. (1)

In other words, climate change is already dangerous, but the UNFCCC apparatus has refused to acknowledge this reality, proposing warming targets significanty higher than 1°C as policy goals. The question as to what would be safe for the protection of people and other species is not answered, nor even asked.

As well, evidence is accumulating that at just the current 1°C level of warming more elements of the system may be heading towards tipping points or experiencing qualitative change. These include the slowing of the major sea current known as the Atlantic conveyor, likely as a result of climate change; accelerating ice-mass loss from Greenland; declining carbon efficiency of the Amazon forests and other sinks; and the vulnerability of Arctic permafrost stores. 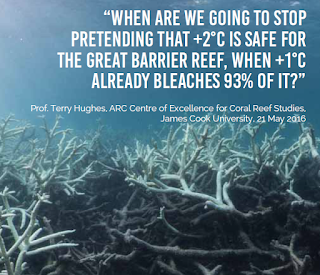 If climate change is already dangerous, then the only logical conclusion to be drawn is that by setting the 1.5°C and 2°C targets, the UNFCCC process has abandoned the goal of preventing "dangerous anthropogenic influence with the climate system”.

The UNFCCC key goals ”to ensure that food production is not threatened" and achieving "a time-frame sufficient to allow ecosystems to adapt naturally to climate change" have been discarded for all practical purposes.

Food production is already threatened by rising sea levels and inundation, shifting rainfall patterns and desertification, and extreme heatwave and wildfire episodes. Such events became a driver of the “Arab Spring” and a threat multiplier in the Syrian conflict and in Darfur. (3)

Ecosystems including corals, mangroves and kelp forests in Australia are degrading fast as the world's six mass extinction gathers pace. Major ecosystems are now severely degraded and climate policy-makers have no realistic agreement to save or restore them, from the Arctic to the Amazon, from the Great Barrier Reef to the Sahel.

The Paris Agreement recognised the “fundamental priority of safeguarding food security” . Note the change from the original 1992 goal which was to “ensure” food production is not threatened.

The Paris Agreement made no references to time-frames sufficient to allow ecosystems to adapt naturally to climate change, suggesting this goal has been (literally) dropped.

So with the UNFCCC’s foundational 1992 goals now abandoned, what are the new objectives of the UNFCC and COP processes?

Some would say that it is to mitigate (reduce) emissions to a temperature level where adaptation to hotter conditions can be reasonably achieved and, conversely, to adapt to what cannot be mitigated.  This assumes that there is a "sweet spot" around 2°C where the capacity to mitigate and the capacity to adapt overlap. This is the current policy-making paradigm.

But the evidence at the moment is that  world's mitigation efforts will take us towards 3°C or more, and many systems are collapsing or close to collapse at just 1°C, leading to a huge "adaptation gap" through which human societies and planetary systems are falling, fast.

(3) Werrell and Femia (eds) (2013) The Arab Spring and Climate Change, Centre for American Progress/Stimson/The Center for Climate and Security, Washington