"Saving the Reef": The triumph of politics over science? 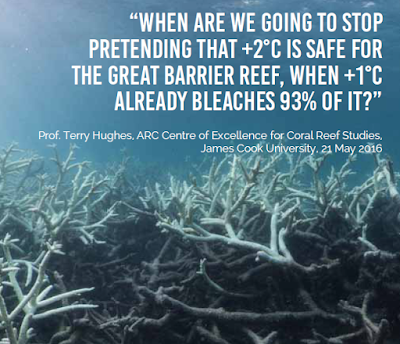 The Great Barrier Reef is an election issue.  Labor has just promised $400 million for the Reef. The government had previously committed $170 million, but one of Australia's leading coral researchers says that "Australia's plan for protecting Great Barrier Reef tourism is to pretend climate change isn't it's biggest threat."

Neither of the major parties are opposed to the expansion of coal mining in Australia. The question is whether the policies of either major party will actually "Save the Reef," or is this a case of politics triumphing over science?

This year, at just 1°C of global average warming, large swathes of the northern areas of the Reef were killed by record warmer waters which are a consequence of climate change.

Before this mass bleaching started, the Great Barrier Reef had lost 50% of its coral cover due to the effects of tropical cyclones, crown-of-thorns starfishes and reduced water quality, as well as climate change.  With this year's bleaching, that figure is now closer to 65%.

Prof. Terry Hughes of the ARC Centre of Excellence for Coral Reef Studies at James Cook University says of surveys of the 2016 bleaching: "The saddest, most confronting results in my career: Average 35% loss of corals from bleaching in just 2-3 months" (in the northern and central Reef).

In two decades, this year's occurrence will be a normal event if warming follows its projected course.  Melbourne University researchers say that: “March 2016 was clearly extreme in the observed weather record, but using climate models we estimate that by 2034 temperature anomalies like March 2016 will be normal”. In this scenario, reefs simply will not have the 10–15 years’ recovery time they need, and will fall into a spiral of more frequent bleaching events followed by increasingly inadequate recovery periods.

Moderately bleached corals can recover, but with severe bleaching mortality is high. Colonies may start to re-grow after healthy upstream reefs spawn; but it takes 10–15 years for reefs to regain health and that only happens if there is no further bleaching over that time. An adequate recovery time is crucial, somewhat like forests after a fire.

It is now clear that at 1°C of warming, let alone another 0.5°C which is in the system now, we will get bleaching events sufficiently often for the Reef to fall into a death trap of severe bleaching and inadequate recovery times. To save the Reef, global warming would need to be reduced to well below the current warming of 1°C, whereas in fact it is heading way past 2°C.

“When are we going to stop pretending that +2°C is safe for the Great Barrier Reef, when +1°C already bleaches 93% of it?”, asked Prof. Hughes:

When are we going to stop pretending that +2C is safe for #GreatBarrierReef, when 1C already bleaches 93% of it? pic.twitter.com/umc0Imidwd
— Terry Hughes (@ProfTerryHughes) May 20, 2016

In 2009, Australian scientists contributed to an important research paper, "Limiting global warming to 2 °C is unlikely to save most coral reefs",  which found that preserving more than 10% of coral reefs worldwide would require limiting warming to below 1.5°C.

On the 6 July 2009, the Royal Society, the Zoological Society of London and the International Programme on the State of the Ocean facilitated a Coral Reef Crisis meeting to identify key thresholds of atmospheric carbon dioxide needed for coral reefs to remain viable. It concluded that:


To ensure the long‐term viability of coral reefs the atmospheric CO2 level must be reduced significantly below 350 parts per million carbon (ppm). In addition to major reductions in CO2 emissions, achieving this safe level will require the active removal of CO2 from the atmosphere.

Pioneer Australian coral researcher Charlie Veron told that meeting: “The safe level of atmospheric carbon dioxide for coral reefs is ~320 ppm (and) sets the safe limit for a healthy planet during a time of abrupt greenhouse-driven climate change.” Today’s level is 400 ppm and rising.


Sadly, almost all climate models show that meaningful recovery of corals along the Great Barrier Reef (and many other parts of the world) may be very difficult, if it is even possible at all.
Research published by scientists at NOAA’s Coral Reef Watch program and Australia’s James Cook University and University of Queensland found that our changing climate and warmer ocean temperatures might increase coral bleaching along the Great Barrier Reef even more than previously thought.
The researchers found that corals handle bleaching conditions better if they get a “practice run” in the weeks before the bleaching event. If the corals are exposed to a brief stretch of warmer than normal (but below bleaching threshold) temperatures followed by a cooler recovery period of 10 days or so, it’s like they get a chance to “brace for impact.” The corals go through a heat shock response, increasing the corals’ heat tolerance and reducing the severity of bleaching and likelihood of death. All of this comes in handy when waters warm enough to meet bleaching conditions.However, if ocean waters warm by as little as 0.5°C overall, as predicted for the near future, there won’t be a pre-stress practice run. Without it, corals are at a greater risk of dying during bleaching, which means reefs are more likely to see a faster decline in coral cover.
The 2016 coral bleaching event is probably not an isolated event, just a combination of El Niño and bad luck. Instead, it is a sign of things to come thanks to climate change. An increasing number of worsening bleaching events destroying the corals across the Great Barrier Reef and may ruin one of the natural wonders of the world.
Work can be done to protect the reefs. Better management that reduces other human-caused stresses can reduce the bleaching risk. However, as researchers showed, under high greenhouse gas emission scenarios, the outlook for the Great Barrier Reef is pretty dire. The research showed that the way to greatly improve the outlook for the reef was aggressive action to reduce greenhouse gas concentrations."

Neither of the large parties in this election have elaborated the sort of climate emergency action plan that might hold warming to even 1.5°C, and then try and establish methods that could actually get temperatures and greenhouse levels back to a point where the Reef would actually survive and re-grow.

And neither have committed to increase the foreign aid budget to the extent necessary for our neighbours to face the coral emergency.

Coral reefs provide food and resources for over 500 million people along tropical coastlines, as well as coastal protection against storm surges. If the world’s coral systems are lost, coastal ecosystems will only be able to provide 20–50% of the fish protein that they do today for those half a billion people. Australia’s neighbours are particularly vulnerable.

The Coral Triangle — encompassing Indonesia, Philippines, Malaysia, Papua New Guinea, the Solomon Islands and Timor Leste — contains 76% of the world’s reef building corals and over 35% of the world’s coral-reef fish species. It is the richest place on earth in terms of biodiversity

The 100 million people who live along the coasts of these islands depend on healthy ecosystems such as coral reefs, mangroves and seagrass beds to provide food, building materials, coastal protection, and support industries such as fishing and tourism.

The 2016 mass bleaching extended from Tanzania to French Polynesia, devastating reefs in Australia’s Kimberley region, at India’s Lakshadweep Archipelago, at Reunion Island in the western Indian Ocean, around the Seychelles, Christmas Island and in New Caledonia, as well as the Great Barrier Reef.

Putting politics before science is not sound policy, but a convenient illusion.