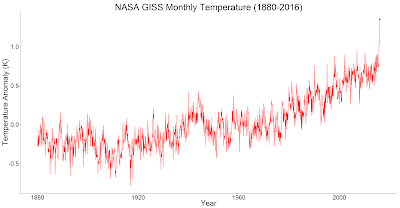 Those who thought Paris was a reasonable deal with a stated aim of keep warming “well below 2°C above pre-industrial levels” and to “pursue efforts to limit the temperature increase to 1.5°C” but then signed off on an agreement that means emissions will be higher in 2030 than they are now should be in a state of complete shock. And embarrassment. Australia's chief scientist has warned the planet is "losing the battle" against climate change. It has taken just three months for the Paris climate accord to become a relic, completely disconnected to the task the world now faces.

So how do we untangle all the figures?

The 1.35°C figure from NASA is from the norm for February for 1950-1980. The instrumental temperature record goes back to 1880 and early instrumental data and model simulations allow a reasonable estimate for the northern hemisphere for warming since 1750, which is the "pre-industrial" starting point.

The record shows 0.3°C warming from ~1900 to the NASA 1950-1980 baseline, and Prof Michael Mann told Climate Code Red that the proxy data shows around another 0.3°C from 1750 to the end of the nineteenth century for the northern hemisphere.

"Adding the figures together, we can estimate February 2016 as being around 1.95°C warmer than the 1750 pre-industrial level for the northern hemisphere, and 1.65°C warmer than the beginning of the twentieth century for the planet as a whole", says Mann. "It emphasises the point I have made previously that we have no carbon budget left for the 1.5°C target and the opportunity for holding to 2°C is rapidly fading unless the world starts cutting emissions hard right now".

It was the most abnormally warm month on record, beating the previous record of 1.13°C set in January this year by a whopping 0.22°C.

And whilst the increase from the 1950-1980 norm was 1.35°C for the planet, NASA says that for the northern hemisphere it was 1.9°C, making that hemisphere's warming for February to more than 2.4°C over the mid-18th century pre-industrial mark.

It seems that the UK Met Office's prediction that 2016 will be hotter than record breaking 2015 is on track.

The current El Nino conditions have contributed to the record figures, but temperatures are about 0.5°C hotter than the previous strong El Nino in 1997-98, showing how much global warming we have had since then. Joe Romm at Climate Progress notes that: "compared to previous big El Niños, we are experiencing blowout temperatures".

"Perhaps even more remarkable is that February 2015 crushed the previous February record [set during the peak of the 1997-98 El Nino] by a massive 0.47C,"  wrote Dr Jeff Masters and his co-author Bob Henson on the Weather Underground blog. 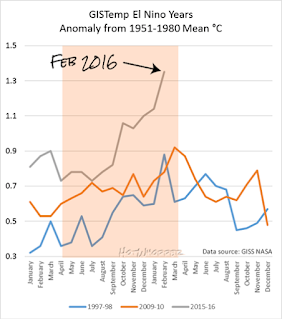 And the pattern this time is different from the previous strong El Ninos, as the chart at left shows.

Stefan Rahmstorf, from Germany's Potsdam university and a visiting professorial fellow at the University of NSW, says that: "We are in a kind of climate emergency now".

And that emergency is nowhere more obvious that in the polar north, where there has been off-the-chart warming.

The global record was paced again by exceptional warmth in the northern hemisphere higher latitudes. Much of Alaska, into western and central Canada, as well as eastern Europe, Scandinavia and much of Russia were at least 4° above February averages, according to NASA.  NASA calculated February temperatures north of 75 degrees north latitude were over 6°C above average, reports Jon Eradman of weather.com. 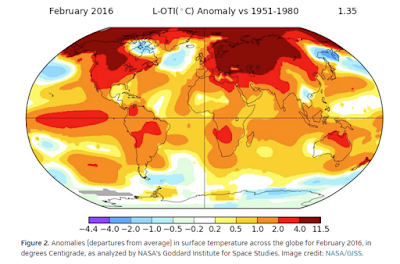 And as Jeff Masters and Bob Henson emphasise (below), February's heat is having severe impacts around the globe.

by Jeff Masters and Bob Henson

It has long been agreed upon in international climate negotiations that a 2°C warming of the Earth above modern pre-industrial levels represents a "dangerous" level of warming that the nations of the world should work diligently to avoid. The December 2015 Paris Climate Accord, signed by 195 nations, included language on this, and the Accord recommend that we should keep our planet from warming more than 1.5°C, if possible. Although the science of attributing extreme weather events to a warming climate is still evolving (more on this in an upcoming post), February 2016 gave us a number of extreme weather events that were made more probable by a warmer climate, giving us an excellent example of how a 2°C warming of the climate can potentially lead to dangerous impacts. And, as we have been repeatedly warned might likely be the case, these impacts came primarily in less developed nations--the ones with the least resources available to deal with dangerous climate change. 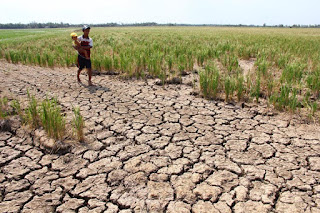 Vietnam has suffered $6.7 billion in damage from its 2016 drought, which has hit farmers especially hard in the crucial southern Mekong Delta. This cost is approximately 4% of Vietnam's GDP, and beats the $785 million cost (2009 USD) of Typhoon Ketsana of September 28, 2009 for most expensive disaster in their history. In this image, we see a boy holding his brother walking across a drought-hit rice field in Long Phu district, southern delta province of Soc Trang on March 2, 2016. Image credit: STR/AFP/Getty Images. 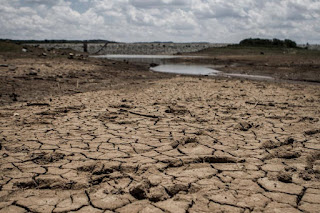 Zimbabwe has suffered $1.6 billion in damage from its 2016 drought. This is approximately 12% of their GDP, and beats the $200 million cost (2003 USD) of a February 2003 flood for most expensive disaster in their history. Zimbabwe's President Robert Mugabe on February 5, 2016 declared a 'state of disaster' in many rural areas hit by a severe drought, with more than a quarter of the population facing food shortages. This photo taken on February 7, 2016 shows the fast-drying catchment area of the Umzingwani dam in Matabeleland, Southwestern Zimbabwe. Image credit: Ziniyange Auntony/AFP/Getty Images 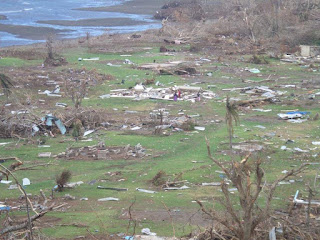 Fiji suffered $470 million in damage from Category 5 Cyclone Winston's impact in February. This is approximately 10% of their GDP. The previous costliest disaster in Fiji was Tropical Cyclone Kina in January 1993, at $182 million (2016 USD) in damage. In this image, we see how Category 5 winds can completely flatten human-built structures: Fiji's Koro Island received a direct hit from Winston when the storm was at peak strength with 185 mph winds. Image credit: My Fijian Images and Jah Ray.

One other severe impact from February's record heat is the on-going global coral bleaching episode, just the third such event in recorded history (1998 and 2010 were the others.) NOAA's Coral Reef Watch has placed portions of Australia's Great Barrier Reef under their "Alert Level 1", meaning that widespread coral bleaching capable of causing coral death is likely to occur. Widespread but minor bleaching has already been reported on the reef, and the coming month will be critical for determining whether or not the reef will experience its third major mass bleaching event on record.