A Paris view from the global South

by Joseph Purugganan, Focus on the Global South 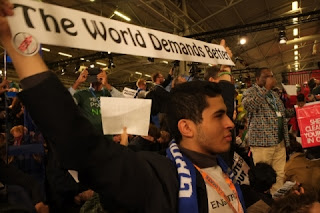 The Paris climate deal is out and as expected it is being hailed by proponents as a huge success. On the other hand, around 10,000 people joined the red line action at Arc de Triomphe and later at the Eiffel Tower protesting against corporate capture of the climate talks and the failure of governments to deliver a deal that addresses the root causes of climate change.

The #D12 protests, the first demonstrations in Paris since the November 13 attacks also sent a strong message to governments that the people are ready to act to push for real solutions to climate change; and for systems change.

We expect the battle of competing narratives to continue in the coming days.  Was Paris a success or a failure? Was the deal forged a good or a bad deal for people and planet? Should Paris be a starting point or a turning point?  Amid the celebratory mood, its important to take stock of what the red lines were:

We knew coming into COP21 that the aspect of emissions reduction was off the table in Paris. Instead what was to be included are the pledges contained in countries' Intended Nationally Determined Contributions (INDCs). We knew even before the talks began, based on reviews from the UNFCCC, UNEP and the Civil Society Review, that the pledges are inadequate to meet the target of limiting global emission levels to 42 billion tonnes in 2030, and will result in temperature rise of just under 3 degrees Celsius if the plans are fully implemented.

The coup de grace in Paris was the formation of the High Ambitions Group, a grouping of developed countries led by the United States and the European Union and developing countries like the Marshall Islands and the Philippines, pushing for "legally binding, ambitious and fair deal that would set out long-term targets reflecting current scientific knowledge about climate change." The group became the main platform (you can say the US effectively hid its agenda behind this group) for piercing through the principle of common but differentiated responsibility (CBDR), which became subordinated to the idea that  "all parties must share" in the load regardless of its historical emissions.

While the 1.5 degree limit had been the demand by developing countries and even NGOs, the push for ambition had two effects: it diverted attention away from the issue of CBDR which is an important justice indicator; and it gave the US in particular the platform to challenge the position of big emerging economies like India, who argued that it needed the space to push for its own development objectives (see India's position in Paris here).


Of course we want progress, of course we support the goal of 1.5 degrees, but we cannot fall into this trap. The so called high ambition proposed by the US-EU is ambition for corporations, not for addressing the root causes of the climate crisis. Many of us from the South are working with grassroots movements and communities to challenge extractive, destructive development and over consumption of the rich in our own societies.

The Delhi-based policy research group Center for Science and Environment did a fact check of the US plan and concluded:


Our report finds that their plan is nothing more than business as usual. Worse, all possible gains of increased efficiency in vehicles or energy use in buildings will be negated because of increased and growing consumption. This needs to be discussed because their lack of ambition means appropriation of the limited carbon budget.

There remains a reference to US$100 billion per year as floor of commitments with a promise to scale up after periodic reviews. The language remains weak and limited to commitment to "mobilize and facilitating the mobilization" of climate finance. There was a slight improvement in the final text when it comes to the issue of differentiation as the phrase "shared effort" was replaced with a more general "global effort" and the onus of providing climate finance is more clearly placed on developed countries.

Judged against the previous text, the final agreement on the surface shows an improvement. But what exactly do we need under climate finance? New Internationalist cited figures from International Energy Agency on the required amount of $1000 billion per year by 2020 to move towards the transformation to a fossil-free world. "Around two-thirds of this – so $670 billion – will need to be spent in developing nations, hence the need for a significant transfer of finance from North to South."  It says the commitment on climate finance "is inadequate and mean, especially given that governments spend an estimated $5,300 billion per year on direct and indirect subsidies to fossil fuels".

Loss and damage mechanism is part of the deal as a separate section (and not subsumed under Adaptation as proposed by developing countries). The problematic phrase "and in a manner that does not involve or provide a basis for liability or compensation nor prejudice existing rights under international law" was removed in the final text. It remains unclear however how the mechanism will work to compensate for losses and damages already felt by developing countries.

The deal also created a new mechanism contribute to the mitigation of greenhouse gas emissions and support sustainable development (the dual purpose of the old Clean Development Mechanism). The new mechanism will constitute "cooperative approaches that involve the use of internationally transferred mitigation outcomes towards nationally determined contributions." This mechanism, much like CDM, will provide the space carbon offsets which have been criticized as incentives for polluters and corporations (see Focus report Costly Dirty Money-Making Scheme).

The Paris outcome represents the culmination of a process that started in Copenhagen to change the course of the climate negotiations moving farther and farther away from the core principle of common but differentiated responsibility enshrined in the convention.  While there remains references to common but differentiated responsibilities and respective capabilities, in the light of different national circumstances throughout the text, the principle which was central to the climate justice debate seemed to have lost its significance in the wake of the voluntary, bottom-up regime of INDCs.

Another very clever move (which proponents see as innovation) is the idea of a global stock take; simply put a review process that is supposed to scale up the level of ambition to allow for a narrowing down of the emissions gap. Paris therefore is widely seen as a starting point or a foundation for more climate action in the future.

The climate justice movements have been re-energised by the events in Paris and have vowed to support the continuing struggles of grassroots and frontline communities and  intensify actions to push for real solutions.  The convergence of two big movements, on trade and climate, has also been strengthened here in Paris anchored primarily on challenging the notion that trade policies trump climate and making the links between struggles against new generation FTAs like TPP and TTIP and the corporate driven paradigm that exacerbate the climate crisis.