Implications of the Arctic permafrost thaw


by Ian Dunlop, cross-post from Club of Rome News

Of the many “Elephants in the Room” in the climate change debate, none are larger than the potential release to atmosphere of carbon dioxide (CO2) and methane contained in the Arctic permafrost. Preliminary findings from the latest research, discussed at the American Geophysical Union’s annual conference in San Francisco in December 2011, highlighted the extreme risks that humanity is now exposed to from global warming.
The Arctic has been warming 2-3 times faster than the global average, one consequence being that the volume of Arctic sea ice has reduced dramatically, by around 80% in summer since 1979, far faster than expected.  If current trends continue, the Arctic may be sea-ice-free in summer by around 2015, and all year by around 2030.  This would likely lead to further positive warming feedback as the ice albedo effect diminishes, accelerating melt of the Greenland ice sheet, ultimately contributing several metres of sea level rise.
Such warming would also accelerate thawing of the Arctic permafrost, which contains twice as much carbon as the atmosphere.  Releasing that carbon would accelerate global warming past tipping points which create a climate far less conducive to human evolution.  The permafrost, along with clathrates on the seabed, contain large quantities of methane, with a warming potential twenty-five-times greater than CO2.
CO2 and methane release in the Arctic has been observed for some time, but the latest findings suggest this may be accelerating rapidly.  The AGU discussion prompted a flurry of scientific commentary on the implications – whether the acceleration is real, whether the cause is anthropogenic or natural, whether the release mechanism might be abrupt or gradual.   It is too early to understand the full implications. The complete scientific analysis of the latest evidence will be available later this year, but the preliminary findings should be a wake-up call to us all. 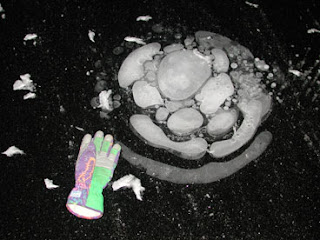 In risk management terms, these observations emphasise, as never before, the need for emergency action to reduce human carbon emissions.  If permafrost thawing is allowed to accelerate, we may have little means of stopping it.  Over time, this would be catastrophic, probably leading to global mean temperature increasing well over 4 degrees C compared to pre-industrial levels, with a global carrying capacity of 1 billion people rather than the current 7 billion.
Our inaction today may well be guaranteeing such an outcome, which is why emergency action is needed now.  This highlights the total inadequacy and empty rhetoric of the so-called “ Platform for Enhanced Action” agreed at the Durban UNFCCC Climate Conference last December.  Waiting to negotiate an agreement by 2015, for implementation from 2020, meaning it will have little effect for years afterwards, when human emissions are at an all-time high accelerating faster than ever, the permafrost thaw is most likely accelerating rapidly and none of the supposed technological fixes for human emissions, such as carbon capture and storage, are working, is nothing less than suicidal.

"Waiting to negotiate an agreement by 2015, for implementation from 2020, meaning it will have little effect for years afterwards, when human emissions are at an all-time high accelerating faster than ever, the permafrost thaw is most likely accelerating rapidly and none of the supposed technological fixes for human emissions, such as carbon capture and storage, are working, is nothing less than suicidal."

The critical flaw is our inability, or refusal, to address risk and uncertainty realistically.  The scientific community gives increasingly urgent warnings on the mounting evidence of anthropogenic warming and the need for rapid emission reductions. At the same time they rightly set out the uncertainties involved, but those uncertainties relate less to the fundamentals, far more to the impact of the warming (for example,  there is no doubt warming is occurring, the uncertainty is whether it will be a 4 degree C or a 7  degree C temperature increase).  Officialdom chooses to ignore these warnings, preferring policy based on “political realism”, shorthand for hoping the problem will go away.  Business, supposedly the experts on risk management, should take leadership, but have abrogated any responsibility, given that realistic action will require a fundamental redesign of the economic system, undermining established vested interests.  The result is that nobody is seriously addressing the strategic risks to which we are exposed.
Conventional politics is incapable of handling this issue. Leadership is totally lacking within the political and corporate worlds; global and national institutions are failing here, as they are failing to address the financial crisis – on both counts economic growth is the problem, not the solution.  The priority for 2012 must be to develop new mechanisms which, with community support, go around conventional politics and vested interests. Climate change is now a far bigger risk than any financial crisis and yet the real effort devoted to managing it is miniscule in comparison.


Ian Dunlop was formerly an international oil, gas and coal industry executive.  He chaired the Australian Coal Association in 1987-88, chaired the Australian Greenhouse Office Experts Group on Emissions Trading from 1998-2000 and was CEO of the Australian Institute of Company Directors from 1997-2001.  He is Chairman of Safe Climate Australia, a Member of the Club of Rome and Fellow of the Centre for Policy Development.