Having watched federal Labor take a battering at the polls over its climate backflips, the Victorian Labor Government has learned some lessons in preparing for the state poll of 27 November.

Labor is working hard to get on the front foot on climate, especially in preparing to defend a number of northern inner-city seats which on the results from relevant booths at the federal poll would either fall to the Greens (Melbourne, Richmond) or are line-ball (Northcote, Brunswick). Whilst the Greens as yet do not appear to have released an election-ready climate and energy policy, Labor is promoting its recent climate initiatives, exemplified by this current local newspaper advertisement, on-the-ground campaign material, and social media.

But how well does Labor stack up? Premier Brumby has made much of the government's climate bill, but the Victorian Government has also promised a $50 million subsidy for a new coal power station in Victoria, to be built by the company HRL-Dual Gas. The project is currently seeking EPA approval. It will increase Victoria’s greenhouse gas emissions by up to 4.2 million tonnes each year.

That's the same amount that emissions will be cut with Premier Brumby's plan to close one-quarter of Hazelwood power station. That's a dirty trick, saying you will close a small part of one coal power station because you care about the climate, then handing over taxpayers' money to build a new one!

Hazelwood was due to close in 2009, but instead the state Labor government extended its life past 2030. It is an industrial dinosaur and the dirtiest coal-fired power station in Australia.

Victoria’s brown-coal emissions have increased 10% in the last 10 years, and new, dirty brown coal reserves have been handed over to industry. Deals have been signed to dig up and export more brown coal.

And in the post below, Climate Action Moreland looks back at past promies by the Victorian government in climate, and finds them wanting. This post first published here.

Taking action one report at a time

The Brumby government recently released its Climate Change White Paper, The Action Plan, to much fanfare and praise. Media outlets lauded the plan with headlines like “Brumby lays down gauntlet on carbon” and “Premier’s bold plan on climate takes lead”. Yet those with long memories may well remember another Victorian labor climate announcement that was also the toast of the town.

Back in June 2002 the Bracks government unveiled its Victorian Greenhouse Strategy (VGS). Media releases of the time promised that the strategy would “reduce Victoria’s greenhouse gas emissions by five to eight million tonnes by 2010”. It would “position Victoria to prosper in a future carbon constrained economy” and “a number of drivers are now in place that will lead to an increased take-up… in the renewable energy sector over the next decade”. 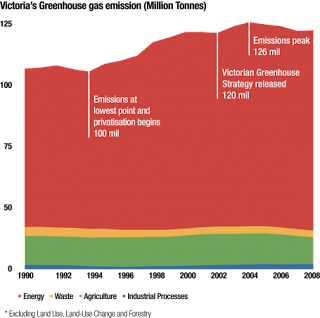 In 2002 our total emissions were 120.5 million tonnes (Mt). The most recent data from the government shows in 2008 that the State’s emissions were 119 Mt and in 2006 were at an all time high of 126 Mt. That’s a long way from the promises laid down in the VGS. To be fair to the government there has been a reduction of 1.4 Mt when comparing the years 2002 and 2008 (if you include the government’s dubious accounting of reforestation i.e. Land Use, Land-Use Change and Forestry, LULUCF). But when you compare our most recent emissions with the base year for Kyoto’s figures, 1990, our emissions have actually increased 12.4 Mt even when you account for LULUCF.

Where are the emissions coming from?

While emissions from industry, waste and agriculture have pretty much remained steady over the past two decades – emissions from the energy sector have been rampant. Fuel combustion (mainly Public Electricity and Heat Production) rose from 77 Mt in 1990 to 100.8 Mt in 2008. An increase of 24 Mt in a sector that now makes up 82% of Victoria’s emissions 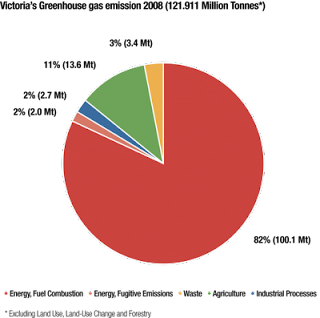 It’s Deja Vu all over again

The white paper was the precursor to the Brumby government’s Climate Change Bill. Passing a climate bill, especially the first of its kind in Australia, is a significant moment and the importance of it should not be underplayed. It’s just a shame that there is so little in the Bill that will actually see emissions reduced. A large portion of it is dedicated to ‘Forestry Rights’ and ‘Carbon Sequestration Agreements’.
It appears that the government is planning to continue business as usual and continue to hide the State’s emissions in dodgy carbon accounting. There was little in the Bill that will pave the way for green jobs required for the transition to the zero carbon economy that is required. It said nothing about assisting inefficient power stations close and nothing about helping communities, like those in the Latrobe Valley, move to those green jobs that our governments so love to tell us about.

Being unsure what my eyes were not showing me I emailed Gavin Jennings, the State Environment Minister for clarification on his government’s non-plan to reduce emissions. Three weeks later I am still waiting for a reply.

The future is now

It’s now 2010 and Victoria’s emissions have not been reduced by five million tonnes annually. There has not been the government backed boom in renewables. This is despite the obvious demand in government environment programs like greenloans, insulation and solar rebates. They all took the Federal government by surprise. The public’s desire to take action out stripped the budget allocation in every case.

If you compare Victoria’s past policies with a country that has been at the forefront of the environmental movement it is easy to see where Labor has gone wrong. Germany has reduced it’s emissions by 23.3%, which is the lowest they have been since 1990. How did they do it, Prof Dr Andreas Troge, President of the Federal Environment Agency says “The main reason for lower CO2 emissions was decreasing demand for hard coal and lignite [Brown Coal]. At the same time, there was a rise in the use of lower-emission energy sources.”