These myths are so deeply ingrained in the mainstream media that such messaging, when it is tried, is routinely attacked and denounced — and the flimsiest studies are interpreted exactly backwards to drive the erroneous message home (see “Dire straits: Media blows the story of UC Berkeley study on climate messaging“) 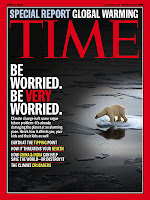 The only time anything approximating this kind of messaging — not “doomsday” but what I’d call blunt, science-based messaging that also makes clear the problem is solvable — was in 2006 and 2007 with the release of An Inconvenient Truth (and the 4 assessment reports of the Intergovernmental Panel on Climate Change and media coverage like the April 2006 cover of Time). The data suggest that strategy measurably moved the public to become more concerned about the threat posed by global warming (see major study here).

You’d think it would be pretty obvious that the public is not going to be concerned about an issue unless one explains why they should be concerned about an issue. And the social science literature, including the vast literature on advertising and marketing, could not be clearer that only repeated messages have any chance of sinking in and moving the needle, as I discuss in my book “Language Intelligence: Lessons on Persuasion from Jesus, Shakespeare, Lincoln, and Lady Gaga.” One of the most popular quotes in the book is from GOP wordmeister Frank Luntz:

Because I doubt any serious movement of public opinion or mobilization of political action could possibly occur until these myths are shattered, I’ve been posting on the best work on climate messaging and public opinion analysis (see “Must-Read: A Guide For Engaging and Winning on Climate And Clean Energy” and Krosnick: Candidates “May Actually Enhance Turnout As Well As Attract Voters Over To Their Side By Discussing Climate Change“).

Since this is Oscar night, though, it seems appropriate to update my post on what messages the public are exposed to in popular culture and the media. It ain’t doomsday. Quite the reverse, climate change has been mostly an invisible issue for several years and the message of conspicuous consumption and business-as-usual reigns supreme.

The motivation for this post actually came up last year because I received an e-mail from a journalist commenting that the “constant repetition of doomsday messages” doesn’t work as a messaging strategy. I had to demur, for the reasons noted above.

But it did get me thinking about what messages the public are exposed to, especially as I’ve been rushing to see the movies nominated for Best Picture this year. I am a huge movie buff, but as parents of small children know, it isn’t easy to stay up with the latest movies.
That said, good luck finding a popular movie in recent years that even touches on climate change, let alone one a popular one that would pass for doomsday messaging. Last year, Best Picture nominee The Tree of Life was been billed as an environmental movie — and even shown at environmental film festivals — but while it is certainly depressing, climate-related it ain’t. In fact, if that is truly someone’s idea of environmental movie, count me out.

This year Beasts of the Southern Wild is an environmentally-themed movie that has won its share of awards and is nominated for Best Picture. It is seemingly related to climate change. But it hardly counts as a popular movie, scoring a whopping $12 million in domestic gross to date, which means it was seen by somewhere north of one million Americans.

The closest to a genuine popular climate movie was the dreadfully unscientific The Day After Tomorrow, which is from 2004 (and arguably set back the messaging effort by putting the absurd “global cooling” notion in people’s heads!) Even Avatar, the most successful movie of all time — $2.7 billion global gross — and “the most epic piece of environmental advocacy ever captured on celluloid,” as one producer put it, omits the climate doomsday message. One of my favorite eco-movies, “Wall-E, is an eco-dystopian gem and an anti-consumption movie,” but it isn’t a climate movie.

I had some hopes for The Hunger Games movie. I’d read all 3 of the bestselling young adult novels — hey, that’s my job! — and while post-apocalyptic, they don’t qualify as climate change doomsday messaging. And the movie has nothing to do with global warming. So, no, the movies certainly don’t expose the public to constant doomsday messages on climate.

Here are the key points about what repeated messages the American public is exposed to:
If you want to find anything approximating even modest, blunt, science-based messaging built around the scientific literature, interviews with actual climate scientists and a clear statement that we can solve this problem — well, you’ve all found it, of course, but the only people who see it are those who go looking for it.

Of course, this blog is not even aimed at the general public. Probably 99% of Americans haven’t even seen one of my headlines and 99.7% haven’t read one of my climate science posts. And Climate Progress is probably the most widely read, quoted, reposted, liked and retweeted, climate science blog in the world.

Anyone dropping into America from another country or another planet who started following popular culture and the news the way the overwhelming majority of Americans do would — at least until Superstorm Sandy — have gotten the distinct impression that nobody who matters is terribly worried about climate change. And, of course, they’d be right — see “The failed presidency of Barack Obama, Part 2.”

It is total BS that somehow the American public has been scared and overwhelmed by repeated doomsday messaging into some sort of climate fatigue. The public’s concern did seem to drop several percent — but that is primarily due to the conservative media’s disinformation campaign impact on Tea Party conservatives and to the treatment of this as a nonissue by most of the rest of the media, intelligentsia and popular culture.

Ironically it took the post-apocalyptic horror of an actual warming-fueled superstorm to bring home the message that global warming is here and now.

What’s amazing to me is not the public’s supposed lack of concerned about global warming — another myth, debunked here — but that the public is as knowledgable and concerned as it is given the realities discussed above!

The stunning increase in extreme weather events — 25 disasters exceeding a billion dollars in the past two years — which had long been predicted by climate scientists, has not gone unnoticed by the public:
So the question now is whether the media, politicians, and popular culture will finally catch up to where the public is: