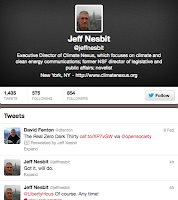 Jeff Nesbitt (@jeffnesbit), the Executive Director of Climate Nexus, shows how powerful a tool Twitter can be in communicating the global warming story.
Here's how it started. Nesbitt had tweeted:


Record snow in a warming world? The climate science is clear.bit.ly/WXOLUB


@jeffnesbit Dude. Weather is complex. Climate has never been stable. Can you name a more random set of data? davidhousholder.com


What did Nesbitt did next is really compelling. He told the real climate story in 140 character (the size limit for the Twitter uninitiated) bursts:


@LibertyHous Yes, weather is complex. So is God. Scientists, and theologians, study complex sets of data in order to understand patterns.

@LibertyHous Pattern #8. The number of dry areas in the world doubled in the last 50 years due to climate change. http://bit.ly/GTyGeC

@LibertyHous Pattern #9. Total number of floods (due to more climate-driven precipitation) has tripled in 15 years. http://bit.ly/WPee4x

@LibertyHous Pattern #10. Record high temperatures in the U.S. are now twice that of record lows. http://bit.ly/LfM0hv

@LibertyHous Pattern #12. The number of climate-driven natural catastrophes has doubled in the past 30 years. http://buswk.co/PIUNuI

@LibertyHous Pattern #14. Rate of global sea level rise in past decade double that of the past century. http://1.usa.gov/14LkaiE