2000 people attended an inspiring two-day National Climate Emergency Summit in Melbourne on 14-15 February. Here is my contribution to the opening plenary, "The New Climate Reality Check”, a session I shared with Michael E. Mann and facilitated by Jo Chandler.

Since mid-2018, understanding of the climate emergency has exploded globally. Everybody is talking about it. The Oxford Dictionary named “climate emergency” as its Word of the Year for 2019, and more than 1100 national, regional and local governments in 25 countries have declared a climate emergency.

Understanding of the emergency and the existential risks have been driven by many factors, including: the local government campaigns; Greta Thunberg’s brutally direct language and the StudentStrike4Climate movement; and the advocacy of The Climate Mobilisation in the US and Extinction Rebellion; and campaigns such as those for a Green New Deal.

New Australia Institute research finds a clear majority of Australians agree the nation “is facing a climate emergency” requiring emergency action and, in response, governments should “mobilise all of society” like they did during the world wars.

Turning recognition of the climate emergency into an emergency plan and mobilisation around the world is the only strategy that matches ambition to the scale of the problem. But what does this phrase “climate emergency” mean?

In 2008, Philip Sutton and I deployed the phrase in a book: Climate Code Red: the case for emergency action. As we described it the book, at emergency response is one in which:
Australia’s Prof. Will Steffen says  climate should be “the primary target of policy and economics” with something “more like wartime footing” to roll out the transformation “at very fast rates”.

The first duty of a government is to protect or safeguard the people, their livelihoods, their well-being, safety and way of life.

But what does protection mean when it comes to climate disruption? Should we aim to protect all people, or just some?   All of nature, or just some? I do not see how we can adopt climate goals which would mean ecosystems are destroyed, species become extinct, and there is significant disruption to human society. 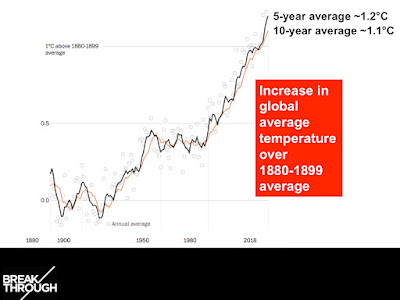 This idea is important because at just 1.2°C of global average warming so far, climate change is already dangerous:. Here are five examples:
So 1.5°C is not a safe or reasonable goal. In the longer run, sea-levels rise 10-20 metres for each one degree rise.

That’s why as well as eliminating fossil fuel emissions, carbon drawdown is vital to help reduce greenhouse gas levels and cool the temperature back to a safe level. 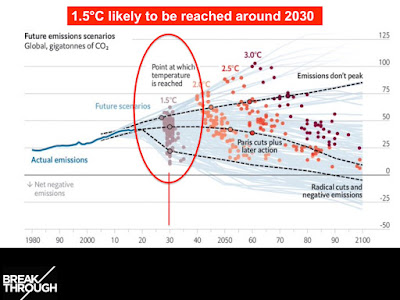 But we have a short-run problem.  1.5°C is just a decade away, a consequence of past emissions.  and there is no carbon budget for 1.5°C.  Nothing in the short-term bar geo-engineering — the use of sulfates to provide some temporary atmospheric cooling  —  will keep us under 1.5°C. But such approaches have not yet been demonstrated to be of net environmental or social benefit.

So this is one line of evidence for climate emergency: 1.5°C is dangerous, and close at hand, and very difficult to avoid.

A second line of evidence comes from our climate history. The last time atmospheric carbon dioxide emissions were at the current level was during the early-to-mid Pliocene 3–4 million years ago, when temperatures were around 3°C warmer than the late 19th century, and sea levels were around 25 metres higher.

A third line of evidence comes from the 2015 Paris agreement.  If the current commitments by nations to reduce their emissions are not greatly improved, we face catastrophic warming of 3°C within a lifetime and up to 5°C by century’s end, according to the World Meteorological Organisation.

But scientists say warming of 4°C is incompatible with an organised global community, is devastating to the majority of ecosystems, and has a high probability of not being stable. National security analysts say that at 3°C the international order between nations may break down into “outright chaos”.

And here is why: 3°C threatens to make large parts of the world and food-growing lands uninhabitable. This includes regions ruined by drought and desertification, areas too hot to live in year-round, and rising seas.

A fourth line of evidence is the proximity or more tipping points, that is, the passing of critical thresholds which result in step changes in the climate system that are irreversible on human timescales without herculean human interventions.

As one example, that recent Nature paper pointed to “biosphere tipping points which can trigger abrupt carbon release back to the atmosphere.. Permafrost across the Arctic is beginning to irreversibly thaw and release carbon dioxide and methane… the boreal forest in the subarctic is increasingly vulnerable.”  They say that “Other tipping points could be triggered at low levels of global warming… a cluster of abrupt shifts between 1.5°C and 2°C…”. And remember 1.5°C is just a decade away. 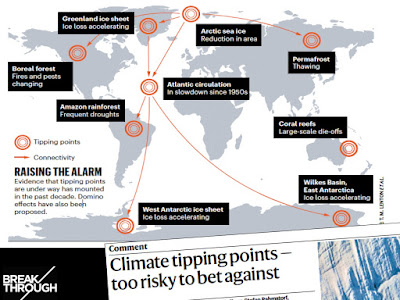 A fifth line of evidence, along a similar path: Scientists also describe a “hothouse Earth” scenario, in which system feedbacks and their mutual interaction drive the Earth’s climate to a “point of no return”, so that further warming becomes self-sustaining.This “hothouse Earth” planetary threshold could exist at a temperature rise as low as 2°C, possibly even lower.

And yet to stay below 2°C, itself far from safe, global emissions would have to more than cut in half in the next ten years, and much more in the high-emitting rich nations like Australia. Those decarbonisation rates alone — of 5-10% of the total economy every year for ten years — are unprecedented in economic history and reveal the climate emergency requires unprecedented action.

In summary, climate disruption is now an existential threat to societies as we know them today. This is an emergency because it requires all hands on deck, making climate the first priority of economics and politics,  because winning slowly is now the same as losing.

Greta Thunberg says this: “This is above all an emergency, and not just any emergency. This is the biggest crisis humanity has ever faced. This is not something you can like on Facebook.”

Prof John  Schellnhuber, the emeritus director of the Potsdam Institute and advisor to Pope Francis and German Chancellor Merkel says we are in a deep state of climate emergency: “If we don’t solve the climate crisis, we can forget about the rest.” And: “If we continue down the present path “there is a very big risk that we will just end our civilisation. The human species will survive somehow but we will destroy almost everything we have built up over the last two thousand years.” 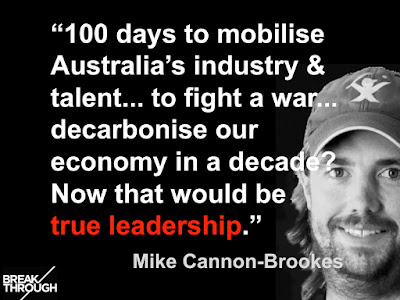 Mike Cannon-Brookes, the co-founder and co-CEO of Atlassian says “100 days to mobilise Australia’s industry and talent... to fight a war... and decarbonise our economy in a decade? Now that would be true leadership”.

We have the economic capacity to address the climate crisis. We have many of the solutions already and we are good at research that can solve outstanding issues. It is not primarily an economic or technological issue, but a political and social one.