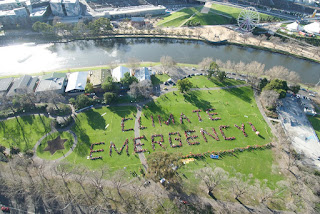 The findings are part of a larger survey which found majority support, and across the political parties, for a rapid transition to 100% renewable energy, a national program to switch to an electrically charged transport system, stopping any more native forest logging, and a large publicly-funded research program into zero-carbon industry and agriculture (See Table 1).  There was also more support than opposition for no new coal mines and no new exploration for new deposits of coal, oil or gas, but a clearer divide between the two political sides on these two issues. 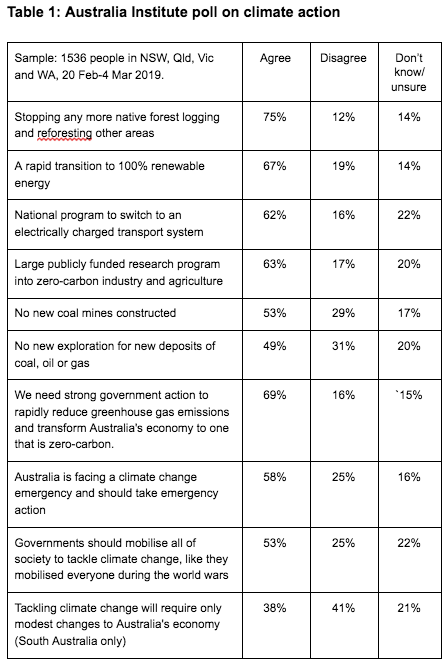 The research sample was 1536 people across four states: Queensland, NSW, Victoria and WA.

It was released as the ABC’s Vote Compass found that the environment (including climate change) is rated as the number one issue by 29 per cent of respondents in this federal election, a “massive shift” from just 9 per cent in 2016. The environment was nominated as the top concern among undecided voters.

Growing public concern about climate issues was also picked up in the annual Lowy Institute Poll on Australian attitudes released in June 2018, and in the TAI 2018 Climate of the Nation report.

The new TAI poll found that all statements in support of taking ambitious action on climate change received majority agreement, and all statements opposing ambition on climate change received majority disagreement. TAI says: “Results show support for a wide range of ambitious climate policies and broad agreement that climate change is serious and can and should be addressed. What’s more, the support is present across Australia, rather than being focused in particular states.” Amongst the results:
But the biggest news is that almost six in 10 respondents agreed that “Australia is facing a climate change emergency and should take emergency action”, and over half agreed that governments should “mobilise all of society to tackle climate change, like they mobilised everyone during the world wars”.

On these two questions, every political party had more support than opposition (see Table 2). TAI notes that “It is especially significant that many respondents disagreed only modest changes are needed, but still supported these required changes. 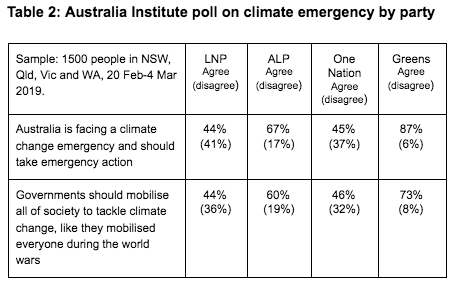 This shows a good understanding that the fast transition now required will be disruptive and cause some pain, but people accept that is reasonable because a climate emergency level of economic mobilisation is now necessary.

A number of factors have probably contributed to these findings of high levels of understanding of the growing climate emergency, including: the sustained drought and year of extraordinary climate extremes in Australia; the slow death of the Great Barrier Reef; the more direct language employed by the likes of  Greta Thunberg, the school students strikers, Extinction Rebellion in the UK, and authors such as David Wallace-Wells over the last year; the growing climate emergency declarations by local governments in Australia and elsewhere; and the campaign to make this the “climate election”.