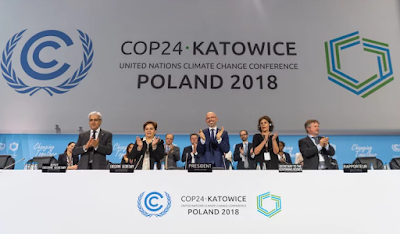 This cognitive dissonance was on full display at the UN Framework Convention on Climate Change (UNFCCC) twenty-fourth meeting of the Conference of the Parties (COP24) in Katowice, Poland, last December. Speaking at COP24 to great fanfare and a standing ovation, Greta Thunberg, the 16-year old Swedish climate activist who has inspired a global movement for “climate strikes” by school students, called out the leadership failure of the COP adults who “are not mature enough to tell it like is”:


We have to speak clearly, no matter how uncomfortable that may be. You only speak of green eternal economic growth (and) about moving forward with the same bad ideas that got us into this mess, even when the only sensible thing to do is pull the emergency brake. You are not mature enough to tell it like is. Even that burden you leave to us children.

And then the adults got down to business, which was to write a rulebook for the Paris Agreement. The result does little to push nations to improve on the low ambition of the 2015 COP, and instead simply restates a request for nations to update their commitments by 2020.

The Paris deal established “bottom up”, voluntary, unenforceable, national emission-reduction commitments that would result in a warming path of 3.5°C, and closer to 5°C when the full range of climate-system feedbacks is taken into account. Such an outcome, say scientists, is inconsistent with the maintenance of human civilisation, and may reduce the human population to one billion people. Even the World Bank says it may be beyond adaptation.

In a foreword to the recent report What Lies Beneath: The Underestimation of Existential Climate Risk, eminent scientist and emeritus director of the Potsdam Institute John Schellnhuber warned that “climate change is now reaching the end-game, where very soon humanity must choose between taking unprecedented action, or accepting that it has been left too late and bear the consequences”.
In a recent interview, Schellnhuber said that if we continue down the present path “there is a very big risk that we will just end our civilisation. The human species will survive somehow but we will destroy almost everything we have built up over the last two thousand years”.

Since the UNFCCC was established at the Rio Earth Summit in 1992, annual human carbon-dioxide (CO2) emissions have increased more than 50 per cent, and there is no sign of their growth slowing. Since 1992, warming has risen from 0.6°C to 1.1°C, and the rate of warming is now accelerating, with Earth likely to hit the lower range of the Paris goal of 1.5°C within a decade or so. Evidence from Earth’s climate history suggests that the present CO2 level would raise sea levels by many tens of metres and the temperature by around a civilisation-ending 3.5°C in the longer term.

The UNFCCC strives “to enable economic development to proceed in a sustainable manner”, but every year humanity’s ecological footprint becomes larger and less sustainable. Humanity now requires the biophysical capacity of 1.7 Earths annually as it rapidly chews up natural capital.
A fast, emergency-scale transition to a post–fossil fuel world is absolutely necessary to address climate change. But policymakers exclude emergency action from consideration because it is seen as too economically disruptive.

Two good examples of this mindset are found in the initial reports to their governments by Nicholas Stern (UK in 2006) and Ross Garnaut (Australia in 2008), in which they canvassed the 450 parts per million (ppm) and the 550 ppm CO2 targets. The figure of 550 ppm represents around 3°C of warming before carbon-cycle feedbacks are considered, and would be truly devastating for people and nature. While both Stern and Garnaut concluded that 450 ppm—around 2°C of warming without longer-term system feedbacks—would inflict significantly less damage, they nevertheless advocated that government start with the 550 ppm figure because they considered that the lower goal would be too economically disruptive. They have since acknowledged that evidence of accelerating climate impacts has rendered this approach dangerously complacent.

The UNFCCC orthodoxy is that there is time for an orderly economic transition within the current neoliberal paradigm, and so emphasis is placed on cost-optimal paths, which are narrowly defined. Policymakers increasingly rely on integrated assessment models (IAMs) that claim to provide economically efficient policy options, but their modelling of the physical science excludes materially relevant processes such as permafrost melting, and they systematically underestimate the cost and scope of future climate impacts.

Policymakers also favour commodifying carbon pollution and creating a vast market for the capture and underground storage of CO2, an unproven technology at scale but one that would create a boom for oil and gas producers. Unrealistic assumptions about untested solutions become an excuse for delaying strong action.

Policymakers, in their magical thinking, imagine a mitigation path of gradual change to be constructed over many decades in a growing, prosperous world. The world not imagined is the one that now exists: of looming financial instability; of a global crisis of political legitimacy; of climate-system non-linearities; and of a sustainability crisis that extends far beyond climate change to include all the fundamentals of human existence and most significant planetary boundaries (soils, potable water, oceans, the atmosphere, biodiversity, and so on).

The Paris Agreement is almost devoid of substantive language on the cause of human-induced climate change and contains no reference to “coal”, “oil”, “fracking”, “shale oil”, “fossil fuel” or “carbon dioxide”, nor to the words “zero”, “ban”, “prohibit” or “stop”. By way of comparison, the term “adaptation” occurs more than eighty times in thirty-one pages, though responsibility for forcing others to adapt is not mentioned, and both liability and compensation are explicitly excluded. The agreement has a goal but no firm action plan, and bureaucratic jargon abounds; the terms “enhance” and “capacity” appear more than fifty times each.

In a way, none of this should be surprising given the UNFCCC’s structure. The COPs are political fora, populated by professional diplomatic representatives of national governments, and subject to the diplomatic processes of negotiation, trade-offs and deals. The decision-making is inclusive (by consensus), making outcomes hostage to national interests and lowest-common-denominator politics.
This was again evident in Poland, where, in a deadly diplomatic strike, four big oil and gas producers—Saudi Arabia, the United States, Kuwait and Russia—blocked wording to welcome a scientific report on the 1.5°C target, which the COP had commissioned three years earlier in Paris. Such behaviour is a hallmark of COP meetings.

Discussion of what would be safe––less warming than we presently experience––is non-existent. If climate change is already dangerous, then by setting the 1.5°C to 2°C target, the UNFCCC process has abandoned its key goal of preventing “dangerous anthropogenic influence with the climate system”.

Moral hazard permeates official thinking, in that there is an incentive to ignore risk in the interests of political expediency. And so we have a policy failure of epic proportions.

The failure to appreciate and act to avoid the existential risk is in part due to the way climate-science knowledge is produced. The bulk of climate research has tended to underplay the existential risks, and has exhibited a preference for conservative projections and scholarly reticence, although increasing numbers of scientists—including Kevin Anderson, James Hansen, Michael E. Mann, Michael Oppenheimer, Naomi Oreskes, Stefan Rahmstorf, Eric Rignot and Will Steffen—have spoken out in recent years on the dangers of such an approach.

One study examined a number of past predictions made by climate scientists and found them to have been “conservative in their projections of the impacts of climate change” and that “at least some of the key attributes of global warming from increased atmospheric greenhouse gases have been under-predicted, particularly in Intergovernmental Panel on Climate Change (IPCC) assessments of the physical science”. The authors concluded that climate scientists are not biased toward alarmism but rather the reverse of “erring on the side of least drama, whose causes may include adherence to the scientific norms of restraint, objectivity, skepticism, rationality, dispassion, and moderation”. This may cause scientists “to underpredict or downplay future climate changes”.

This tallies with Garnaut’s reflections on his experience in presenting two climate reports to the Australian government. Garnaut questioned whether climate research had a conservative “systematic bias” due to “scholarly reticence”, and observed that in the climate field this has been associated with “understatement of the risks”.
When dealing with existential climate risks, Schellnhuber has pointed to the limitations of methods that focus on risk and probability analyses that often exclude the outlier (lower-probability, high-impact) events and possibilities:


Experts tend to establish a peer world-view which becomes ever more rigid and focussed. Yet the crucial insights regarding the issue in question may lurk at the fringes. This is particularly true when the issue is the very survival of our civilisation, where conventional means of analysis may become useless.

He has pointed to a “probability obsession” in which scientists have tried to capture the complex, stochastic behaviour of an object by repeating the same experiment on that object many, many times:
“We must never forget that we are in a unique situation with no precise historic analogue. The level of greenhouse gases in the atmosphere is now greater, and the Earth warmer, than human beings have ever experienced. And there are almost eight billion of us now living on this planet. So calculating probabilities makes little sense in the most critical instances, such as the methane-release dynamics in thawing permafrost areas or the potential failing of entire states in the climate crisis. Rather, we should identify possibilities, that is, potential developments in the planetary make-up that are consistent with the…conditions, the processes and the drivers we know.”

Kevin Anderson of the University of Manchester says there is “an endemic bias prevalent amongst many of those building emission scenarios to underplay the scale of the 2°C challenge. In several respects, the modelling community is actually self-censoring its research to conform to the dominant political and economic paradigm”.

A good example is the 1.5°C goal agreed to at the Paris December 2015 climate-policy conference. IPCC assessment reports until that time (and in conformity with the dominant policy paradigm) had not devoted any significant attention to 1.5°C emission-reduction scenarios or 1.5°C impacts, and the Paris delegates had to request the IPCC to do so as a matter of urgency. This is a clear case of the policy tail wagging the science-research dog.


This article was first published by Arena Magazine.