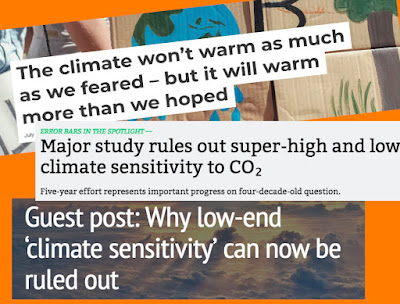 Reading the media reporting of a new scientific paper released on 22 July, it was easy to get the impression that some “worse-case” climate warming possibilities are now off the agenda. “So this is good news?” a friend emailed. “No” was my answer.

It would be a grave mistake, and an illustration of how media reporting can get complex climate stories wrong, to find good news in this research.


The research in question is “An assessment of Earth’s climate sensitivity using multiple lines of evidence”. Climate sensitivity is the amount of warming to be expected from a doubling of the amount of carbon dioxide in the atmosphere. The most recent Intergovernmental Panel on Climate Change (IPCC) report found the range was 1.5 to 4.5 degrees Celsius (°C).


One major finding was that very low estimates of climate sensitivity of less than 2°C — which climate sceptics like to emphasise — are inconsistent with the evidence. The Washington Post headlined with “Major new climate study rules out less severe global warming scenarios”, reporting that the research “found that Earth’s global average temperature will most likely increase between 2.3 and 4.5°C” compared to the IPCC range of 1.5-4.5°C. And it reported that there “would be a 6 to 18 percent chance of exceeding the upper bound defined by the study 4.5°C.” Which was balanced reporting.

Other coverage gave emphasis to the claim that some high-end estimates might now be off the table. But if the IPCC range was up 4.5°C, and the new paper range is up 4.5°C, what has changed that is “good news”?  Some research papers over the last two years, reporting on preliminary results from updated climate models for the next IPCC report, had suggested that climate sensitivity could be much higher, due to unresolved issues with cloud feedbacks. But scientists such as NASA’S Gavin Schmidt had warned that this work-in-progess should be taken with a grain of salt: “claims that climate sensitivity is much higher, or that worst cases scenarios need to be revised upwards, are premature”.  His warning was prescient.

And Science Daily reported one of the paper's authors, Gabi Hegerl, saying that “these estimates make it improbable that climate sensitivity is at the low end of the IPCC range and confirm the upper range” (emphasis added).

Even though the new paper had found the upper bound of 4.5°C was the same as that of the IPCC report, media reporting included:
The impression across this reporting was that some of the more high-end warming estimates are now off the table. So should we be comforted that “our findings also suggest that very high ECS estimates are unlikely” or that “the climate won’t warm as much as we feared”?

What none of the media reports said — as far as I can ascertain — is that this new study is only about short-term warming, not the “slow” warming where the full impacts of climate change on ice sheets and carbon stores are taken into account. And that leads to a very different story.

Climate sensitivity is generally understood as the temperature rise subsequent to a doubling of the level of carbon dioxide (CO2), once the planetary system has returned to equilibrium (balance); that is, once all the perturbations caused by the increase in trapped energy have worked their way through the system, including hotter atmosphere and oceans, melting ice sheets, changed vegetation and so on. Whilst some of the impacts are fast and can be observed on short to decadal timeframes (atmospheric warming, changes to clouds, increased water vapour), others such as the melting of the polar ice sheets or large-scale loss of frozen carbon stores (permafrost) are more relevant on century to millenia timeframes. These “slow” feedbacks (self-reinforcing loops) can take many human generations in time to manifest.

IPCC reports have focused on what is generally called Equilibrium Climate Sensitivity (ECS).  The 2007 IPCC report gave a best estimate of climate sensitivity of 3°C and says it “is likely to be in the range 2°C to 4.5°C”. The 2014 report said that “no best estimate for equilibrium climate sensitivity can now be given because of a lack of agreement on values across assessed lines of evidence and studies” and only gives a range of 1.5°C to 4.5°C.

What the IPCC reports failed to make clear is that the ECS measure omits key "slow" feedbacks that a rise in the planet's temperature can trigger. These include the permafrost feedback and other changes in the carbon cycle which can release large amounts of greenhouse gases to the atmosphere, a decrease in the ocean's carbon-sink efficiency, and the melting of polar ice sheets and hence changes in the Earth's reflectivity.


Climate sensitivity which includes these feedbacks  — known as Earth System Sensitivity (ESS) — does not appear to be acknowledged in the 2014 IPCC report at all. Yet, there is a wide range of literature which suggest an ESS of 5–6°C, for example by the Geological Society and a lifetime of work by former NASA climate science chief James Hansen and his co-researchers, including "Climate sensitivity, sea level and atmospheric carbon dioxide". 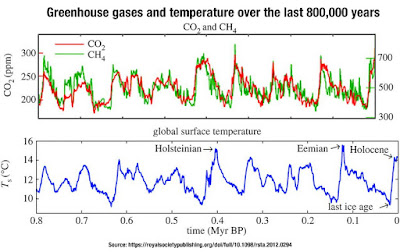 The long-term (slow feedbacks) or Earth System Sensitivity can be inferred from the paleoclimate record. Over the last million years, the Earth’s climate has see-sawed between atmospheric CO2 of around 180 parts per million (ppm) in glacial periods and 300 ppm CO2 during interglacial or warm periods (see illustration, drawn from the Hansen et al paper referenced above). This is an increase in CO2 levels of around 65%, that is, less than a doubling.  Yet during such periods, the temperature see-sawed by up to 5°C. Now, there are some other factors to take into account that have an influence in triggering this process, principally changes in Earth’s orbit (Milankovitch cycles). Nevertheless there is a wide range of recent literature that points to ESS of around 5-6°C, such as “Well below 2C: Mitigation strategies for avoiding dangerous to catastrophic climate changes”.

So what does all this mean?
And that is a story that the media coverage of this important new paper failed to tell.