“We would never board a plane if we only arrive in half the cases, but this is the method in international climate policymaking” 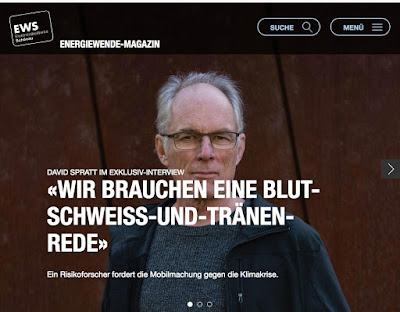 Introduction: The energy transformation in Germany, widely known as the Energiewende, is the country’s planned transition to a low-carbon, nuclear-free economy.  It is a national government strategy and implementation process, and an associated magazine Energiewende Magazin. The following interview for Energiewende is online. Below is a translation. The interview will appear in the next issue of Energiewende Magazin.  The content relates to the Breakthrough What Lies Beneath report and the recent three-degree security, risk and climate scenario papers. They will be the cover story.  It is a sign of a changing perceptions that a primary communication tool of the German government’s climate/energy transition strategy is featuring a strong critique of UN climate policy-making processes, existential risk and IPCC reticence.
We need a blood-sweat-and-tears speech


First published in German at Energiewende.

The risk researcher David Spratt in conversation with Christian Mihatsch.

Climate change impacts will be larger than commonly thought, for there is a high probability that the climate will react to continuing  emissions with a four- or five-degree Celsius jump in temperature. If humanity follows the recommendations of the Intergovernmental Panel on Climate Change (IPCC), it can only limit global warming to 1.5 degrees Celsius with a 50% chance of success. And lurking under two degrees of warming are tipping points, from which further heating could not be stopped. The IPCC entrusts the survival of human civilization to the outcome of a coin toss. For David Spratt, of the Australian think tank Breakthrough - National Center for Climate Restoration, that is too risky. Instead, he calls for a mobilization of society as a whole — as in a war.

Mr. Spratt, what is the problem with the reports of the IPCC? 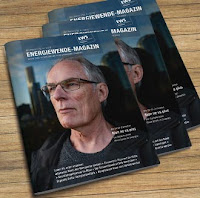 The IPCC is too model dependent, that's the main problem. Some elements of the climate system are linear and can be well predicted. But there are many non-linear events — tipping points where the system goes from one state to another. These can only be modelled poorly. And we often do not know that we have crossed such a point until after it has happened. The laws of physics are not interested in our forecasts —  and even below two degrees could be tipping points from which global warming itself increases further. These feedback processes of the climate system are also difficult to model. For example, the IPCC does not consider enough the climate consequences of thawing permafrost soils. As a result, negotiators in the UN climate talks depend on IPCC reports that do not convey a correct view of the future.

You also criticize the IPCC approach to risk management.

Risk is calculated as a probability multiplied by the damages. But talking about three or four degrees of warming, the damage is overwhelming. In a four-degree scenario, billions of people will not survive. In this case, the damage and thus the risks are beyond quantification. Normal risk management that compares numbers then becomes irrelevant. Normal risk management means we do it the best we can, and if we fail — perhaps because we have several plane crashes due to a software bug — then we learn from our mistakes. But if we crash the climate system, destroy civilization, then we can not learn from our mistakes. You only do that once.
The collapse of the climate system is an existential risk, and dealing with such risks requires a different approach. In international climate policy, it is currently said: We have a carbon budget that allows us to reach the 1.5 degree target with a 50 percent chance. But we would never board a plane if we only arrive in half the cases. Nor would we fly at a 66 or 80 percent probability. But this is the method in international climate policymaking.

What should the approach to risk management look like?

The IPCC should ask: what are the high-risk scenarios that could actually occur? Because these are much more likely than commonly known. The probability distribution has a fat tail. You have to look at these fat-tail results and then ask: what do we have to do to avoid that? We do not want a 50 percent chance that we will destroy human civilization or that the sea level will rise 25 meters. We want a 0.001 percent chance that this will happen. And that's not part of the debate right now. With the commitments of the countries under the Paris Agreement, the world is heading for more than three degrees of warming by the year 2100. And this value hides the feedback effects. If you take these into account, the true number is probably closer to four or five degrees.

How could it happen that humanity has reached a path of self-destruction? Where has the system - consisting of politics, economy and media - failed?

At the international level, with the IPCC and UN climate negotiations, we have a process designed to fail. Consensus is needed to do something, and consensus produces the lowest possible result because one country can veto it. Emissions are 50 percent higher today than they were when the UN climate talks began. We need a different model where some of the big players decide to act together — and then others follow.
At the national level, politicians have tried to put science in a political context. They tried to negotiate with the laws of nature. But the laws of nature do not want to negotiate with us. There is a political paradigm that states that the climate crisis is a problem among others that needs to be resolved. But the climate is not just another problem. If we do not solve the climate crisis, all the other problems of society become irrelevant.
And finally, the climate discussion was located within a neoliberal paradigm. This is yes, we can do something, but only if it does not affect any significant part of any economy in the world. This is a contradiction to itself. The coal, oil and gas industries must be abolished and that will destroy a lot of capital. But that is necessary.

And what about the economy and the media?

The economy has a very short time horizon and does not think 30 or 40 years into the future. It's about the stock market price in the next two or three years. The economy therefore ignores the climate problem, although it is known to the actors. The problem with the media was that there were not enough prominent people to tell the story as it really is. In the last two years, however, a new tone has found its way into the conversation. The UN chief now speaks of "existential risks" and says it is a "climate emergency". In addition, there are now the very brutal and direct statements by Greta Thunberg. So we finally have an honest debate about where we are. But it took too long to get there.

What would be an adequate answer to the climate crisis?

First, we need a "blood-sweat-and-tear speech" from the head of government, ideally after consultation with the opposition. They would have to say that we have analyzed the climate problem, and we understand that the risk is greater than commonly admitted. This is a moment of crisis — and it is not easy to talk about it. But we were chosen to protect people, and we have to be honest about that. We have to mobilize the whole society to find a solution. Some things will be painful, but the advantage is that in 50 or 100 years, we will still have a functioning society. If we do not act, then we do not have them. We will therefore put the climate crisis at the center of our attention, because that is the priority that deserves the problem. It is the "war speech".

In Anglo-Saxon countries, the fight against climate change is often compared to mobilization in World War II. You also do that in your study.

Of course, this is not a perfect comparison, because the war is about killing people — and the climate is about trying to save millions, if not billions of people. But the comparison shows what efforts are needed to give top priority to a problem. In 1942, the US spent 31 percent, Great Britain 52 percent, Germany 64 percent, and Japan 33 percent of its gross domestic product on the war. It's a story of society's ability to respond to an overwhelming threat.

In Australia, Great Britain and Germany, civil disobedience is increasingly occurring in order to draw attention to the climate crisis. Is that justified?

Civil disobedience has a long and venerable history. If you look at Gandhi or the civil rights movement in the US or Eastern Europe at the time of the turnaround: these were all events with massive civil disobedience. Disobedience is obviously a legitimate form of action when the political process is unwilling to react. Whether it is the only strategy that can achieve a result is a more difficult question. There are many different social groups. In Australia there are Farmers for Climate Action for example. Different groups will organize differently — and one should not dictate tactics.

Finally, a personal question: how do you deal with the knowledge that our civilization could be destroyed?

From a psychological point of view, this is a huge problem. You see it among young and old people, among scientists: there is consternation, fear, depression in the face of the prospect that human society might be so stupid as to create the conditions for its own demise. That's a shocking thought. It took me a while before I could articulate that. But after I did, I felt better because I was no longer fighting reality. I accepted that we could be so stupid. The Italian philosopher Antonio Gramsci once demanded "pessimism of the mind, optimism of the will". That's what keeps me going.