World acknowledges unprecedented climate challenge, so what should a Labor federal government do?

by David Spratt,  published at RenewEconomy 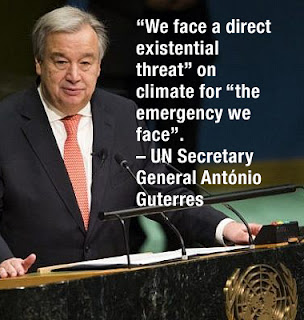 Quite suddenly, in the wake of the recent IPCC report, it's become commonplace to talk about a global climate emergency. Al Gore told PBS on 12 October: “We have a global emergency. You use a phrase like that and some people immediately say, ‘okay calm down, it can’t be that bad.’ But it it is."

On 9 October, a stunning editorial was published in the UK. “The Guardian view on climate change: a global emergency” opened with the sentence: “Climate change is an existential to the human race.” A year ago, that would have been extraordinary, but no longer. (An existential risk is one that poses permanent large negative consequences to humanity which can never be undone, or an adverse outcome that would either annihilate intelligent life or permanently and drastically curtail its potential.)

In many ways, the recent IPCC report on 1.5°C was too conservative, overestimating the length time till we hit  1.5°C, and failing to account for crucial feedbacks in the climate system. Yet the report's evidence was that 2°C of warming would be catastrophic in so many ways, including for sea-level rise, for coral systems, and for food and water security of hundreds of millions of people, if not more. The current Paris commitments are a path to 3.4°C of warming, and closer to 5°C when the full range of feedbacks are included.

But even an understatement of the evidence leads to radical conclusions. In response to the report's release, there was a certain shock and awe, for example by Jeff Goodell in Rolling Stone ("What’s Another Way to Say ‘We’re F-cked’?") and David Wallace-Wells in New York Magazine ("UN Says Climate Genocide Is Coming. It’s Actually Worse Than That").

“We face a direct existential threat” on climate for “the emergency we face”,  UN Secretary General António Guterres had told a New York audience on 10 September 2018, a month before the report was published.

Some Australian politicians have endorsed a climate emergency statement, and an Australian Senate report released in May this year recognised that: “(climate change is) a current and existential national security risk”. “It has never been clearer that we have a climate emergency on our hands,” Environment Victoria CEO Mark Wakeham wrote recently. “This is a climate emergency,” said Karin Nansen, chair of Friends of the Earth International, in response to the IPCC report.

None of this is new. Back in 2007, then UN Secretary General Ban Ki-Moon said of Antarctica and climate warming: “This is an emergency and for emergency situations we need emergency action.” “We respond well to an emergency, but global warming is an emergency too,” editorialised
The Age in January 2011. “We are now at a tipping point that threatens to flip the world into a full blown climate emergency,” wrote Tony de Brum, Marshall Islands political leader, Kelly Rigg and Mary Robinson, former President Republic of Ireland, in The Guardian in November 2013.

In July 2016,  President ACF Geoff Cousins, CEO Greenpeace Australia David Ritter, GetUp National Director Paul Oosting and 20 others endorsed a statement in The Age which started: “The Earth is already too hot. It’s time to declare a climate emergency.”  Last year, Naomi Klein declared: “We are living in a climate emergency of shocking proportions we never expected so soon.”

We have reached crunch time. “There is no documented historical precedent” for the speed and scale of transformative action needed to keep warming to 1.5°C, said the new IPCC report.  “Climate change is now reaching the end-game, where very soon humanity must choose between taking unprecedented action, or accepting that it has been left too late and bear the consequences,” wrote Prof. Hans Joachim Schellnhuberr, in a foreword to the recent report What Lies Beneath.

Climate Councillor and lead author of the recent “hothouse Earth” paper, Prof. Will Steffen, said in August that getting greenhouse  gas emissions down fast has to be the primary target of policy  and economics, with something “like wartime footing”.  An emergency response, akin to a wartime footing in terms of the size and scale of the response, is now absolutely necessary. And the reason is simple, as Prof. Steffen explained recently:


I think the dominant linear, deterministic framework for assessing climate change is flawed, especially at higher levels of temperature rise …model projections using models that don’t include these [feedback] processes indeed become less useful at higher temperature levels. Or, as my co-author John Schellnhuber says, we are making a big mistake when we think we can “park” the Earth System at any given temperature rise – say 2C – and expect it to stay there… Even at the current level of warming of about 1C above pre-industrial, we may have already crossed a tipping point for one of the feedback processes (Arctic summer sea ice), and we see instabilities in others – permafrost melting, Amazon forest dieback, boreal forest dieback and weakening of land and ocean physiological carbon sinks. And we emphasise that these processes are not linear and often have built-in feedback processes that generate tipping point behaviour. For example, for melting permafrost, the chemical process that decomposes the peat generates heat itself, which leads to further melting and so on.

The characteristics of an emergency response were described in a recent Breakthrough guide, How to explain emergency mode climate action.In particular, the guide emphasises two essential starting points:
So what should an incoming federal Labor government do? Here are six steps that could be taken straight away, without legislation.