Climate change an accelerant to instability in unexpected ways


This is an extract from Disaster Alley: Climate change, security and risk published today by Breakthrough National Centre from Climate Restoration.

A hotter planet has already taken us close to, or past, tipping points which will generate major changes in global climate systems such as the oceans, polar sea ice and ice sheets and large permafrost carbon stores. The impacts include a hotter and more extreme climate, stronger storms and cyclones, drought and desertification, and coastal inundation.

This makes climate change a key component in international relations as it aggravates pre-existing problems to function as a “threat multiplier”, causing escalating cycles of humanitarian crises, political instability, forced migrations and conflicts. The war in Syria and conflicts across the Sahel from Darfur to Mali have a major climate-change fingerprint.

A number of circumstances made the Syrian state extremely vulnerable to the consequences of the severe drought which hit the country a decade ago. Declining oil revenues and a fiscal deficit led the Syrian government to slash fuel subsidies in May 2008. The price of petrol tripled overnight, and pushed up food prices, whilst the state’s agriculture policies encouraged groundwater depletion. And Syria had already accepted 1.5 million refugees from Iraq. From 2006-2010, 60% of Syria had its worst long-term drought and crop failures since civilisation began. 800,000 people in rural areas had lost their livelihood by 2009. More than two million people were driven into extreme poverty, and 1.5 million people migrated to cities. The cities grew very rapidly, as did food and housing prices. The Syrian regime was unable to safeguard the people and protect their way of life, resulting in social breakdown, state failure, the rise of Islamic State and foreign military intervention. Global and regional climatic changes were major underlying causes and continued to exacerbate this already explosive situation.

Extreme weather and climate change also played a part in the “Arab Spring”. Per capita, the world’s top nine wheat importers are in the Middle East and North Africa. The region relies on food imports for more than 30% of calories consumed, making it highly vulnerable to global food price shocks. In 2010, a heatwave and wildfires in Ukraine and Russia, and a “once-in-a-century” winter drought in China, resulted in wheat shortages and a global wheat price spike, with bread prices rocketing across the Middle East. Food riots followed in Egypt, where basic food costs were already one-third of household budgets, and became one trigger for the Arab Spring.

The European migration crisis is a consequence of multiple conflicts, accelerated by climate change. This crisis was driven by the wars in Iraq and Afghanistan, the civil war in Syria, the Arab Spring, political disruption across the Maghreb, and drought, desertification and war across the Sahel.

These recent climate-accelerated conflicts also point to the changing character of the major players, and transcend old understandings, explains National Security Risks and the Accelerating Risks of Climate Change:


We are seeing the steady erosion of the nation-state as the primary international security entity. Non-state actors, such as globalized financial institutions and corporations, and even internet-empowered individuals — or the causes they represent — are having increasing impacts on the political landscape. The world has also become more politically complex and economically and financially interdependent. We believe it is no longer adequate to think of the projected climate impacts to any one region of the world in isolation. Climate change impacts transcend international borders and geographic areas of responsibility.

Australia’s near region includes communities increasingly threatened by climate impacts and the resulting effects including dislocation and migration.

Bangladesh is the “ground zero” of climate change impacts, says Maj. Gen. Munir Muniruzzaman, former military adviser to the president of Bangladesh and chairman of the Global Military Advisory Council on Climate Change. A one-metre sea level rise would flood 20% of the area of Bangladesh and displace 30 million people. India has already surrounded Bangladesh with a double strand “climate refugee” fence patrolled by 80,000 troops, in anticipation of a migration crisis.

Estimates of global average sea-level rise this century range from 1 to 2.5 metres, but that is just the beginning. In 2009, eminent climate scientist Prof. Hans Joachim Schellnhuber warned that 1°C of warming — the current state — would “in the long run translate into 15–20 meters sea level rise at equilibrium. 2°C — the target of the European Union — means sea level rise of 30–40 meters over maybe a thousand years. Draw a line around your coast, probably not a lot would be left”

The consequences of unabated climate change cannot be resolved by an emphasis on increasing militarisation, as demonstrated by the example of sea level rise. Nowhere is this clearer than in the case of climate-driven forced mass migrations, as the 2007 report The Age of Consequences explains:


Perhaps the most worrisome problems associated with rising temperatures and sea levels are from large-scale migrations of people — both inside nations and across existing national borders… potentially involving hundreds of millions of people. The more severe scenarios suggest the prospect of perhaps billions of people over the medium or longer term being forced to relocate. The possibility of such a significant portion of humanity on the move, forced to relocate, poses an enormous challenge even if played out over the course of decades.

Pakistan is a clear example of a country where the social and political landscape and susceptibility to climate harm are a potentially unstable mix. Increasing instability in Pakistan would contribute to the risk of instability in India and even China, which are key economic partners for Australia. 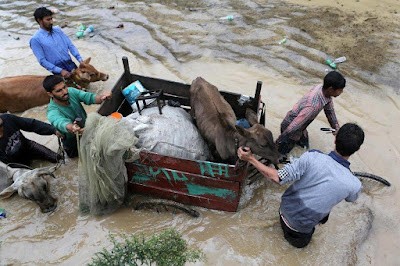 Pakistan is a pivot state between Central and South Asia. Salafist Islamist non-state actors play a significant role in conflict in Pakistan’s immediate neighbourhood and within the country. Armed opposition groups target energy infrastructure. The military and intelligence have a powerful say in politics, the Pakistani state has a direct interest in wars in neighbouring Afghanistan and in disputed Kashmir, and it is nuclear armed.

Climate change has contributed to recent record-breaking drought events. On 30 May 2017, the thermometer in Turbat, Balochistan hit 54°C, the hottest reliably measured temperature ever recorded in Asia. In 2010, devastating floods affected one-fifth of the land area and 20 million people, destroyed 1.7 million homes, and damaged 5.4 million acres of arable land. The damage was made worse by a shift in the distribution of monsoonal rainfall to areas of the country with poorer flood mitigation measures. Increases in the frequency and intensity of drought and flooding are consistent with climate change projections.

Pakistan will face severe water scarcity by 2025 and according to the World Bank is “one of the most water-stressed countries in the world”, driven by changing snow melt from the Himalayan/Karakoram ranges, more variable monsoons, increases in population, inefficient drainage practices, a shift in agriculture towards more water-intensive export cropping, and competing demands for water by the agriculture and power generation sectors.

Pakistan’s agricultural sector relies heavily on irrigation. 80% of agricultural land is irrigated (not rain-fed), the highest proportion in the world. Agriculture employs 45% of workers and cotton, textiles and clothing make up half of Pakistan’s exports.

In quantitative terms, cubic yards of surface water available per person fell from 6880 in 1951 some to 1,358 in 2010. By 2025 it is projected to decrease to 1046 cubic yards.
The Indus river system is the core of Pakistan’s water system and most flow comes from Karakoram glaciers in its headwaters. There is evidence that glacial changes may be reducing river flows. The Karakoram glaciers have stable or increasing areas and possibly mass — with reduced melt flows — and are behaving differently from rapidly retreating eastern Himalaya glaciers.

Competition for water between the agricultural and power sectors is already intense and is likely to increase.

Decreased flows in the Indus and decisions to allocate water to irrigation instead of power generation have been in part responsible for ongoing electrical blackouts. Power shortfalls in summer are up to half of demand, with power outages of up to 18–20 hours driving protests and increasing civil unrest. In one episode in 2012 rioters “burned trains, damaged banks and gas stations, looted shops, blocked roads, and, in some instances, targeted homes of members of the National Assembly and provincial assemblies”, reports Climate and Social Stress: Implications for Security Analysis.

The blackouts are “a contentious political issue with the potential to inflame Pakistan–India relations. The Pakistani foreign minister blamed the decreased flows on illegal water withdrawals upstream by India”, although the commissioner of the Indus River System Authority in Pakistan attributed them to climate change.