Note: Thanks to robertscribbler.com for this excellent post on the eye-popping circumstances of Arctic sea-ice this melt season. 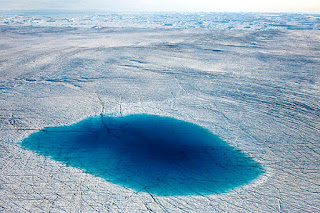 Near zero sea ice by the end of melt season. The dreaded Blue Ocean Event. Something that appears more and more likely to happen during 2016 with each passing day.

These are the kinds of climate-wrecking phase changes in the Arctic people have been worrying about since sea ice extent, area, and volume achieved gut-wrenching plunges during 2007 and 2012. Plunges that were far faster than sea ice melt rates predicted by model runs and by the then scientific consensus on how the Arctic Ocean ice would respond to human-forced warming this Century. For back during the first decade of the the 21st Century the mainstream scientific view was that Arctic sea ice would be about in the range that it is today by around 2070 or 2080. And that we wouldn’t be contemplating the possibility of zero or near zero sea ice until the end of this Century.

But the amazing ability of an unconscionable fossil fuel emission to rapidly transform our world for the worst appears now to outweigh that cautious science. For during 2016, the Arctic is experiencing a record warm year like never before. Average temperatures over the region have been hitting unprecedented ranges. Temperatures that — when one who understands the sensitive nature of the Arctic looks at them — inspires feelings of dislocation and disbelief. For our Arctic sea ice coverage has been consistently in record low ranges throughout Winter, it has been following a steepening curve of loss since April, and it now appears to have started to fall off a cliff. Severe losses that are likely to both impact the Jet Stream and extreme weather formation in the Northern Hemisphere throughout the Spring and Summer of 2016.

Melting more than Two Weeks Faster than the Early 2000s

Since April 27th, according to a record of sea ice extent provided by JAXA, daily rates of sea ice loss have been in the range of 75,000 square kilometers for every 24 hour period. That’s 300,000 square kilometers of sea ice, or an area the size of New Mexico, lost in just four days. Only during 2015 have we ever seen such similarly rapid rates of loss for this time of year.
However, this excessive rate of loss is occurring across an Arctic region that features dramatically less ice (exceeding the 2015 mark for the same day by about 360,000 square kilometers) than any other comparable year for the same day. In essence, extent melt is now more than a week ahead of any other previous year. It is two and half weeks ahead of melt rates during the 2000s. And this year’s rate of decline is steepening.

Current melt rates, if maintained throughout summer, would wipe out practically all the ice. And, worryingly, this is a distinct possibility given the severely weakened state of the ice, the large areas of dark, open water available to absorb the sun’s rays as Summer progresses, and given the fact that Arctic heat is continuing in extreme record warm ranges.

Furthermore, melt rates tend to seasonally steepen starting by mid June. So rapidly ramping rates of loss seen now, at the end of April and through to the start of May, may see further acceleration as more and more direct sunlight keeps falling on already large exposed areas of dark, heat-absorbing water.

Huge Holes in the Beaufort

All throughout the Arctic Basin, these sunlight-absorbing regions take up far more area than is typical. The Bering has melted very early. Baffin Bay is greatly withdrawn from typical years. Hudson Bay is starting to break up. The Barents and Greenland seas feature far more open water than is typical. However, there is no region showing more dramatic early season losses than the Beaufort.

This great body of open water the size of a sea in itself has now created a new early season edge zone for the ice. A place where a kind of mini-dipole can emerge between the more rapidly warming water surfaces and the cooler, reflective ice. Such a zone will tend to be a magnet for storms. And a low pressure system is expected to ride up an extreme bulge in the Jet Stream over Alaska and Canada and on into this Arctic zone over the next few days. Storms of this kind tend to hasten melt and break up of ice in the edge zones by generating waves, by pulling in warmer airs from the south, or by dropping liquid precipitation along the melting ice edge. And the fact that this kind of dynamic is setting up in the Beaufort in early May is nothing short of extraordinary.

Further to the north, high pressure is expected to continue to dominate over the next seven days. This will generate further compaction of the already weak ice even as it allows more and more sunlight to fall over that greatly thinned white veil.

Temperatures for the Arctic are expected to range between 2.5 and 3.5 C above average over the next seven days. Very warm conditions that will continue to hammer freezing degree day totals that have now exceeded an unprecedented -1000 since the start of the year in the High Arctic region above the 80 degree North Latitude Line. In layman’s terms, the less freezing degree days the Arctic experiences, the closer it is to melting. And losing 1000 freezing degree days is like removing the coldest month of Winter entirely from the heat balance equation in this highest Latitude region of the Northern Hemisphere.

From just about every indicator, we find that the Arctic sea ice is being hit by heat like never before. And the disturbing precipitous early season losses we now see in combination with the excessive, extreme warmth and melt accelerating weather patterns are likely to continue to reinforce a trend of record losses. Such low sea ice measures will also tend to wrench weather patterns around the globe — providing zones for extreme heatwaves and droughts along the ridge lines and related warm wind invasions of the Arctic that will tend to develop all while generating risk of record precipitation events in the trough zones. To this point, the North American West is again setting up for just such a zonal heatwave pattern. Extreme heat building up in India and Southeast Asia also appears to be following a similar northward advance.