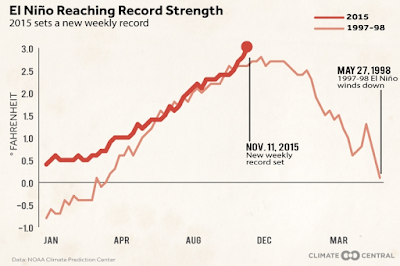 The various factors that scientists watch to forecast the near-term future of these events, including Kelvin waves and westerly wind bursts, suggest that ­the current El Niño will grow stronger. The model estimates th­at have most closely tracked the progress of this El Niño suggest that it will become the strongest on record when measured against the traditional three-month yardstick.

While this El Niño is unprecedented, it is not wholly unexpected. For several years now the oceans have been swallowing and drawing down much of the heat that has been accumulating in the atmosphere, including the extra heat trapped in the atmosphere by the growing blanket of carbon pollution. That heat is now reemerging.

Predicting how El Niños evolve in a warming planet is extremely challenging. The factors involved are far from well understood. However, the most recent model projections tell us that we may expect extreme El Niños (and La Niñas) to happen more frequently. Records tend to be broken when natural variation runs in the same direction as climate change, and this El Niño is moving along on a record-breaking path.

Global warming has already amplified this El Niño.  Together, these forces instigated the third-ever global coral bleaching event, which scientists expect will damage almost 95 percent of US coral reefs by the end of 2015. Global warming also supercharged this El Niño to drive a record-breaking storm season, with 23 Category 4 and 5 storms in the Northern hemisphere, far above the old record of 18 set in 1997 and 2004. Hurricane Patricia was the strongest hurricane ever measured, by some measurements.

Predicting exactly what this El Niño will do to extreme weather in the United States is challenging. We are now in uncharted territory. This El Niño is not only warmer where it counts, but its effect appears to be reaching much further west than El Niños in the past. It may also be connected to the record-breaking ocean temperatures along the west coast of Baja and further north.

There are also other extremely odd features in the climate system this year that can throw a curve ball into the complex work behind predicting El Niño-driven global weather patterns. One such example is the “the cold blob” in the north Atlantic that appears to be caused by ice water running off the melting Greenland ice sheet and is affecting ocean currents.


“Our scientific understanding of El Niño has increased greatly in recent years. However, this event is playing out in uncharted territory. Our planet has altered dramatically because of climate change […] So this naturally occurring El Niño event and human induced climate change may interact and modify each other in ways which we have never before experienced. Even before the onset of El Niño, global average surface temperatures had reached new records. El Niño is turning up the heat even further.”
-World Meteorological Organization (WMO) Secretary-General Michel Jarraud.

While the exact course of the extreme rains driven by this El Niño are difficult to predict with confidence, those rains are likely to be charged with extra precipitation added in by global warming. A warmer atmosphere holds more moisture, and just as a bigger bucket dumps more water when it empties, climate models project that El Niño rains are likely to dump more water wherever they ultimately fall.

For many other areas of the world, however, El Niño means drought. And here, too, climate change is likely to intensify the event, bringing hotter temperatures that dry out soils and melt snow packs. In California, the impact of higher temperatures on the state’s critical Sierra Nevada snowpack might offset some of the hoped-for precipitation brought by El Niño.

The regional features of our climate system are becoming harder to predict due to climate change. Disaster usually strikes when a threshold is crossed. Our economic infrastructure has been built to withstand the known historical extremes; similarly, our natural ecosystems have evolved to cope with those same extremes. When faced with new extremes, however, these systems often collapse. The rising unpredictability of regional changes like El Niño magnifies the risks we face from extreme events.