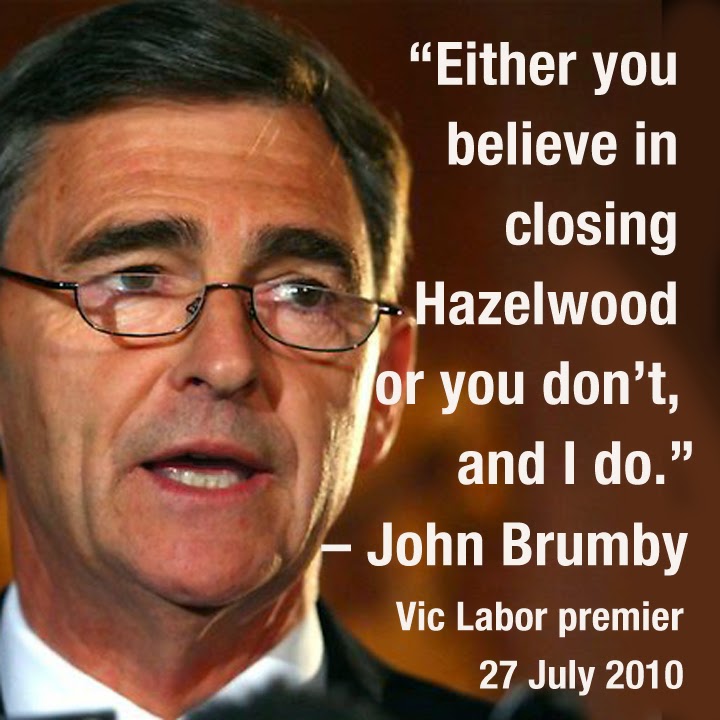 
…either you believe in closing Hazelwood or you don’t, and I do. And so what I announced yesterday was a staged closure of Hazelwood with the first two units – they have 8 units, it’s the dirtiest power station in Australia, most commentators by the way if, you’ve read the Financial Review this morning they would say it’s probably the dirtiest anywhere in the world – and I’ve put forward a plan that we will have a staged closure of it.

The need to move quickly to replace dirty coal with clean renewable energy and jobs was highlighted by a new report from Oxford University’s Stranded Assets Programme, which identifies the 100 global power companies most at risk from growing pressure to shut highly polluting coal plants.

The analysis, produced to help investors assess the risk of major financial losses, also found Hazelwood majority owner GDF Suez was third in the list of most polluting coal station fleets in the world.

The report identified the most-polluting, least-efficient and oldest “sub-critical” coal-fired power stations. It found 89% of Australia’s coal power station fleet is sub-critical, "by far” the most carbon-intensive sub-critical fleet in world.

The International Energy Agency calculates that one in four of these sub-critical plants must close within five years, if the world’s governments are to keep their pledge to limit global warming to 2C.  This means that 22% of Australia’s coal power station fleet must close within five years if we are to play an equitable part in keeping to government pledges to limit global warming to 2C.  [Within the IEA's carbon budget frame which has a high risk of exceeding the specified 2-degree warming target.]

How can Australia's climate action movement respond, and what actions and campaigns would be a commensurate response?

A recent report on "Australia's top 10 climate polluters" released by the Australian Conservation Foundation, found that just a handful of companies are responsible for nearly one-third of our nation’s greenhouse pollution through their production and consumption of energy.


Worse, many of these companies, rather than accepting the realities and pragmatically changing their investment choices and business practices, are applying pressure on governments to shackle the economy to last century’s energy staples, coal and gas, contrary to the global trends and signals.
The names of the 10 biggest polluters are not surprising. The inglorious rollcall includes household name energy retailers such as Energy Australia, AGL and Origin. Global mining company Rio Tinto makes the cut, as does oil and gas miner Woodside and aluminium producer Alcoa. There are also lesser known entrants such as GDF Suez, which runs the Hazelwood brown coal power plant in Victoria, and Queensland government-owned Stanwell and CS Energy.


I think the debate about whether the closure is going to occur is over and what we've really got to do now is look at the impact on the workers in the community. And what we're really saying is [that] on this occasion, as different to last time when they privatised the industry, we want the community and the unions to be involved at the table, involved in the discussions. And the decision-making… when they privatised the industry we were saying then that there needs to be replacement industries in the valley. We were talking about wind and solar then. And if the national and State governments had have got off their behinds then, then we could have had a whole range of different industries in the Valley that could help us out of this situation. These can be done, but there needs to be some real effort at a State and national level and that's not really being seen at all at the moment…