Tipping points, often an expression of non-linear events, are difficult to project. But if it is sometimes hard to see tipping points coming, it is also too late to be wise after the fact. Estimated tipping points around or below ~1.5ºC include:


In summary, there is a very high risk that further significant tipping points will be passed before warming reaches 2°C. Some of these are irreversible on time scales of centuries to a millenia.

The failure of international climate negotiations and insufficient national efforts have led many negotiators and commentators to conclude that warming will not be held to 2ºC and much higher warming is likely. This has resulted in a policy approach of still trying to reduce emissions (mitigate) for 2ºC, whilst also planning to adapt to 4ºC of warming.

World Bank (2012) and Price Waterhouse Coopers (2012) reports complement a range of research that suggests the world is presently heading for 4ºC or more of warming this century. Global average warming of 4ºC means around 6°C of warming over land, and perhaps 7–8°C at the extremes. IEA Chief Economist Fatih Birol says that emission trends are “perfectly in line with a temperature increase of 6°C, which would have devastating consequences for the planet” (Rose, 2012). 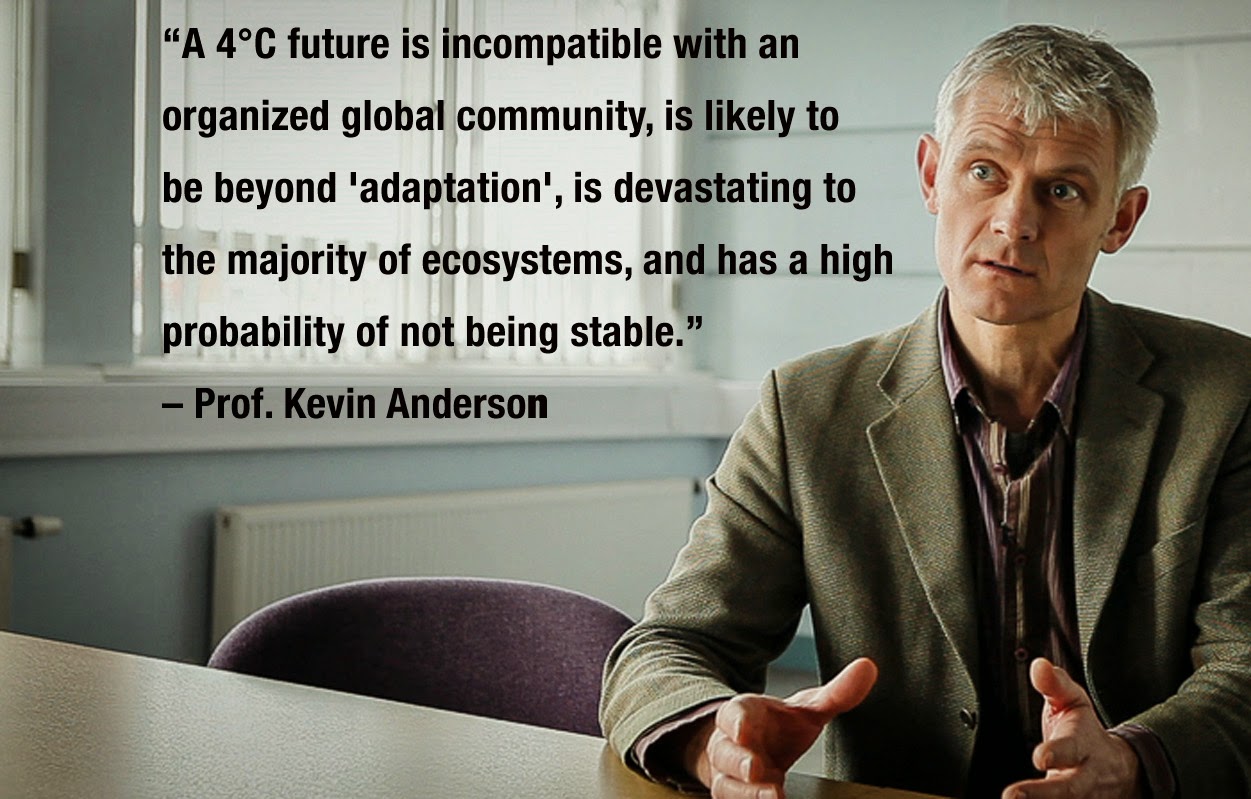 The notion that we can reasonably adapt to 4°C is ill-founded because:
One question remains: if the world has practically speaking given up on holding to 2°C and it is not possible for human civilization to survive in a 4°C warmer world, what’s the plan? Some have suggested that in fact we have a substantial “carbon budget” available for the 2°C target…

Myth 5: We have a substantial carbon budget left for 2°C

The carbon budget has come to public prominence in recent years, including in the IPCC’s Fifth Assessment Report in 2013, as being the difference between the total allowable greenhouse gas emissions for 2°C of warming, and the amount already emitted or spent.
But this is not as simple as it seems, because 2°C means different things to different people:
With this distinction between “cap” and “target” in mind:
The idea of a carbon budget and “allowable” emissions is dangerous, according to climate scientist Ken Caldeira:

Finally, we need to remember that the current level of greenhouse gases is already enough for more than 2°C of warming, though some gases such as methane are relatively short-lived in the atmosphere. Ramanthan and Feng (2008) calculated that the observed increase in the concentration of greenhouse gases (GHGs) since the pre-industrial era has most likely committed the world to a warming of 2.4°C (within a range of +1.4°C to +4.3°C) above the pre-industrial surface temperatures.