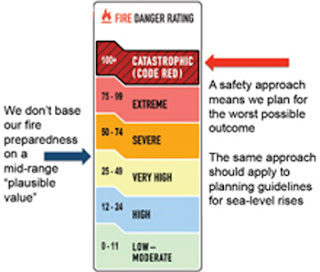 In assessing risks, it’s pretty basic that you assess the full range of possible future events, and the costs and benefits associated with each outcome. The more extreme outcomes at the edges of the range of possibilities may be considered less likely, but are often associated with very high costs and – in the case of climate change – catastrophic outcomes.
On rising sea levels and coastal inundation due to global warming, that’s precisely what the Australian government is NOT doing.  While the science has for years projected sea-level rises in the range of 0.8 to 2 metres by 2100, the Australian government plods along spending tens of millions of dollars on consultants and adaptation research on the assumption that the rise will not exceed 1.1. metres.
This madness is the subject of a submission authored by LIVE and myself to the current Senate Standing Committees on Environment and Communications Inquiry into Recent trends in and preparedness for extreme weather events (It is #10 here).
The submission explains how the Australian government —having recognised that 2 metres was about the upper limit for sea-level risk assessments — then engaged in verbal gymnastics, flipping from “worse case scenarios” to “mid-range” to “plausible range of sea-level rise values” without a coherent explanation.
So Climate Minister Wong told ABC “Insiders” on 15 November 2009 that:


The sea level rise of up to 1.1 metre…. is at the high end of the scenarios.

Trouble isn’t, neither statement was true.
And whilst Australia’s “high scenario” stands at just 1.1 metres, others including the United States’ government and the European Union are taking a different approach in recognising that more extreme events are possible, and need to be assessed.
A new report published last month by the US Department of Commerce and the National Oceanic and Atmospheric Administration notes that:

The report says that “identifying global mean SLR estimates is a critical step in assessing coastal impacts and vulnerabilities” and recommends four scenarios:
And since submitting to the Senate inquiry, another gem has come across my desk, this time from the U.S. Army Corps of Engineers.    In November 2011, the U.S. Army Corps of Engineers released updated guidance to Engineer Circular (EC) 1165-2-211 (2009) “Incorporating Sea-Level Change Considerations in Civil Works Programs.” The guidance series has a two-year lifespan, leading to the new 2011 release. This 2011 update includes:


...additional references and discussion reflecting recent advances and understanding of sea-level change since 2008-2009, including a statement that a credible upper bound for 21st century sea-level rise would not exceed 2 meters. This statement is based upon recent peer-reviewed articles by several authors using different methods but arriving at similar conclusions.

And where is Australia?  Hoping that the worst-case scenarios just won’t happen? That is certainly something this nation does not do when it comes to bushfire preparation.

Our propositions to the Senate Inquiry are:
Let’s hope that the Inquiry holds public hearings and these issues get a proper airing.