Climate change is making our planet hotter and wetter on average, but also drier in some places including southern Australia, and with more extreme events as the total amount of energy in the climate system increases.

So how hot will hot be? One answer comes from Andreas Sterl and 10 colleagues from the Royal Netherlands Meteorological Institute and Institute for Marine and Atmospheric Research at Utrecht University. In “When can we expect extremely high surface temperatures?”, they ask how extreme would temperatures be at end of this century if the global average temperature were to increase by 3.5C by 2100 compared to 2000 (based on the IPCC scenario known as A1B).


And 3.5C (or more) is where we are heading. If all the commitments made by governments around the world to reduce greenhouse gas were honoured, and nothing further done, then temperatures by 2100 would likely be about 4 degrees warmer than 1900, around 3.4C warmer than at the start of this century.

Sterl and his team project what the hottest that could be expected in a 100-in-a-hundred-year event, known at a T100 value. Or to be precise, “the annual-maximum 2m-temperature that on average occurs once in 100 years” (temperature 2 metres above the surface). Statistically, such an event may not happen in a 100 years, but it may also happen more than once, as we saw last summer in a series of “100-in-a-hundred-year” events in eastern Australia. 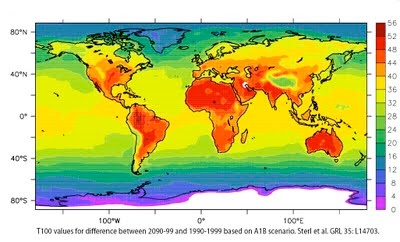 Sterl’s findings are displayed on the map. The deep red colouring most of Australia is the range between 48 and 52 degrees Celsius. The remainder in deep orange is 44-48C. By way of comparison, Australia highest recored temperature was 50.7C (123.3F) on 2 January 1960 at Oodnadatta, South Australia. Extreme heatwaves across southern Australia during late January/early February 2009 set a new Melbourne maximum temperature record of 46.4C, and a new State maximum temperature records for Victoria of 48.8C at Hopetoun.

As the authors note, “According to this figure, temperature extremes reach values around 50C in large parts of the area equatorward of 30 degrees. This includes heavily populated areas like India and the Middle East... projected T100 values far exceed 40C in Southern Europe, the US Mid-West by 2090-2100 and even reach 50C in north-eastern India  and most of Australia. Such levels receive much too little attention in the current climate change discussion, given the potentially large implications.”

Little wonder that Prof David Karoly of Melbourne University, in addressing future fire risk in Australia at the Oxford's "4 Degrees and Beyond" conference in September 2009, concluded that “We are unleashing hell on Australia.”